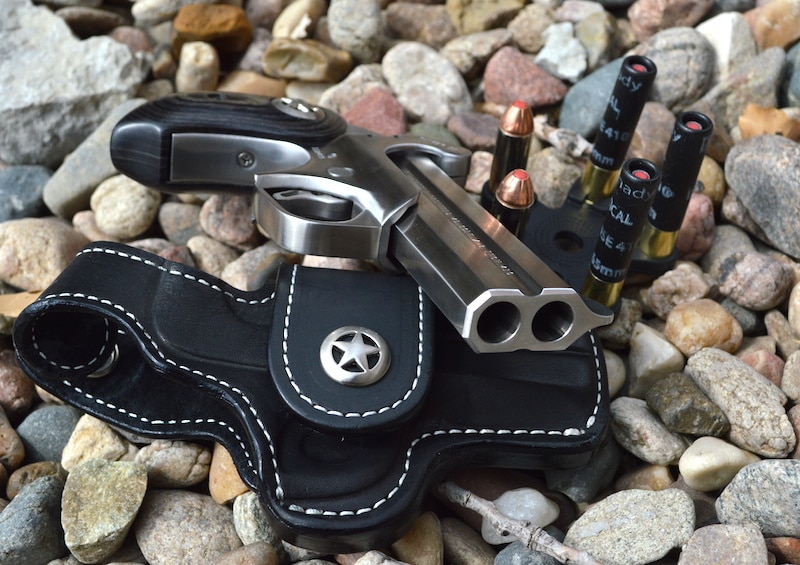 Granbury, Texas is not one of the huge meccas of the Lone Star state, but one very notable business has made its home there: the now famous Bond Arms.

Last year, I toured the factory and left so impressed that I ordered two different guns plus an extra barrel. The first gun I reviewed was the Texas Defender, which is an extremely compact .45 ACP double barrel pistol. For the second Bond Arms gun, I choose the Ranger II, which features a 4.25″ .410/.45 Colt barrel with a finger guard equipped frame and extended hardwood grip. Unique to the Ranger series is that it also includes Bond Arms custom leather horizontal belt holster, which makes this combo a great personal protection option. Not only is this gun and holster beautifully crafted, the gun is actually a whole lot of fun to shoot ever with full power .410 defensive rounds.

As noted in my Bond Arms factory tour article, one of THE features of the Bond Arms handguns is that any barrel length and caliber offered by Bond Arms can be swapped out with any Bond Arms frame and vise-versa. Gordon went a step further and created sets of various grips and grip sizes. All the Bond grips can be swapped between the frames. Technically, all the Bond Arms frames are the same, though some models feature different finishes or have a removable trigger guard, so if you have a Bond barrel, it will fit on any Bond lower receiver. Honestly it is dizzying to think of all the combinations, but in this case the Ranger II is a standard Bond Arms receiver with removable trigger guard, extended hardwood grip, and 4.25″ .410/.45 Colt barrel.

The longer 4.25″ length was designed to add velocity, deliver a little more accuracy, and take a little bite out of shooting .410 rounds in a handgun. There are a lot of folks who carry Bond Arms handguns as their defensive firearm and more than a few requested a carry package and the Ranger II was created.

Realistically, I never thought that I would want to have an afternoon plinking session with the Ranger II loaded with .410 shells, but that is exactly what happened after realizing the recoil was really quite manageable, even for folks like myself who are recoil sensitive (I have two steel plates in my right arm).

Just like any of Bond Arms handguns the operation and loading is simple. Push down on the left hand side action lever and the action will pop open, drop in two rounds, close the action, assure the safety is pushed to the right (fire), cock the hammer and pull the trigger to fire the first round, and cock the hammer and pull the trigger to fire the second round. Bond Arms feature and automatic firing pin selector which automatically moves to the next barrel with each cocking of the hammer. Is it as fast as pulling the trigger twice on your Glock? No, but it is surprisingly fast and if you have been brushing up on your Cowboy Action Single Action Revolver skills, its quite fast.

Stunningly, I hammered through over five boxes of various .410 shotshells and two boxes of Hornady .45 Colt rounds and it was a blast. BB and buckshot rounds were a bunch of fun on 10-yard cans, but the pattern really opens up quick out of a rifled 4.25″ barrel. #4-8 shotshells would be awesome on closer range pests and snakes. I found that a general rule was that upland game shot delivered 1″ group size for each foot you were away from the target. For example, at 10 feet a #6 shotshell would deliver around a 10″ group.  A good rule of thumb for the Buckshot rounds was a 1″ group for every yard away from the target – a target 10 yard away would deliver a 10″ group. So basically I was just shredding cans at 10 yards and could hit them blindfolded.

These are not target pistols — the Bond Arms pistols are short barreled defensive pistols, so you cannot hold them to the same accuracy standards. Realistically shots beyond ten yards take some practice.  Of note, there is difference in point-of-aim between the top barrel and bottom barrel, but if you hold center of mass you will consistently deliver gut and chest hits. If you want to shoot for groups, pick a barrel and cycle through shooting groups with that chosen barrel, otherwise you will end up with a 2” top group and about 4”-6” lower another 2” group with the respective barrels.

Naturally, the longer the barrels such as the 4.25″ barrel on the Ranger II deliver better the practical accuracy.  Similar to my spare .357 Magnum barrel, I was able to deliver 50-yard offhand shots on full sized Action Target Silhouettes while keeping most shots within a large pie plate sized ring. Due to the legality and spread of the .410 defensive rounds, I would not personally take a 50-yard shot with buckshot or with a defensive multi-projectile .410 round, but this demonstrates the flexibility of two barrels and the .410/.45 Colt chambering.

My typical carry method for the pistol is to have one barrel loaded with a Hornady Critical Defense .410 defensive multi-projective round and the other barrel (cycled to shoot first) with a Hornady Critical Defense .45 Colt defensive round. Based on typical defensive shots fired, ranges, and likely encounters, I feel pretty confident that two shots and having the ability pistol whip someone with a 2lb piece of stainless steel should take care of pretty much any reasonable issue I could encounter.

The vertical driving custom leather holster also deserves special attention because it really makes the Bond Ranger II a versatile and practical carry gun. In many cases the rig is far more comfortable than a strong side holster. The holster itself is a gorgeous work of hand made leathercraft and compliments the look of the Bond Ranger II perfectly. Honestly, this is such a beautiful setup it would be a shame to cover it up for concealed carry, so I hope you have open carry in your state if you pick one up.  The holster is set up to allow nearly instant removal or attachment via a heavy duty Velcro wrap over design. It is a great setup for those who will be going in and out of “gun free” buildings. Cross drawing from the holster is smooth and fast only requiring the release of an ergonomically placed thumb break button closure.

The Bond Arms have proven to be infallibly reliable and easy to shoot. Add in a premium quality not found on most guns these days and you have a tough to beat firearm. Sure, on almost any given day, I have a Walther PPS, Glock 26, 19, or 17 on my hip, but there are times and places such a driving where having a vertical carried firearm is more comfortable and accessible as a backup or primary firearm.

Admittedly, I wanted the Ranger II as a complimentary firearm for my Ruger Match SASS Vaquero set to add to my Single Action Shooting Sports (SASS) rig, but I have found that it is far more versatile than just a competition gun for cowboy action shooting. Yes they have a derringer division in SASS.

There are very few guns that you will find me recommend just because I think they are gorgeous, but the Bond Arms Ranger II is one of them. Beyond the impeccable quality, fit and finish, the Bond Arms Ranger II is a rock solid, hyper-dependable defensive firearm. With that noted, it is still a beautiful pistol that is fully capable with some training to be used for self-defense and one which I carry proudly when the need arrises.