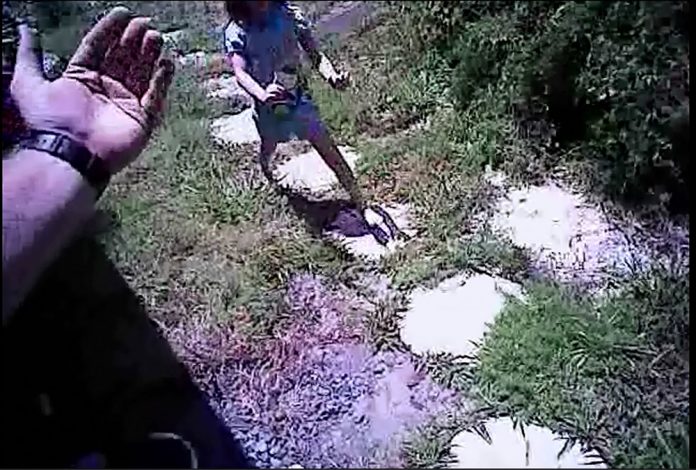 A Florida sheriff’s office released video of the heroic efforts of its deputies saving a wounded mother and her kids from her estranged husband amid gunfire.

“When we say law enforcement officers run toward danger as others run away, this is what we’re talking about,” said the Volusia County Sheriff’s Office in a statement about the recording.

Footage captured by the first-responder’s body camera shows Deputy Justin Ferrari jump out of his patrol car at the sound of gunfire, run toward his fellow deputies and ultimately drag the shooting victim and later her kids to safety.

“We believe it’s a compelling example of the heroic work these law enforcement officers are prepared to do every day,” the office said.

The video shows Ferrari responding to a domestic quarrel on Sunday afternoon between Victoria Rosado, 29, and her estranged husband, Emmanuel Rosado, 26.

In the video, Ferrari jumps out of his car after hearing gunfire and runs to a fellow deputy who has his weapon drawn. Victoria, who was shot in the back of leg, screams as she crawls out of the house, so Ferrari runs to her and pulls her to a neighbor’s house as gunfire erupts in the background. She tells him her kids are still there. After she’s safe, he checks the front of the house and the back before running back to get the three children.

The domestic quarrel occurred early Sunday afternoon. On a call with police, Victoria told authorities she had been trying to separate from Emmanuel, but he refused. After she asked him to leave the house, he kept breaking into her bedroom where she sought refuge.

After several minutes on the phone, she screamed and the line went dead. That’s when deputies reported multiple shots fired in their direction through a door and window. Two minutes later, more shots were fired at the deputies.

At some point during the shooting, the deputies heard Emmanuel inside the house say “You’re going to die tonight!”

Two deputies returned fire, but the suspect wasn’t hit. After Victoria and her kids were out of the house,Emmanuel came out of the back of the house as ordered by deputies and was immediately taken into custody.

Victoria was airlifted by helicopter to a nearby hospital for medical treatment. No deputies were injured in the exchange.

Emmanuel has been charged with three counts of attempted first-degree murder for shooting his wife and at the two deputies. He was booked in a county jail where he is being held without bond.

The sheriff’s office said deputies have responded to reports of disturbances at the home on two other occasions.