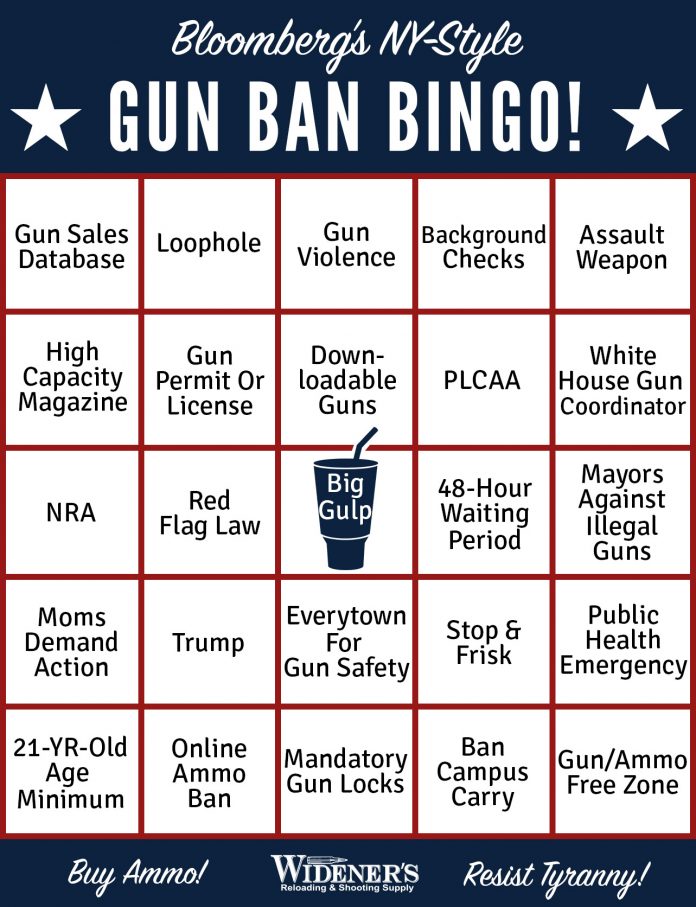 From our friends at Widener’s

We typically try to keep things fairly apolitical here at the blog. But this week, I know a lot of our fellow staunch 2nd Amendment supporters have an eye fixated on politics. Michael Bloomberg, an outspoken politician supporting his own brand of gun control seems to be gaining traction as a legitimate major party candidate for President of the United States.

While we don’t dare tell you how to vote… if a man painted as a villain by the National Rifle Association for more than 20 years is making a serious run, we figure we might as well have some fun with it.

Get your markers ready, the Nevada Democratic Primary Debate is our first chance for Gun Ban Bingo!

Get your board at the top.

How do you play? Well, it’s easy. Keep your bingo card and ammo handy during any debate Michael Bloomberg is a part of. When you hear him or one of the other candidates mention any of the topics listed on the Bingo card above, mark the spot with your favorite round of ammo. Complete a row, and you’ve got yourself a bingo! We suggest shouting it from the rooftops.

Bloomberg and the NRA

Bloomberg’s fight with the NRA goes back nearly two decades. The fight may have taken a turn from petty annoyance to all-out rivalry in the mid-2000s.

In some ways, Bloomberg inherited a lawsuit brought by the City of New York against several gun manufacturers in 2000. Rudy Giuliani was New York City Mayor at the time. He filed the suit seeking no monetary damages. Rather, he insisted that gun manufacturers were marketing their products in ways that helped promote straw purchases.

In 2004, Bloomberg was New York mayor and his office amended that lawsuit. A year later, the 2nd U.S. Circuit Court of Appeals rejected the city’s claim. The court granted the firearm manufacturers immunity under the Protection of Lawful Commerce in Arms Act (PLCAA). This law prohibits gun makers from being held liable for crimes committed with their products.

While the National Shooting Sports Foundation was also heavily involved in defending the industry in that case, the suit put the PLCAA on national display. Plus, it marks one of the biggest early fights between Bloomberg and the NRA.

The candidate often points out he doesn’t feel his plan violates the 2nd Amendment rights of any Americans. However, many gun owners might find points of Bloomberg’s platform goes a little farther than what they’d consider reasonable regulation.

For instance, Bloomberg is calling for the following changes or policies:

Everytown for Gun Safety is managed by a million-dollar team of five full-time executives and a handful of part-timers, according to Internal Revenue Service filings.

Several smaller groups fall under the Everytown umbrella. You’ve likely heard of some of them – Moms Demand Action, Mayors Against Illegal Guns and Students Demand Action are some examples.

CNBC reported Bloomberg himself donated $38 million to Everytown for Gun Safety in 2018. That’s a little more than half of what the group raised in funds that year. Accordingly, much of that money went toward localized issues and races.

For example, Everytown spent just shy of $3 million in the state of Virginia in 2019. This shaped the state legislature, introduced us to something called “ammo free zones”, helped spur a gun sanctuary movement, and powered a highly-publicized showdown with 2A supporters. (A fight that 2A supporters appear to have won for now.)

Not aware of the animosity between the National Rifle Association and Everytown? A quick Google search analyzing the Everytown website reveals the organization named the NRA on more than one thousand different occasions. Taking the fight further, Everytown filed a complaint with the IRS about the NRA’s tax-exempt status in April 2019. In their complaint, Everytown cited a report done jointly by The New Yorker and an outlet called The Trace. The Trace is a media outlet that was born with seed money from, you guessed it, Everytown for Gun Safety.

So, you may or may not have a vote in the Democratic race this primary season. Despite that, no matter which side of the political aisle you fall, hopefully, you now have a good feel for the background of Bloomberg’s gun policies, his battles with the NRA and maybe even scored yourself a bingo along the way!