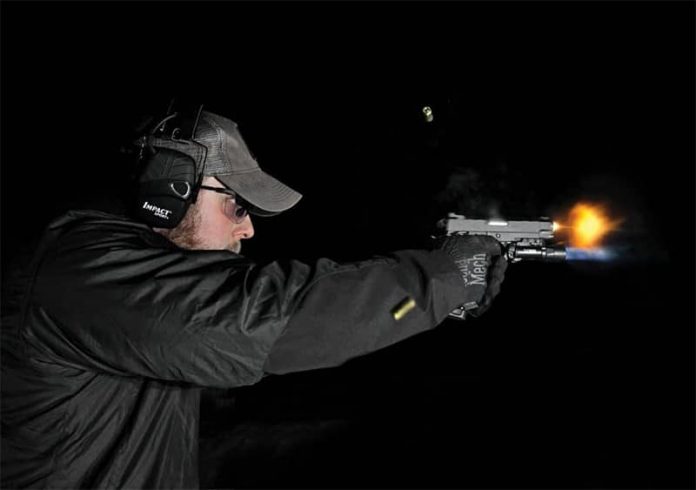 A high-capacity 9mm 1911 from a maker who has built guns for many champions.

The Merriam-Webster Dictionary defines “hex” as a verb meaning to practice witchcraft, or to affect as by an evil spell. However, among the Pennsylvania Dutch, hex signs symbolizing good luck are a long-standing tradition. What has this to do with the STI Hex-Tac pistol, which draws its name from the hexagonal sculpting of the grasping areas on its slide? Well, for one thing, it gives a writer a hook when writing about yet another 1911 pistol. But this is far from just another 1911. The STI brand has long been a favorite among champion shooters. The company is famous for high capacity 1911 pistols that often find their way into the winners’ circles at U.S. Practical Shooting Association matches, and I’ve lost count of how many top competitors I know who swear by the brand for reliability and overall function.

Our test gun is the Hex-Tac 4.0 in 9mm, the designation coming from the hexagonal cuts in the slide grasping area that we mentioned, and the pistol’s 4-inch (actually 4.15-inch) barrel. A lot of thought has gone into the ergonomics of this gun. Those “hexes” on the slide (fore and aft, in the current fashion) really do give the shooter excellent traction for both routine and emergency manipulation. The hexagonal theme is carried into the shape of the hammer, too, and I don’t think it’s just for style or symbolism: the raised edge of the hex point just behind the hammer is easy for the support hand thumb to catch when cocking the pistol. Why cock a pistol of a type most agree should be cocked and locked when loaded? Folks who have trouble racking slides (and there are many who do) will find it a lot easier on hammer-fired guns if they can thumb the hammer back first, relieving mainspring pressure. It’s also handy when dry-firing a single-action pistol such as this one. The Hex-Tec is particularly well-suited for this.

The wide-body grip is glass-filled polymer, checkered 30 lines per inch across its broad front; that and the checkered mainspring housing are complemented by flat diamond-checkered grip panels. Once in hand, grasp was extremely secure. The ambidextrous thumb safety was well-adjusted: quick on and easy off. For those who like a finger-forward grasp, the front of the trigger guard is checkered also (25 LPI).

A single steel bodied magazine was supplied with the test gun. Unloaded, it measured 5.7” from the forward tip of its follower to the bottom front of its floorplate. It held 21 rounds of 9mm Parabellum, with one more in the chamber, of course, and there was still enough flex in the magazine stack that when slapped into the gun with slide forward during tactical reloads or administrative loading, it locked solidly in place without requiring extra effort.

One-handed emergency manipulation has not been ignored. The rear sight is the excellent Heinie Ledge, so called because its forward face is a surface that allows the user to hook it against belt or edge of holster to run the slide one-handed without losing firing grasp (finger, of course, being completely clear of the trigger guard). That Heinie rear sight also has a big, square notch that made my eyes happy and coordinated well with the red fiber optic front post.

The now seemingly obligatory accessory rail is present on the front of the frame. I found lights by SureFire and Streamlight to fit fine and work fine thereupon. With the 4.15” barrel of this particular pistol, the muzzle area sits behind the front of the attached light unit. This creates stand-off capability. That is, if the front of the pistol has to be pressed against the opponent’s body in a do-or-die fight, a standard 1911 including this one will go out of battery and fail to fire . . . but the light ahead of the muzzle can keep that from happening.

On the Lyman Digital trigger pull gauge, test Hex-Tac averaged a very consistent 5.74 pounds measured from the center of the trigger. Five and three-quarter pounds is generally considered heavy for a target pistol, but is right in the ballpark for a trigger on a “street 1911” designed to be used in the stress of life-or-death self-defense. The trigger pull had significant light take-up before it “hit the wall” of firm resistance, and then a short and comfortable “roll” to the break of the shot.

Speed reloads were kinda bipolar with our test sample. On the one hand, the tapered mag couples with a flared competition-style mag well to deliver super-fast insertion, and the slide stop—low profile so a straight-thumbs hold will neither override it nor inadvertently activate it in the midst of a string of fire—is still easy for a right-handed shooter’s support hand thumb to hit. On the other hand, though, the magazine release button was rather small, and its spring really strong—each of us on the test team had to move the gun in our hand to get enough leverage to pop the spent magazine out. (Since there was only one magazine with the test gun, each of these elements had to be tested separately.)

Accuracy? From 25 yards off a Matrix rest on a concrete bench, Federal’s soft, standard pressure 115-grain JHP put five shots in 2.35” and the best three of those in 1.20”. SIG V-Crown 124-grain JHP beat that slightly with 2.15” for all five hits and 1.05” for best three. 147-grain Winchester Winclean training ammo turned in 2.90” for the five, and 0.90” for the three best. All measurements were done center to center of the farthest apart bullet holes, to the nearest 0.05”.

Hand held from the bench, the five shot groups are good predictors of “shootability” in human hands under ideal conditions, and the best three measurement eliminates enough human error to get a good approximation of what all five would have done from a machine rest. With half of the loads going under an inch for the latter measurement, we see the inherent accuracy STI has become famous for. This pistol did show a slight “4+1 syndrome,” a term coined by fellow gun writer Wiley Clapp for when the first hand-chambered round goes somewhat awry from where the subsequent automatically-cycled rounds hit. With the Hex-Tac, the first shot always went to 4 o’clock…but, as the group measurements show, not very far in that direction. Grouping was spot on for elevation and slightly right for this shooter’s eye.

Reliability? In hundreds of rounds, we only had one malf we could blame on the gun, a Winchester ball round that went vertical in the magazine and caused a 12 o’clock misfeed. There was also a Winchester 147-grain cartridge that wouldn’t fully enter the STI’s tight chamber because the round was out of spec, and a light competition handload that didn’t have enough oomph to cycle the slide. I can’t blame the gun for the last two.

Because the long magazine provided protrudes significantly from the butt, and there is that flower pot-size competition style mag chute there to begin with, it was clear from the beginning that this pistol was not designed by STI for concealed carry. Open carry, where (let’s face it) the idea is that people can see the gun, is a different story. I open carry on my own property and range, and the Hex-Tec packed rather comfortably in a Yaqui Slide style holster from Galco. One thing a lot of folks miss about the flared mag chute is that it’s not just for fast reloading, it also provides a bearing surface for the bottom edge of the little finger of the support hand, assuming that all four of the support hand fingers are below the trigger guard, and helps a bit to lock in a really solid hold. Let me note that the mag chute is removable, and a shorter (15 round) magazine can be ordered from STI, the combination of which will make this pistol a whole lot more concealable.

With 22 rounds of something like Winchester 127-grain +P+ on board, the home defender who stores his or her pistol in a static location might find the Hex-Tac ideal. A quarter century ago, I built a dedicated home defense Beretta 92 with Jarvis action, 6-inch Magna-Ported barrel, 20-round 9mm Beretta 93 machine pistol magazine and a period SureFire gun light. The STI duplicates that in a lighter, more compact package with one more round, and the 1911 ergonomics so many of us love. Since I don’t sleep with spare magazines on, this full-up hi-cap with TLR-1 light mounted and Stinger light in adjacent charger, both by Streamlight, comprised a very comforting “bedside home companion.”

Priced at $2599—a price consumers seem happy to pay for popular, high quality STI pistols—the Hex-Tac is a “good hex,” and there are more reasons to buy one than “just for the hex of it.” See it at you forearms retailer, or contact STI International, Inc., Dept. OT; Tel.: (512) 819-0656; Web: www.stiguns.com