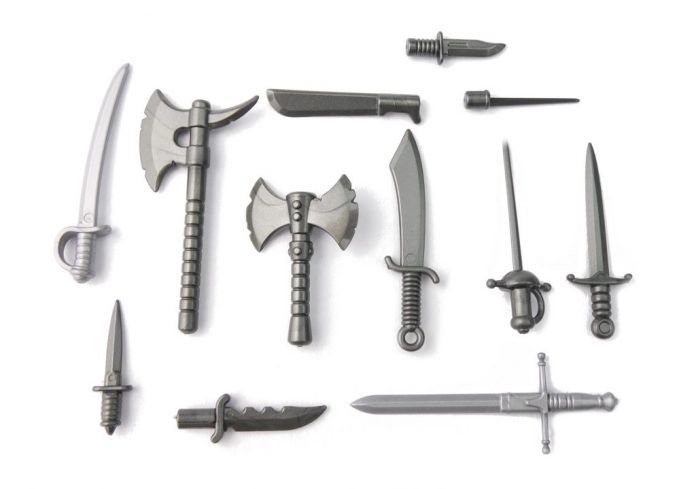 Knives are the most common, but this also includes hatchets, axes, swords, kukris, machetes, tomahawks, spears and the list goes on and on. It is unlikely that the average citizen is aware of the vast diversity of bladed weapons, which are probably mankind’s second weapon development (following the caveman’s impact weapon, the club).  (For an overview of the variety of bladed weapons, see www.smkw.com and www.ltspecpro.com.)

If you talk to many police officers, most will tell you they would rather be shot than stabbed.  If this seems strange, consider the differences between gunshot wounds and those from bladed weapons.  When some people are shot, they don’t even realize it and keep on fighting; it is not unusual that police must shoot suspects multiple times to end the fight, especially when the suspect is mentally ill or under the influence of illegal drugs. On the other hand, cuts—even minor ones—are very painful.

When gunshots hit the extremities they may not be fatal. They can also create the classic “through and through” wound when they enter the body on one side and exit from the other, without hitting an artery or vital organ. Some bladed weapons are capable of chopping off an extremity (or even a head) with one blow; thus bulletproof vests offer little protection.  Second, bladed weapons can easily sever an artery in a leg, arm or neck: unless medical intervention is immediate, the person will bleed to death very quickly. Third, bladed weapons can pierce a vital organ.  Last but not least, a puncture wound to the chest can cause an acute pneumothorax (collapsed lung), which can be fatal.

From PreparedGunOwners.com: “Obama LIED again – more people mass murdered by Knife attacks in China than with Guns in America” which was written on January 7, 2016.  From John Lott, PhD: “For the average multiple victim Chinese knife attack since 2010: 4.4 people were killed, and 14.5 injured.  Excluding the Kunming Railway Station attack the average is: 3.1 people killed and 8.6 injured. If you look at all the cases where at least 4 people were harmed the average attack had: 4.7 people killed and 15.8 injured.”  Bladed attacks occur all around the world but are rarely reported in our mainstream news media.  Britain also, which has very strict gun controls, has seen a frightening increase in knife attacks over the last several years.

Terrorists have discovered the lethal combination of vehicles plus hand weapons, running as many people down as possible then getting out and shooting or stabbing survivors.  Such attacks have occurred in Europe and the U.S., and I expect these to increase due to easy access to both vehicles and knives.  And the largest terrorist acts are still being accomplished with airplanes, explosives, and fire.

Serial killers frequently prefer knives, as there is no forensic evidence such as bullets or shell casings and no unnecessary sound.  Bladed weapons are cheaper and easier to obtain than firearms, and do not require the rigorous licensing process for purchase or permitting to carry. You are very likely face an attacker armed with a blade during a robbery, rape or home invasion.

Massad Ayoob’s core advice about knife fighting can be paraphrased as: “You may well kill your attacker with your knife, but he won’t die until 3 hours after he has killed you!”  Yes, I carry a “Missouri legal” folding knife, but see this as a last ditch self-defense tool should my gun, pepper spray and impact weapon all fail—highly unlikely.  Many years ago, I took a one-day knife fighting course in which we used rubber knifes.  Every student would have died the “death of a thousand cuts” had they been real!

Mass shooters can be stopped by determined unarmed persons, either when their guns jam (as they often do with inexperienced shooters), they run out of ammo, or they have to reload. If the defender knows how to properly grab a pistol (revolver or semi-auto), it cannot fire the next round.  There is also a physical limit to how many guns and how much ammo one person can carry. By contrast, bladed weapons don’t usually break, they don’t run out of ammo, and they need not be reloaded.

Imagine trying to stop a determined attacker who has a bladed weapon in each hand and 8 more on his body. I don’t see how, unless you have a gun and he is farther away than 21 feet.  Pepper spray may slow him down and allow you to escape. However, criminals who are highly motivated, under the influence of drugs or alcohol, or mentally ill can attack right through both pepper spray and TASER defense.

Consider the Sandy Hook school shooter. Imagine he had been armed only with serious bladed weapons as described in the first paragraph. He might have had a harder time entering the school; perhaps he’d have had to smash his way in.  But a mad man could hide and wield 10 or more kukris, swords, hatchets, and other bladed weapons without a problem. While gunshots alerted others that an attack was underway, a bladed attack would have been less noisy, with only the screams of the victims.  The sight of limbs being severed and blood splattering would have caused pandemonium just as shooting did. True, it takes more time to kill with bladed weapons. But he would have not run out of ammo nor could anyone without a firearm have hoped to disarm him.

Despite the delineation of the “21-foot rule” by police officer Dennis Tueller in 1983, the media and public are still under the delusion that a bladed attacker should be reasoned with, shot with pepper spray or shot with a TASER, as if responding with a firearm is disproportional.  If “ignorance is bliss”, then these ignorant advocates of “non-lethal means” are hoping that God really does protect fools.

Some bladed weapons— notably Tanto knives and tactical tomahawks, can break through auto glass and cut through the steel doors of cars like a table knife cuts through hot butter.  Also, there are knives make out of hard nylon that can be sharpened and are not picked up by metal detectors. If you think you are safe in a “NO WEAPONS ALLOWED” building where every visitor has gone through a metal detector, think again.

Crime is caused by defects in morality and mindset, not by weapons—no more than pens cause libel. Murder has been with us since Cain killed Abel (Genesis 4.8).  Those who want to protect themselves and family members should be on guard against criminals and terrorists who utilize bladed weapons, not just firearms or clubs.

— Warren Lind is a retired licensed clinical social worker and former security officer who writes extensively about crime, survival, and self-defense.  He is a member of too many pro-2A organizations to list.