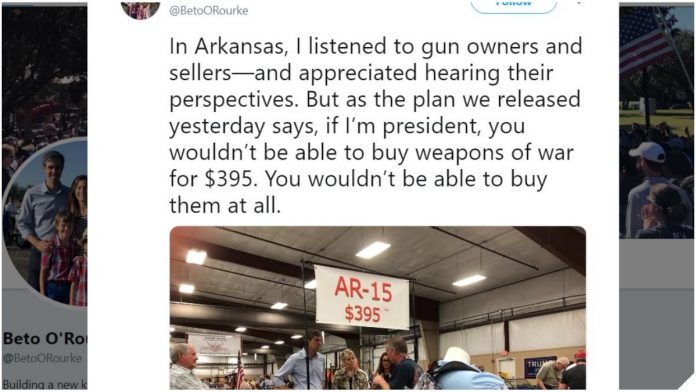 Robert “Beto” O’Rourke went to a gun show in the Deep South last week, just after announcing his plan to ration, ban and regulate firearms nationwide should he reach the Oval Office in 2020. (Screenshot via Twitter)

O’Rourke, a former El Paso City Council member and Congressman who declined to seek re-election in 2018 during a failed bid unseat U.S. Sen. Ted Cruz, R-Texas, debuted his plan while on the road in the perma-red Deep South. While stopping at a gun show in Arkansans immediately after, O’Rourke said he listed to gun owners and sellers and “appreciated hearing their perspectives.” However, posting an image on social media of himself under a sign advertising $395 AR-15s, said plainly, “if I’m president, you wouldn’t be able to buy weapons of war for $395. You wouldn’t be able to buy them at all.”

O’Rourke’s plan aims to reverse the current trend that “America is the only country in the world with more guns than people,” and would impose a ban on the manufacturing, sale, and possession of “military-style assault weapons and high-capacity magazines” as well as trigger cranks, silencers and bump stocks. There would be no grandfathering of newly-outlawed guns and devices with “mandatory buybacks” being funded through an unspecified increase in the current 10 to 11 percent excise tax on the firearms industry.

Those looking to purchase a firearm under would-be President O’Rourke’s plan would face universal background checks, national gun licensing requirements and be limited to one gun acquisition per month, which would have to be registered. Those who sell more than five guns in a year would have to become licensed dealers. With some exceptions, the minimum age for purchasing a firearm would be set at 21.

However, the number of guns available to purchase could be limited for even well-qualified and vetted buyers, as, according to O’Rourke’s platform, “all new handguns will be microstamped.” California has a similar requirement for new semi-auto handguns for the consumer market, which no current manufacturer says they can meet due to technical reasons, a sticking point which has brought that state into a series of prolonged lawsuits with firearms industry trade groups who argue it is a “slow-motion ban on handguns.”

Other bullet points from O’Rourke’s plan include declaring gun violence to be a public health emergency, establishing a federal red flag law, and moves to open social media platforms and internet hosting companies to a variety of lawsuits designed to block content. 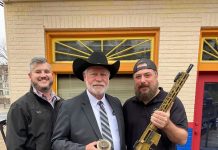