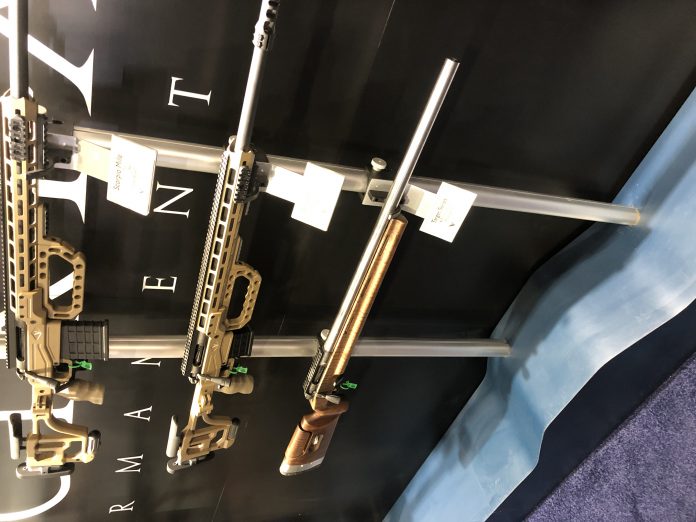 SHOT this year produced a surprising number of hidden gems when it comes to items of need and desire so, without further adieu, what were the ‘Best of SHOT Show?’

The Stoner 63 is a Vietnam era legend of the SEALs and 3/1 Marines. While it wasn’t widely used due to complexity and some issues with fire rate shift it did remain in service until the 80’s when the M249 phased it out of the LMG role. The 63, like the HK roller lock guns, is an exercise in 20th Century modular ingenuity. It has all the nostalgia points.

And Robinson Armament is bringing it back! Around 200 M96 rifles are set to be available around summer time and I believe these take the cake even from the expansion of the Brownells BRN-180 line up. Primarily because the M96 has the full classic layout where the BRN is a modern-retro take on the 180 this take it.

This win almost went to the Alien. But when I get into what I want out of a handgun every single day the Walther Q4 is the undisputed heavyweight champion.

While the Q5 is a race gun through and through the Q4 is shaping up to be the solid carry piece for the discerning shooter. People get wrapped around the issue of ‘weight’ in a carry gun and tend to dismiss all the positive aspects heavy frames when in reality these people need a better method to carry the gun. Good holster systems make the weight issue a non-issue, and mass makes these 9mm’s incredible to shoot. Combined with the legendary trigger held over from the PPQ and the Q4 is setting itself to be a premium EDC piece.

While we won’t see this commercial side until 2021 at the earliest, the MCX’s ‘Heavy’ iteration is an impressive machine. It is lightweight, fully ambidextrous, trim, and with all the modern accoutrements we could want.

The 13″ standard carbine barrel still produces an impressive effective range in their 6.8/.277 load the chassis will run 7.62 and 6.5 Creedmoor just as easily. Sig wants that NGSW win hard and this is looking well placed in that space. The rifle’s greatest subtle strength is the familiarity it breeds in the user who picks it up, if you’ve shot an M16 or M4 it feels like natural evolution on the tract. The other two submissions pay little mind to size/bulk and the bullpup seems to be relying heavily on barrel length.

The MCX exhibits the flexibility we’ve come to attribute to the AR-15 when it comes to size, but built around the new ammo from the ground up we can expect far more efficiency. The only unknown, since it’s the law of the universe, is the physics of a high pressure round and what we can expect from parts endurance.

Optics went in heavy for 2020 with the undisputed winner amongst a field of quality options being the Razor Gen III 1-10x. My review called it and I couldn’t find a contender to shake up the field.

Vortex set the new bar for what a general purpose rifle optic should be. End of story.

Holosun Optics played a full hand of products at SHOT, but their 507k, the updated controls on the 507/508, and the new 509 chasing the ACRO market were all we wanted in more out of dots. The gold reticle 512 and emerging DBAL format laser systems just rounded out a strong show.

A whole lot to love and run.

Cloud made a name with the OWL. The OWL is arguably the among best stand alone long gun lights on the market.

But the OWL doesn’t play nice with others. It didn’t work around other rail mounted end control devices or particularly well on any but a top rail orientation. It was as nearly indestructible and weather impervious as one could desire.

Cloud has introduced the REIN to fill that niche. The Rail Mounted Environmental Illumination light uses a far lower profile series of mounts, including M-LOK, to place it around systems like the MAWL or a DBAL/PEQ in an industry recognized pattern for controls. The incredible illuminative capabilities of the OWL are intact and the durability of the system remains true also. It’s good to see Cloud Defensive continuing to push, even after knocking in a huge win with the OWL.

No, not kidding. Beretta is a famous for its firearms, especially the incredible 92X in handgun circles, here in the U.S. firearm market but their product catalog is far more vast, and they own it.

Beretta has been struggling to let our discerning selves know that they have a whole lineup of jackets, pants, shirts, tactical and casual wear, and bags made to some of the finest specs imaginable. We all know the dead bird was the name but in the game and that 5.11 markets their pants off to keep marketing their pants but… holy saints of the ages Beretta has this enormous crate of gear to cover mild climate to extreme cold… and nobody knows!

They’re webpage tells the story, the first firearm product is listed… 3rd, after two apparel categories. Beretta doesn’t just want to be your carry gun, your field shotgun, or your precision rifle. They want to be the refined image of your outdoor lifestyle in any environment.

There you go! Click stuff! Go forth!, It’s the internet so have fun.