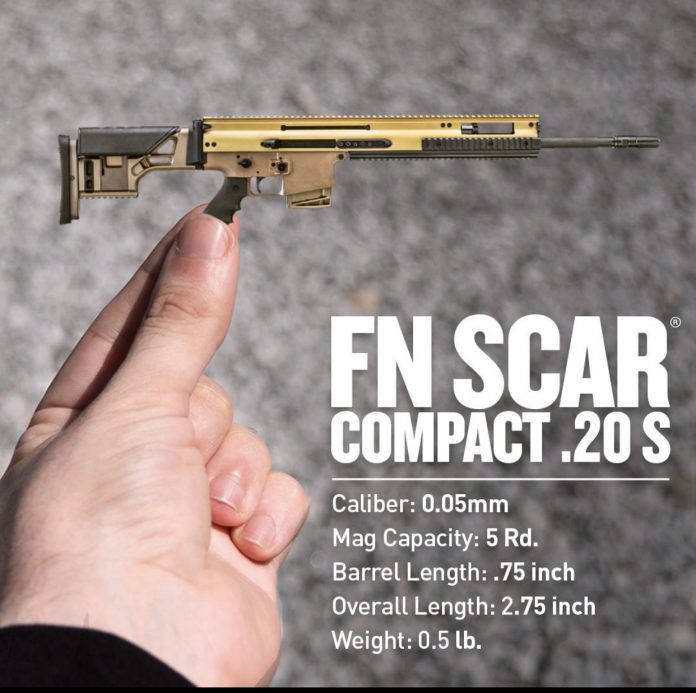 The First of April, April Fools, has been a fun day in the firearm industry for years, with gag releases coming from companies around the realm to tease the masses.

The cruelest of pranks was probably ‘In Stock’ posts.

IWI did the same with a swipe at the 5.45 gang. It is, perhaps, cruel and unusual punishment for social media machinations. But who knows, mostly things like this rest on production capacity and demand more than abject cruelty… that is firmly H&K’s purview…

Others took a more pragmatic prankster tact, like the FN Mini-SCAR20.

Say what you will about the Croatia imports or anything else surrounding Springfield’s catalog, that was well done.

Someone decided to give CTD some flak for their auto adjusting price model and whatever is on the end of that line (it might even be CTD, I haven’t checked… I’m afraid)

This tweet from Libertarian 2A Advocate Austin Peterson got by many a fact checker who didn’t bother to think about the date. Many a triggered tweeter who believed such things “shouldn’t be joked about” and to that I must advice, if you cannot laugh at yourself and at serious topics, you are too tightly wound to make progress well.

We must laugh people.

Modlite played it well by promising a suppressor, something that has been done with maglites actually, and it was nicely done in good fun.

However, the best of the day I saw. The most excellent of excellence. The masterpiece, if you will. That came from LAW Tactical.

They did it! China finally recognized the LAW patent and no more garbage tier copies with stolen footage will be advertised on Facebook for a fraction of the price!

Wouldn’t that be nice…

A well done April 1st everyone, back to work. Except for those on a Spring Break, enjoy.