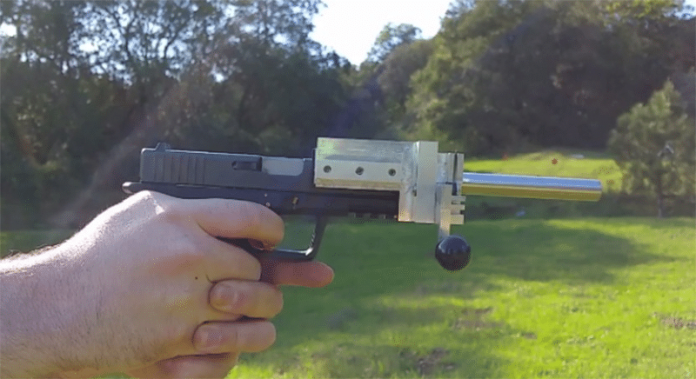 Marketed to those on the Best Coast who want to home build their own Glock style 9mm/.40S&W pistol from a kit, here is a bolt-action for the slide to keep it California-compliant. #nottheonion

The manually-operated Inlander $149 Easy Bolt and extended 9-inch barrel bring compliance to the game. The kit, when added to a “zero-shot” magazine that is not readily detachable (see = bullet button demise) gives you a bolt-action Glock.

This abomination is due to recent changes in state law while taking into account the deletion of the single-shot exemption allowance. As Glocks are not on the state’s increasingly constricting approved handgun roster, many in Cally are using 80 percent frame kits (Polymer80’s PF940C comes to mind) and trying to do the right thing.

A close up of the firing sequence:

Some “rapid-fire” (though, note, this is not CA-compliant, still too assaulty due to the detachable “large capacity magazine”):

And the nuts and bolts of the install for those who have stuck around this far: