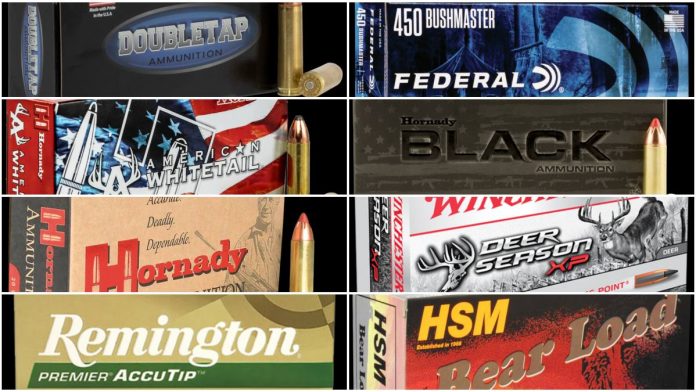 Evolving from a Jeff Cooper concept, the .450 Bushmaster has grown in popularity in the past decade, especially in areas where deer regs have made it a must-have.

Cooper, a legendary gun writer and shooting theorist, wrote about a gun he described as “The Thumper” in his 1998 book, “To Ride, Shoot Straight, and Speak the Truth.” The idea was something akin to an M1 Carbine chambered in a round like the .44 AutoMag but able to reach out to 250 yards. Fast forward a decade and, following lots of groundwork and burning of lean muscle tissue into the night, Tim LeGendre of LeMag Firearms, developed the “.45 Professional” as a big-bore AR round then moved the design to AR-maker Bushmaster– hence the slightly shorter resulting cartridge’s name– and Hornady took it to market in 2007.

At the time, Hornady described the round as “the hardest-hitting production cartridge ever to be chambered in an AR-15-style rifle.”

Approved by SAAMI, the .450 BM has the appeal of being just one upper change away from working on most AR platforms, although magazines can sometimes be tricky, leading some manufacturers to produce low-capacity (to meet the needs of hunting regs) mags specifically chambered in the rounds.

Speaking of hunting, that is where the .450 BM shines, with the round delivering about twice the energy of a .223 Rem, producing a roughly comparable performance to .458 SOCOM and .50 Beowulf. Where it beats the latter is the fact that it is classified in many states such as Michigan as an acceptable straight-walled cartridge for deer hunting in many previously shotgun-only areas.

Whereas initial ammo offerings were limited, today there is growing variety on the market from both household names and niche cartridge makers when it comes to .450BM

This had led Hornady to expand their own branded .450BM loads to include 245-grain Interlock American Whitetail and 250-grain Flex Tip Expanding in both their Hornady Custom and Hornady Black lines.

Other ammo makers have also jumped on the bandwagon as well, with Federal producing 300-grain jacketed soft point Power-Shok and 260-grain Fusion soft points among other loads. Remington, Winchester, Doubletap, and HSM have set up comparable real estate in the Bushmaster neighborhood.

Besides AR uppers, Ruger has introduced all-up modern sporting rifle models chambered in .450BM as part of their AR556 MPR series while ATI did the same thing in their Milsport platform.

For those looking for bolt guns or single-shots, either for personal preference or to comply with local regulations and rules, there are lots of options out there. Savage Arms has of late introduced a few different models of their Model 110 bolt-action platform factory chambered for .450BM. This includes the 110 Wolverine and 110 Engage Hunter XP. Chambered in the powerful 450 Bushmaster, this Ruger Gunsite Scout can take down most large game. This used rifle is in excellent condition in the Guns.com Vault for about $100 less than a new one.

Ruger’s Gunsite Scout rifle is lightweight, hitting the scales at 6.6-pounds. Coupled with the 16.1-inch barrel and it is a handy brush gun. The .450BM chambering, with a 4-round magazine, also gives the hunter a good bit of “thumper” on hand if needed.

The Ruger American Standard in 450BM carries a Go Wild pattern stock while the American Ranch runs an FDE synthetic. Both are available under $500.

For the more budget-conscious, Ruger also has a few other bolt gun offerings currently available in .450BM. These include the Ruger American Standard with a 22-inch barrel ($495) and the Ruger American Ranch which has a shorter 16.1-inch threaded barrel with an installed muzzle break ($422) on an 11/16″-24 pitch. Both feature lightweight synthetic stocks and Ruger’s Marksman Adjustable trigger that is user adjustable between 3 and 5 pounds.

On the wide list of caliber options for Ruger’s No. 1 is the .450BM

Ruger’s falling-block No. 1 Standard is robust and sturdy, often seen in safari and dangerous game calibers. The company also markets it in .450BM complete with a black laminated stock. The Cold 20-inch hammer-forged stainless steel barrel has 5R Rifling and yields a compact rifle that is just 36.5-inches overall. While retail is $1899, our price is a good deal less than that.

All in all, these days, it looks a lot like the .450 Bushmaster is alive and doing just fine. 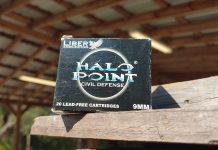