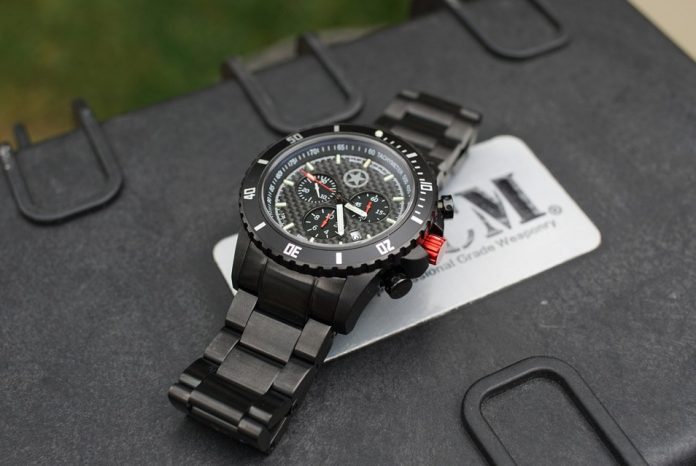 BCM (Bravo Company Manufacturing for you fuckers living under a rock) is most notably known for their firearms, knives and accessories, so I was a tad skeptical about their foray into watches. When companies branch off their mainline focus, they tend to produce a product that is often functional but doesn’t do the company justice. This was not the case with the BCM Mk15 watch. I tested this product on patrol as a Deputy Sheriff in every condition thinkable (minus sub zero temperatures as it has received after this fuckery of a winter). 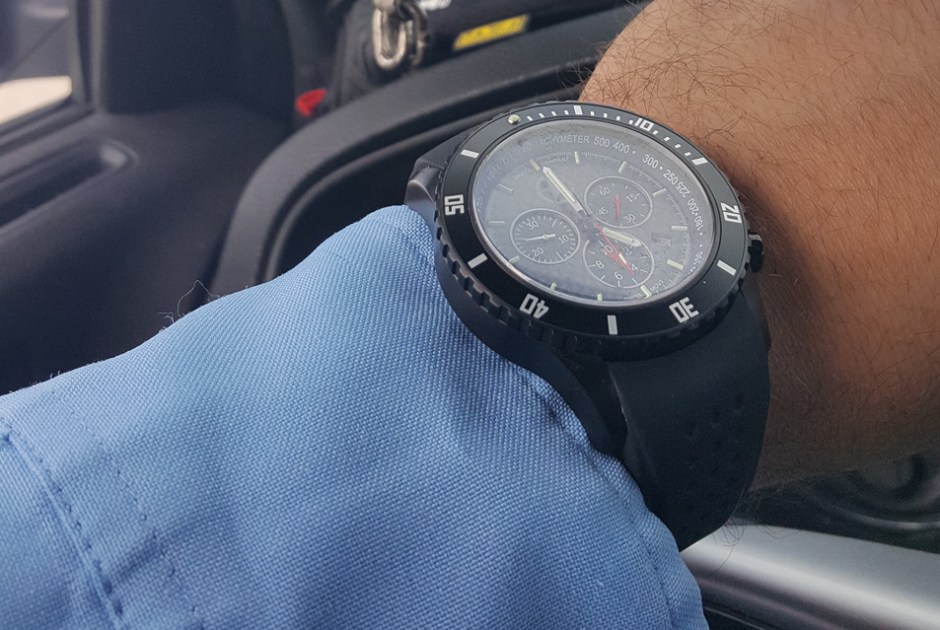 When I first received this watch I was immediately impressed by the tacti-cool factor of the case alone. This Pelican-style case screams badassery, which is consistent with the products produced by BCM. It feels rugged enough to endure mortar fire or a goddamn nuclear apocalypse. The case includes snap latches, appears to be waterproof, is made of injection-molded glass fiber and marked with a handwritten, distinct serial number on the underside (mine was 428). This was a production run of only 2500, with each watch having its own unique production number.

Upon opening the case you’re greeted by custom foam inserts holding the watch, tool for switching out the bands, a rubber diver’s band, a steel band, a glass vial with additional pins, and an instruction booklet. Each accessory has its own spot in the case. 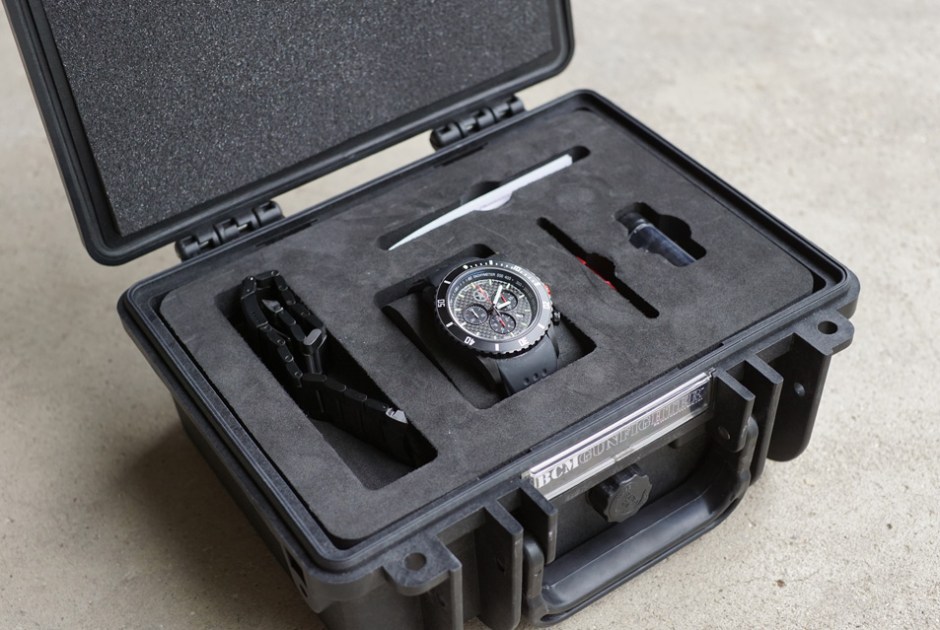 The watch itself is made of brushed stainless steel with a scratch-resistant sapphire crystal face. The face has a double anti-reflective coating, which I can personally attest to. On patrol I’ve had various watches that throw a significant glare from the face, which is like a fucking gnat at a barbecue: annoying and persistent (kinda like herpes, not speaking from personal experience of course). But from the slightest bit of sun to a pounding 95-degree day with no cloud cover, I can’t recall ever getting a glare off the watch. For some it may not be a big deal, but this is an important factor for me with watches.

Each hour mark is green in color, inlaid with tritium. The minute and hour hands are also equipped with the green tritium, and the twelve-hour mark is a red tritium which makes the watch very easy to read in the dark. The watch is brushed black in color and accented by the crimson red crown. The crown screws out to function, unlike some watches that simply pull out.

Because I suffer from partial brain lapses from time to time, it took me a minute to figure this out. The face is encompassed by a ratcheted bezel. It has three additional faces within the main face including a second counter, minute counter (up to thirty min), 1/10 second counter (which will transition to up to a ten hour counter), and a date counter. Its chronograph system allows you to utilize accumulated times as well as interval timing. Unless you’re completely retarded, the simple instructions will guide you through this so I won’t waste time explaining that to you. If you can read at a 2nd grader’s level you’ll be just fine, if not then I don’t know how to help your sorry ass.

Aesthetically this watch is fucking cool. Co-workers and shitbag suspects alike asked what kind of watch this was, who made it, if it could shoot fucking laser beams, etc. As with all BCM products its aesthetics do not disappoint. As stated before, the watch comes with two bands, a rubber diver’s band and steel linked band. For daily use I opted for the rubber diver’s band, primarily for comfort and the weight difference. The steel linked band looks great, but isn’t practical for my job. Unless they’ve been dropped on their head as a child, anyone would know that using the steel band in tactical conditions is a bad fucking idea.

That aside, switching out the bands is relatively easy with the spring set screws and included tool for doing so. I beat the hell out of this thing; the test watch seen here has been through torrential downpours, dropped in gravel in the prone routinely, exposed to copious amounts of sweat, Copenhagen, gunpowder and hate. The watch held true throughout. 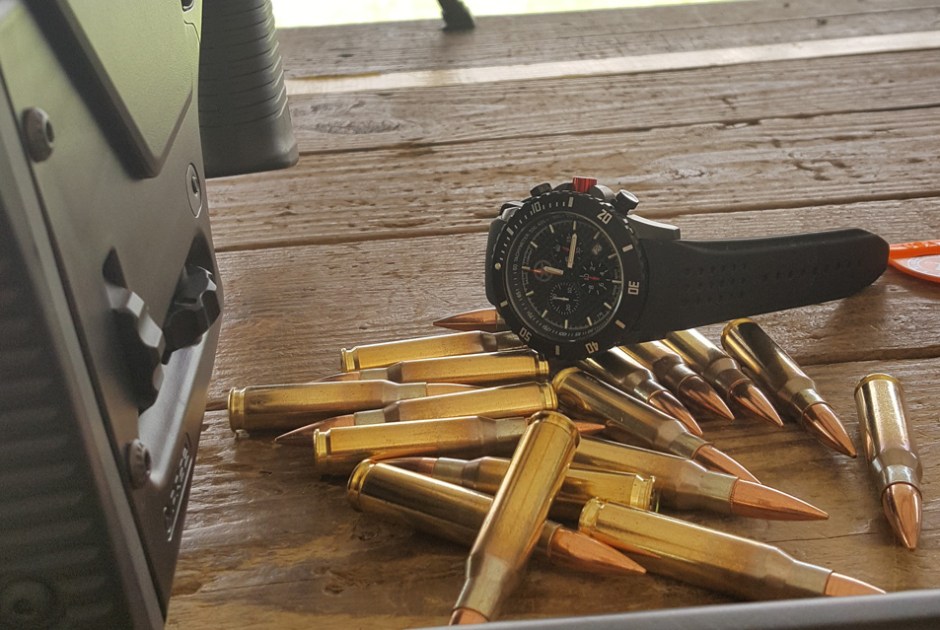 Overall the watch is rugged and lives up to the BCM name. I was truly impressed with the quality and effort put into the manufacture and design of this watch. For the day to day function of a rugged timepiece this is an excellent choice. At roughly $600.00 this watch is reasonable for what it offers. However, I will say that the lack of a compass is a downside. For LE the compass function on my typical watch carried has proved vital in many situations. It is a small thing that many don’t think of until it’s needed. One other thing that I was concerned with was the tritium markers at night. They’re noticeable but subtle enough to not give away your position. Just food for thought in practical application. 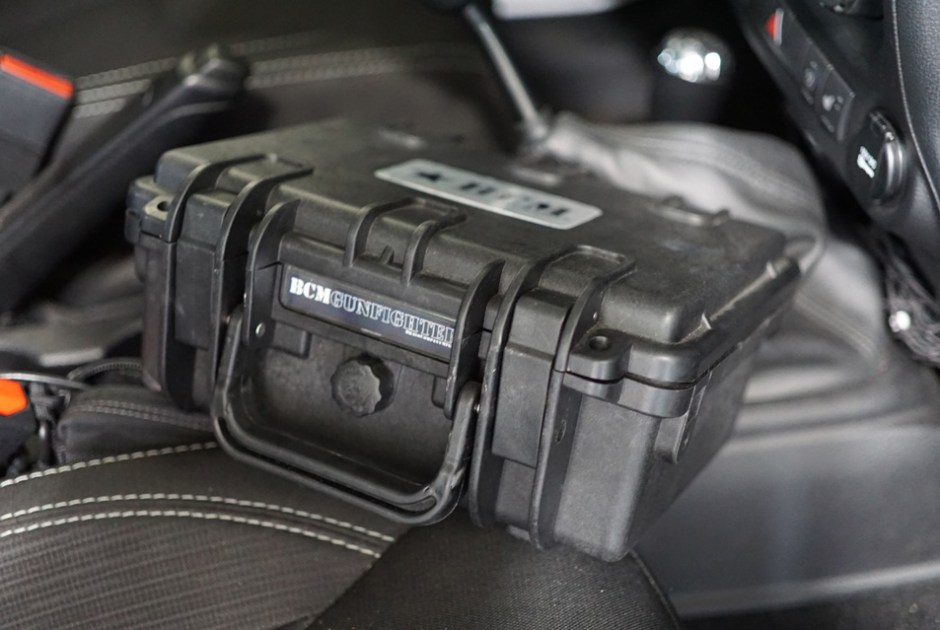 [A note from Tim – I have purchased a clip-on compass for this guy…. fucking youngsters…]