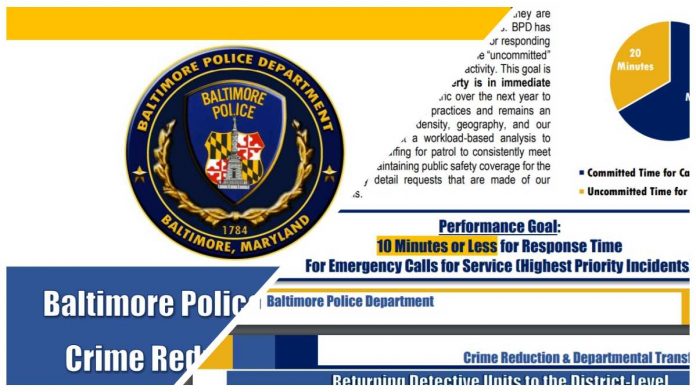 The newly established benchmark for BPD to respond to “emergency calls for service” is set at 10 minutes. “This goal is for the highest priority calls where life or property is in immediate danger,” says the report, noting that the metric will be evaluated over the next year.

“The importance of that goal is that the department has not in the past set a response time goal,” said Harrison in the press conference. “Now, we get to emergency responses– people with lives in danger, crimes in progress and perpetrators still on the scene — we get to those extremely fast, but now we have a written goal that we can work to achieve and then make sure we improve on that goal.”

According to the agency, BPD is the eighth largest municipal police force in the country and is staffed by some 3,000 personnel. The Department’s jurisdiction covers Maryland’s largest city, with a population of over 600,000. According to the Baltimore Sun, the city has suffered 185 homicides so far in 2019. In 2018, the number of murders in the city, 342, outpaced other urban centers such as Detroit and Chicago.

Harrison recently joined the agency after a 23-year career with the New Orleans Police Department, becoming Baltimore’s fifth commissioner since 2012.

The new initiative may take a minute to turn the city around, as the new chief describes it as a five-year plan.