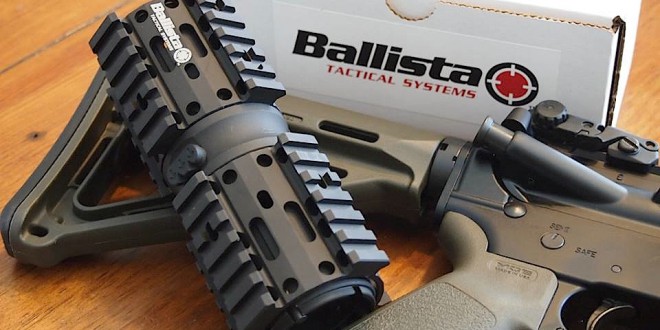 The other day we received a package from Ballista Tactical Systems (BTS). BTS makes an incredibly unique rail system unlike anything I have ever seen. They have developed the Nautilus Rotating Rail (NRR) which is a rotating quad Picatinny rail system.

The NRR allows a user to replace the 7 inch plastic hand guards standard on most carbine and full length AR-15’s with a rotating quad rail. What makes the NRR unique is the quad rails are separated into 2 independent groups of rails that independently rotate a full 360 degrees with indexing points at each 45 degree angle.

This rotating system allows you to move gear in and out of line of sight on your system without having to attach or remove items from your rail. While some might see this as a solution to a problem that does not exist, lets examine the possibilities of what this can do for you.

As you can see there is a limitless amount of  configurations that could actually be valuable. On duty pistols where left and right hand users will be sharing a patrol rifle, the NRR could be a large value add.

The Nautical Rotating Rail is made from aircraft grade 6061 T6 5011 hard-anodized aluminum and made entirely here in the USA. It has been extensively tested for strength and reliability here is just a few of the tests it has gone through and passed.

There is always a draw back to new technology. While minor these are the items we found that could be an issue to some users.

Other then those issues we found during our testing this is a really well made product.  This is just the highlights of what we really liked about it.

The NRR is the type of gear that can be the gateway to an overloading of gear on your rifle. However if you are smart about what you put on your gun and limit the add-ons to only items that you are likely to use you will find the Nautilus Rotating Rail is the easiest way to fit your gun to perform in multiple types of encounters.

The retail price on this rail is listed at 439.00 with a lifetime guarantee. For a limited time they are selling these for the price of 199.00 with a risk free 30 day money back guarantee to try it for yourself.

Check out the full website to learn more and order yours.