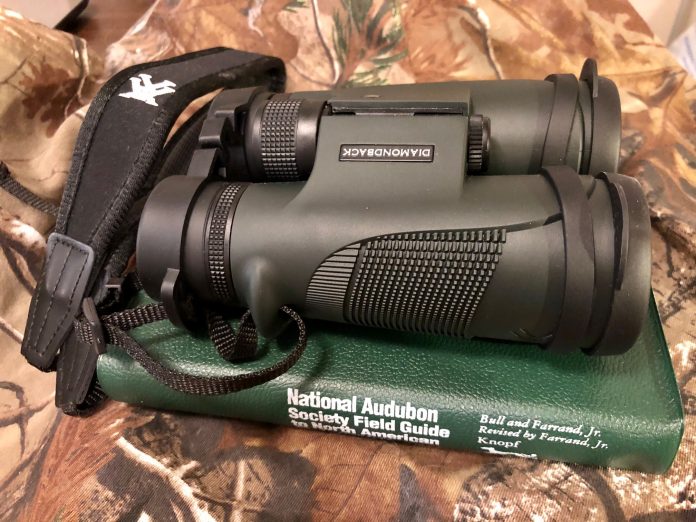 Like many people during 2020 I had to find activities to occupy myself while not actually leaving home. I’ve shared my near obsession with pandemic gardening already but I haven’t yet told you about my baby-steps in bird-watching.

Right now that’s all I would call myself – a small time bird-watcher. It takes a whole other level of commitment to be called a “Birder”. There IS a difference. You can read about that here if you care to.

When I was a kid, my dad was a bit of an amateur naturalist. He could talk your ear off about all different kinds of game wildlife and their habitats. But he also enjoyed studying songbirds. Much to my mother’s consternation, Dad would scatter birdseed directly onto the porch in the winter so he could see the birds clearly and photograph them through the family room windows.

I have childhood memories of Dad describing the calls of various birds to me – the Towhee (Drink-your-Teeeeeeea), the Chickadee (Chick-a-bzzz-bzzz-bzzz), and the Brown Thrasher (Says it Twice – Says it Twice) among others. In addition he drilled into me how to identify a few on sight – the Black-capped Chickadee, the Slate Junco, the Tufted Titmouse etc in addition to the standard Robins,  Blue Jays, and Cardinals.

Most of that faded from memory over the years – as childhood things tend to do – and Dad has been gone for almost fourteen years now. But events this year have brought a lot of my dad back to me.

Before this pandemic lockdown year I had not paid much attention to the birds in my backyard. I was busy raising children, going back to school, starting a medical practice – running here and there and everywhere. While I “accomplished” many things, spending any significant time just sitting quietly my own yard was not one of them.

That all changed in 2020, and I’m so happy that it did. I created a patio space. I built my own picnic table and “park” benches. I planted a pandemic garden. But a side-effect of these efforts was that I spent a great deal of time outside, often just sitting reading a book in the evenings.

That quiet sitting allowed me to notice how much bird activity there was in my own yard and the surrounding neighborhood trees and shrubs. So I re-stocked an old feeder that had been empty for at least a decade, and watched to see what would happen.

The adage “build it and they will come” certainly rang true. I’ve learned so much about birds in a very short period of time – thanks to online sources such as The Cornell Lab of Ornithology and their Merlin App.

I can now recognize the calls of birds such as the Carolina Wren, the Goldfinch, and even the Red Bellied Woodpecker. I now know that the beak of the lowly Starling changes color through the seasons.

Before this year I didn’t know that woodpeckers made any noise at all except the jackhammering sound when they were drilling trees. That is until I heard one happily “yakking” his call while munching at my feeder this summer. It’s all been quite fascinating, yet soothing at the same time.

I even imagined that the Cardinal who regularly came to inspect my garden in the early evenings was sent by my dad to check up on me. I know that’s probably silly, but a year like this will do those things to you.

I don’t even want to think about how much money I’ve spent on bird seed this year. I even switched over to pre-formed blocks in cages – which are more expensive than bulk seed in bags – because the deer figured out how to upend the tube feeder and eat whatever fell out. Those hooved parasites emptied the whole durn feeder every single night until I finally got wise.

I eventually started supplementing the commercial seed blocks by making some of my own little feed cups out of peanut butter, old cornmeal, and the seeds from my butternut squashes. I got the idea from the Audubon Society, and this uses up squash seeds that I wouldn’t otherwise eat, but hate to waste.

Honestly, despite my complaints to the contrary, all of this was still way cheaper than an actual vacation, so that’s how I rationalized the expense. It also allowed me to rationalize an additional expense – I sprang for a new set of binoculars.

The feeder is only about 25 yards from the patio and the back slider, but my distance vision isn’t what it used to be. Clearly identifying beaks and color patterns required me to have some magnification. I started using a cheapo pair of binoculars that I originally bought for a cruise years ago, but soon realized that although these were fine for 30 yards or so, they were wholly inadequate for properly picking out the birds I was hearing in the neighbor’s treetops. So I started doing some online research.

It quickly became apparent that buying binoculars was a lot like buying a rifle scope. Just as with buying firearm optics, with binoculars you usually get what your pay for. Really hardcore Birders – just like hardcore shooters – can easily plunk down thousands of dollars for their glass.

I was not prepared to make that kind of investment right off the bat, so I looked for something more entry-to-mid-level. I was able to rationalize the cost  with the thought that I could also ultimately use the binoculars in a deer stand and for squirrel hunting as well.

Still, with this year’s financial outlook being a bit unpredictable, I had to be brutally honest with myself and weigh what I thought I “wanted” to use them for vs what I knew I was “realistically” going to use them for. That gave me a price range to work with.

I am not anyone’s definition of hardcore anything, so I found what I consider to be a pretty decent set of binos for just about 300 dollars. I settled on the Vortex Diamondback 10×42 Waterproof model. I went waterproof and fogproof because even though things are fairly comfortable in my backyard, I know what the weather is often like up on the family property.

I went with Vortex because I have a Vortex rifle scope which served me well on my Texas hunt last year. Thus I had at least a little prior experience with the company.

Vortex had several models of binoculars to choose from – all of which were consistently rated high on “top binocular choice lists” I found online. The next step up from my Diamondback – the Viper HD – was about $600, and the Razor HD was over a Grand.

The Diamondback gave me what I needed without feeling that I was buying Kobe beef for a hamburger palate. At least for now.

Since making my purchase in the late summer, I’ve been very pleased. I can peruse the treetops in the summer as well as enjoy the feeder activity from the comfort of my kitchen in the winter. After the holidays I’ll take these binoculars out to the property to see what I can make of the local squirrel population, too. Now, I need a longer zoom for my phone camera.

So if you are despairing of what you are going to do with yourself this winter after the holidays are all cleaned up, don’t overlook the wildlife that is right under your nose in your own yard. It’s never too late to buy a bird feeder and download a bird app. Or maybe even invest in some binoculars. You may discover a whole new obsession!