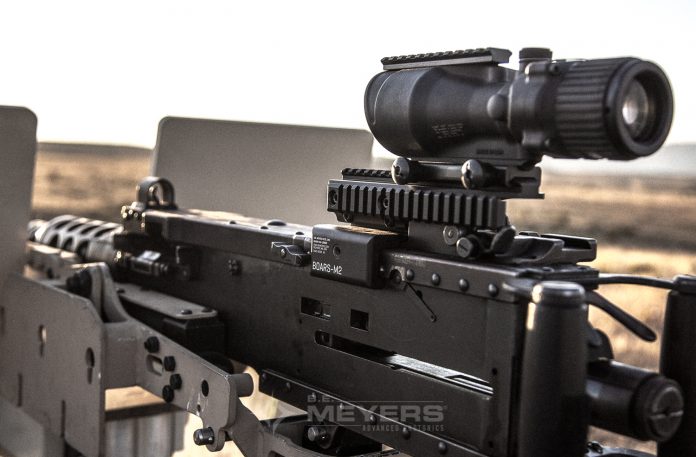 Let’s have a blast from the past and go back to 2008. Imagine you’re in the gunners seat for your Platoon Leader (PL) on a night patrol in Afghanistan. Your equipment list is as follows. M2HB Machine Gun, ELCAN thermal, M145 MGO, and GI optic mount. Now imagine during pre-checks while the convoy is set up and ready to roll you find out that your optic mount doesn’t fit on the receiver of your M2. Force won’t seat it due to thick rounded rivets on the receiver. So what do you do? You don’t have tools, you don’t have repairman or mechanics on hand, but by God you have a hacksaw.

No B.S. This is a true story. The soldier took a hacksaw to a .50cal machine gun to file down rivets enabling his optics to mount on his .50cal right before a patrol.

That was 2008, it is now 2021 and we are still running this same Government Issued Machine Gun Optic Mount. The Military deserves better. We have the machines to do it, we have the brains to engineer a better product, why are skimping on the safety of those who protect us?

B.E. Meyers is a company that has had generations of prior military folk working hard to give us products that are made strong and built smart. They see the issues that our guys are facing and work to improve them. That is why we have the MAWL, or the target marking IZLID.

Now, we have the BOARS-M2 Optic and Accessory Rail System. A low profile mounting system that allows your optic to quickly disconnect from the gun yet return directly back to zero once remounted. The mount clears a gunners shield and without being removed still allows view of both rear and front iron sight in case the optic goes down.

The Issues with the Mil Mount

The current Government Issued (GI) mount is meant to mount an optic directly to the weapon system. While that design got our military through many combat zones it is now showing severe design flaws. The overall idea of directly mounting an optic to a heavy recoil machine gun in harsh environment isn’t a good one. The moment that optic goes down, needs to be switched out for the mission at hand, or simply brought into your hooch for safekeeping for the night, is the moment that that mount needs to be moved. It is no longer a quick optic change, it is now a whole mount change. Zero is lost.

HERE is a mount that is similar to the GI mount for reference.

The GI mount features small hex screws. Due to these screws not being captured screws, if loosened too much they can fall out and be lost. Let’s go back to that night patrol story. In the night those screws come loose or the mount needs to be removed, fumbling with gloves on in the dark, kiss those screws goodbye. Those same hex screws also dig into the receiver over time due to consistently being tightened to different specs. The more that those screws dig into the receiver the more that the reciever gets wallowed out creating holes. Those holes no longer allow proper tightening of the mount. Zero is not sustained.

The largest flaw that can be seen directly involves the design on the M2 .50cal Machine Gun. This issue has been seen in Guard units, active duty units, small special units, etc. Much of the M2 is put together using rivets. Just like anything, (except the GI optic mount I guess) the M2 has gone through updates and upgrades. Due to these upgrades, such as upgrading to the M2A1 fixed headspace MG, the receivers have been completely rebuilt. During this rebuild there have been different types of rivets being used. Some flat and thinner, and some rounded and thick. The random draw of rounded and thick riveted receiver is a severely unlucky one due to now the GI mount not wanting to slide over the top of the receiver. So what do we do? Back to the story…we hacksaw. That mount is now mated to that receiver. Will it be marked to that gun? Probably not. It will go back into a cage with all of the other “universal mounts”. Until the next operator grabs that M2 and does it all over again with another mount. The cycle continues.

Additionally, if a M2 is found with the incorrect rivets installed it will need to be returned to depot level maintenance for overhaul. This means that you are down a gun for awhile.

The current GI mount also does not allow the operator to see the iron sights of the gun while mounted. This adds additional time to engagement of a target if the optic goes down. The current mount, while mounted, additionally doesn’t allow the user to remove the backplate of the gun. If maintenance, malfunction remedies, anything of the sort is needed, that mount now needs to come off, zero is lost.

The B.E. Meyers BOARS-M2 is a two part mounting system allowing the user to keep one piece of the mount attached to the system indefinitely and remove the second piece of the system to the optic for quick removal (throw lever mount) yet not losing zero. This means that the operator can quickly change/remove optics. Whether it is removal for maintenance, accountability, throwing your $20,000 optic in your backpack to run into the chow hall to grab a burrito, this mount allows you to reestablish zero the moment the zeroed optic is attached to the primary mounting piece. A truly modular system.

The BOARS features the lowest profile machine gun mounting system on the market being only 3.22″ in height. Allowing the user to be fully behind cover during operation and enabling the user to have a weapon system that truly allows them to have eyeball defilade exposure.

The decisions of the materials used for the mount ensure that no parts of the mount are lost during assembly/mounting and more importantly, that no part of the host weapon is damaged. The hex screws used within the mount are captured ensuring that they do not get lost after loosening. The base of the mount, the part that directly mounts to the weapon, uses friction to stay clamped. This is done using brass paws. Brass is a softer type of material ensuring that the paws do not damage the receiver of the gun.

As far as the materials used and the harsh environment that these mounts will be deployed in, the mount is made with 7075-T6 aluminum allowing it to withstand bangs and bruises that these operators will put it through. The mount uses non-corrosive anodizing ensuring that rust will not be an issue.

The BOARS has been tested on M2’s dating all the way back to 1932. Testing in various units such ranger battalions, national guard units, etc. It has also been mounted with optics ranging from the PAS-13 Thermal Weapon Sight and Aimpoint FCS 12 on a Carl Gustav.

Where is it in our Military Presently?

From the writer..Well presently, there are 4,500 BOARS fielded but we don’t know where exactly they are. For all we know they could be sitting on a shelf in a warehouse somewhere. During my time in the Army, and now asking around to other units, I have not seen one mentioning of the BOARS and still see Soldiers struggling with their 1970 designed GI mount. The Army is failing our Soldiers. We are wasting our funds at the end of the FY just to spend them, meanwhile, those funds could go to literal life and time saving equipment.

But what they don’t know they can’t change right? Knowledge is power. Here is the news post talking bout the BOARS being chosen for the U.S. Army Soldier Enhancement Program. “Units are encouraged to contact PM-Soldier Weapons, PEO Soldier, Picatinny Arsenal, NJ to place their demands for initial fielding.”-BE Meyers

Where this program is now? No idea.

Don’t be afraid to speak up about the latest and greatest equipment. Oftentimes, it is great for a reason. Less oftentimes, it has a NSN..easy purchase.

For other purchasing options click HERE for how to purchase using Direct, GSA, DLA, and TLS procurement.