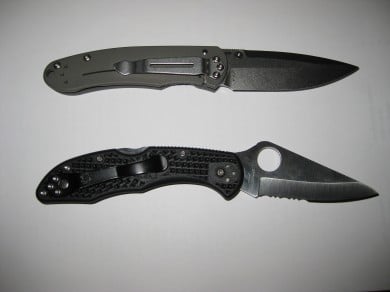 YouTube and forums are constantly pushing information to people in huge waves. Over time, however, a lot of this information becomes group think, and that can be both bad and good. Consensus tells us that the Sebenza is an awesome knife and consensus, in that case, is dead on. But consensus also makes a big deal out of things that don’t really matter. Personal preference reigns supreme but sometimes, the Internet makes a mountain out of a mole hill. I know…shocking, right? Here are five principles of gear group think that are total bunk.

Tip Up or Tip Down

Most knife knuts talk about the orientation of the pocket clip in terms of how it positions the knife blade closed and in the pocket. Is the clip “tip up” or “tip down”?

In all the years that I have owned, carried, and used pocket knives, this distinction has never once made a difference, with one major exception–waved knives (which won’t wave open if the clip is tip down). For EDC tasks, tip up or tip down makes no difference whatsoever. I have carried a knife since I was ten. I have had a knife with a pocket clip since I was senior in high school (I am now 36) and not once, not one single time did it make a difference.

Gear folks are opinionated and picky people to begin with, so preferences morph into dogma and here this dogma is complete bunk. Whatever works best for you or for the knife is what you should do. Never use this as a criteria to eliminate a knife you’d otherwise like. In practice it will never make a difference, with the Emerson exception noted.

Are you on a search and rescue team? Are you a police officer or a firefighter? If not, then there are no real reasons you need more than 300-400 lumens in a flashlight. Even in those jobs the kilolumen cannons are silly and impractical. But in an EDC light, a 1,000 lumens is actually a bad thing.

You could accidentally stumble on it when you turn on your light and blow your vision or wake up your spouse in the middle of the night. It serves no practical purpose, and relying on your light to blind an attacker is a tactic only Mall Ninjas bank on (plus with way human eyes perceive lumens, 400 lumens is more than enough to temporarily blind someone).

I have a couple lights with kilolumen outputs, but I use them almost exclusively in lower modes and when I do punch up the lumens it is always, always for fun. There are legitimate applications for those lights, but EDC and normal use is not one of them.

Blade coatings suck. Okay, Ceracote, and similar products are good, but the DLC/PVD/TitaniumCarboNitrite stuff is all junk. Let’s be clear–its paint. It might be adhered to the surface differently but it is still just paint. Its marketed to us as being tactical or a way to reduce friction, and those things may have infinitesimally small grains of truth to them, but the real purpose is to cover up imperfections in the blade steel.

Have you ever peeled back the coatings to see what’s underneath? I have and I have been shocked at just how shoddy some of the steel is underneath. Blade coatings are the knife equivalent of beer goggles.

And this says nothing about how they wear which is, frankly, terribly. You’d never ever accept the level of performance you get on blade coatings on, say, your car. If after a single use your car’s paint was streaking and falling off, you’d sue the car dealer or take your car back, but for some reason knife folks just accept that blade coatings are supposed to look terrible after the first use. You can call it the Boba Fett effect, but the reality is, its just proof that blade coatings, except for a few, are terrible things to put on steel. And really, if you care enough about knives to spend more than $100 don’t you want to see the grind lines? Don’t you want to see a beautiful stonewash or a mirror finish?

If you read reviews of the Benchmade Mini Griptillian you will see a steady refrain of “cheap feeling handles”. They feel hollow (because…wait for it…they are). They don’t feel secure. They feel plasticky. Let’s be clear here, plastic is a material that has a broad definition, and that definition includes both G10 and FRN.

If done well FRN can be just as grippy as G10, it can be lighter, cheaper, and just as colorful. Sure, G10 doesn’t have that plasticky ping to it when you flick it, but really, this is a knife not a tuning fork. Some of my favorite knives have FRN handles–the Mini Grip, the Dragonfly II, and the Cold Steel Mini Tuff Lite. Calling G10 classy or upscale is only true if you know nothing about knife handle materials. Give me some smooth bone, stag handles, tumbled titanium, or micarta. There’s lots of stuff better than G10 and I am pretty certain FRN is one of those materials.

Okay, so this one is not as big a hoax as the others–denier weight (a measurement of how much fabric weighs). The vast, vast majority of packs out there have material that is sufficiently strong for almost all uses. The idea that in order to be tactical or hard use you need something that weighs a ton and feels like sandpaper is just bonkers. Really great materials, like Dyneema, are super strong and light. I’d never recommend something like an ultralight backpack for rough and tumble use (urban or rural), but high denier weight stuff is a proposition of truly diminishing returns. Its just not worth all the extras–money and weight. I have never had a problem with my Maxpedition Pygmy Falcon II and even then I feel like I could cut some weight and some comfort and still be fine. Doubling up the fabric, like some high end pack companies do, is really just a waste.

The crowds in the gear world are certainly wiser than most, but even among our fellow well-equipped travelers there are a few blinds spots. These are the five I think are the silliest, but there are others. We spend a lot of time and money on our gear and we want perfect stuff, but sometimes things just don’t matter all that much.

Via:: Avoiding Groupthink: Five Things that Don’t Matter About Gear