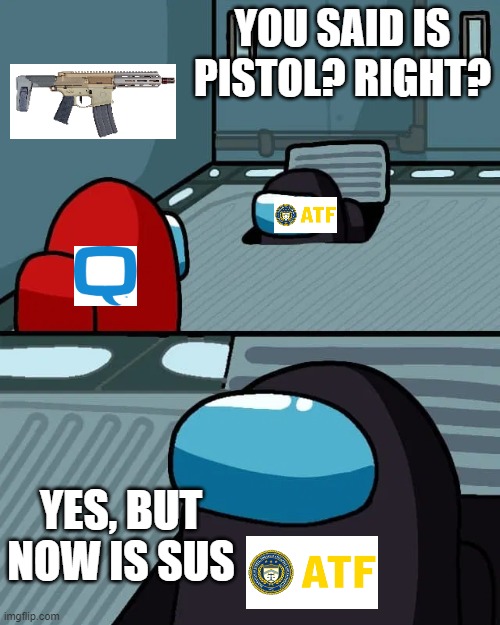 ATF’s tech branch is known to change their minds. The bumpstock is probably the most famous reversal, but in the grand scheme was a lower impact event.

The implications of that reversal were not low impact and here we see that result.

Basically, Q got told that the Honey Badger Pistol is a Short Barreled Rifle, even though it has a brace and was built as a pistol. There are rifle and SBR variants but the pistol has been declared an SBR. Every single Honey Badger Pistol is now an illegally transferred NFA item that did not make it onto any ATF Form 1, 2, 3, or 4’s for proper transfer and none of the NFA taxes were paid. A single NFA violation can result in a $250,000 fine and 10 years in prison.

Additionally, Q has been directed to send samples of the Mini Fix and Sugar Weasel to the ATF for classification… It is that last one that becomes the most problematic. The Honey Badger has enough proprietary features that it could still be isolated, technically, from other pistols and the Mini Fix does too. Both of those firearms with legal pistol definitions (up until now) are different enough that the ATF might now be able to apply the ruling to anything outside that specific Q Model.

But, the Sugar Weasel Pistol, is an AR Pistol.

All the pretense at being a proprietary product is gone and any technical protections that would offer to the rest of the braced pistol market go with it. I do not know if the ATF would need to systematically drop C&D’s to every major and minor manufacturer but it seems like they selected a smaller company for a reason. Springfield Armory probably has the bank to protect the SAINT pistol(s).

The Honey Badger was close enough to be more than worrisome (beyond the fact SBRs shouldn’t be a problem in the first place) but if the Q Sugar Weasel gets declared an SBR every single AR pistol is in the crosshairs for C&D and retroactive NFA registration.

Anyone who owns a Honey Badger is in standby right now, waiting on the ATF to tell Q what to do.

There have been rumors that braces were in the crosshairs (again) and now we see the opening salvo from a manufacturing perspective.

Bumpstocks may have been a gimmick, that shouldn’t have mattered to their defense because now braced pistols, a highly popular firearm type, are in trouble too.

What should you do if you own a Honey Badger Pistol?

Failure to do so creates a violation of the NFA.

Contacting the DoJ (above link) and the White House, letting it be known that the targeting of a firearms company and the mass reclassification of legal firearms for no beneficial reason is a capricious act that will only anger and harm millions of lawful firearm owners while doing nothing to curb homicides, suicides, or terroristic violence.