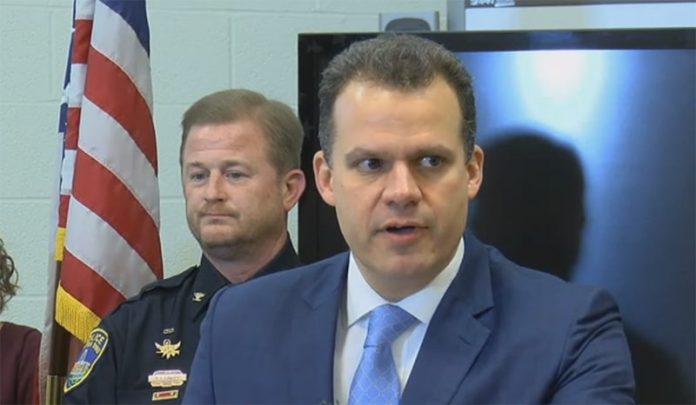 Watch the video on the link below.

Federal law enforcement officials announced the indictments of 11 Ohio residents last week for firearms trafficking, including the illegal transfer of a machine gun.

Kyle Walton, Assistant Special Agent in Charge of the ATF Columbus Division — accompanied by the FBI, the U.S. Attorney’s Office of the Northern District of Ohio and the Canton Police Department — announced the charges Thursday during a news conference in Canton.

“Taking these guns off the street makes the community safer for all of us,” Walton said.

Bowers also sold heroin during the same time frame and carries previous convictions of aggravated assault, cocaine trafficking, domestic violence, escape and other crimes, according to the indictment.

Gulley, Clark and Lorenz face trafficking charges for the transfer of a Heckler and Koch 308-caliber machine gun in July. Investigators found the machine gun, a sawed-off shot gun, six other firearms and ammunition in Gulley’s possession, despite his disqualifying felony convictions for assault and cocaine.

“Cases like these are exercises in homicide prevention,” U.S. Attorney Justin E. Herdman said Friday. “These defendants have no business carrying firearms, given their previous criminal conduct. This operation has made Canton safer.”

“The value of these types of cases can be measured in human lives,” he said. “These cases involve illegally possessed firearms in the hands of criminal. They demonstrate the cooperation that exists between the Canton Police Department and our federal law enforcement partners.”

Lawver said the seized guns have no connections to other crimes.