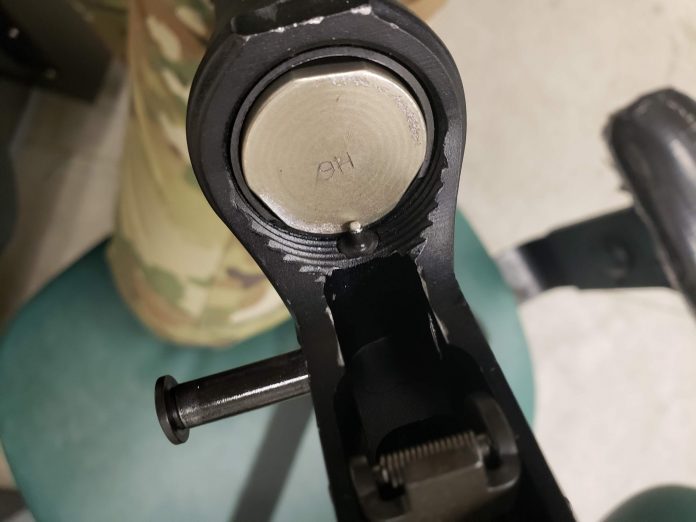 Short Answer: You more than likely have a burr on the back of your bolt carrier.

Within the function of the AR-15 the back of the bolt carrier is consistently hitting the buffer each time that the firearm cycles. When a burr is present on the back of the Bolt Carrier Group (BCG), which is normal considering it is a high friction point, this burr will create a pitted look on the buffer. The burr will do this no matter if it is so small that the eye can’t see it or if it is large enough that a swipe with the finger can easily find it.

Why are the Burrs In a Circle Pattern?

Every time that the firearm cycles the buffer will often rotate inside the gun. The burr on the carrier will stay in the same spot, however the buffer will rotate causing the wear to be on different parts of the buffer.

Is it the Buffer Retaining Pin?

The carrier has a slot that the retaining pin goes through each time the carrier pushes back into the buffer tube. The pin is there to retain the buffer and spring during disassembly and that is it. Hell, some dudes even run their guns without buffer retaining pins and they haven’t had one issue.

“When all the systems in an AR function properly, one could argue that a reinforced buffer retainer isn’t necessary.  We agree, except mix and match parts from different manufacturers and their varying adherence to TDP specs, tolerance stacking is far from the exception.  Many of us have had this inexpensive part break and toss its tip into the lower receiver, usually in the trigger group and cause a jam.  RBF’s billet construction and reinforced tip aim to mitigate this, it could be viewed as cheap insurance, even if the way we make it is anything but cheap.”-Forward Controls Design

How do I find the burr?

To find the burr if it is not seen by the eye simply run your finger over the back of the bolt carrier. If you still can’t find it try using a cotton swab, the lightly bound cotton will catch on the burr and rip off

How do I remove the burr off of the carrier?

Some light filing will do the trick or even crocus cloth. Try to go easy and not remove a lot of metal, just where the burr is.

Can I continue to run that buffer?

Yes! If the damage isn’t enough to further damage your carrier or the buffer retaining pin or even your own fingers, yes, run the gun.