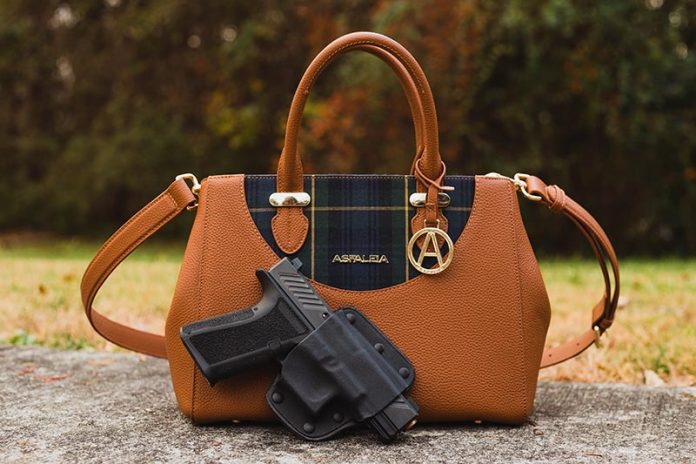 The Asfaleia Tote is primed to help carriers interested in a more fashionable approach to off-body carry. (Photo: Jacki Billings/Guns.com)

CHECK OUT THE NEW SHADOW SYSTEMS MR918 AT GUNS.COM

A new concealed carry bag company has arrived, introducing a more stylish approach to the concealed carry conundrum. Asfaleia (pronounced as-fall-ya) is Greek for “safety” and the company looks to bring just that with its new line of totes, purses, bags and backpacks. With an array of products to choose, I jumped at the opportunity to check out one of Asfaleia’s tote bag options, the aptly named Concealed Carry Tote.

Tell Me More: The Basics The bag is fairly roomy. The author was able to fit her must-have purse items as well as the Shadow Systems MR918 in Crossbreed holster. (Photo: Jacki Billings/Guns.com)

Life as a mom entails a whole lot of extras – extra Kleenex, extra snacks, extra bandaids. For that reason, you’ll usually find me with a midsized bag capable of tackling all the accouterments without bogging me down. When deciding which Asfaleia bag was best suited for me, I opted for the Concealed Carry Tote in size small. The Large, which measures 13.5-inches by 10-inches by 5.5-inches seemed just a tad too big for everyday toting; but the small, measuring 11-inches by 9-inches by 4.5-inches, appeared just right. Available in black, brown, navy, pink and dust pink, I ordered the brown.

Upon unboxing, I was immediately impressed by the craftsmanship and quality of the bag. Let’s be real, most concealed carry bags look like they waltzed out of a 1980s flea market; but the Asfaleia design was well made and, dare I say, fashionable. Constructed from genuine leather and equipped with gold hardware, the bag looks more like what you’d see on the shelf of Coach. The plaid accent on the front offers a subtle pop of color that pairs nicely with the brown and gold coloring. The bag is made from quality leather and sports gold accents for a classy look. (Photo: Jacki Billings/Guns.com)

Inside, the bag is decked out in black fabric – a nice bonus for us that don’t like to clean the inside of our bags frequently or have a tendency to leave cap-less pens wandering recklessly. The company’s name is emblazoned in white on the inside, in case you missed it in gold lettering on the outside. This was one factor I wasn’t so keen on and I would have preferred a logo-free interior. It’s a minor squabble, but worth stating.

The bag’s organizational skills are on point, so the logo is easily forgiven. Offering multiple small pockets, users can easily stash keys, cellphone, chapstick, headphones, etc. in the small pockets lining the interior. As someone constantly losing items to the depths of my purse, this minor detail was a huge bonus and alleviated the pressure of digging for needed items.

It’s Cute, But What’s So Special?

Asfaleia’s tote also comes with the option of a Type IIIA Soft Armor Panel that slips in a dedicated pocket for added protection on the go. (Photo: Jacki Billings/Guns.com)

In addition to organizational pockets for essentials, the bag also features two hidden pockets – one for weaponry concealment (more on that in a minute) and the other for a ballistic armor panel. Yeah, this bag rolls deep with the protection. The ballistic panel itself is sold separately, retailing for around $80, and is Type IIIA rated. What does this mean exactly? It’ll stop most of your handgun rounds to include .44 Mag, 5.7x28mm, .357 SIG, .357 Mag, and 9mm. Rifle rounds will most likely slip through as will knives; but if you run into a shady situation with handguns involved, you have a better chance of coming through unscathed.

The ballistic armor adds a little more weight to the bag. It’s not noticeable during the regular course of the day, picking up and putting the purse down, but it will wear on you after long periods on the shoulder. Now you may be asking why it’s advantageous to sport armor in your bag, especially if it might weigh you down on the go? For me, I found it very useful in non-permissive environments – that is, locations that don’t allow me to carry. It’s one more layer to add to my overall self-defense plan in places like schools and the post office where I am reliant on everything but my firearm. It’s also worth considering if you have a school-aged child as it might offer some protection should an unfortunate event unfold on campus. The gun rests in a dedicated pocket equipped with hook-and-loop to allow a holster to attach. The author opted for a Crossbreed shell for her Shadow Systems MR918. (Photo: Jacki Billings/Guns.com)

If you’re out on the town and non-permissive locales aren’t an issue, then the concealed carry pocket can be utilized to tote your preferred firearm. Just to be clear, most reputable instructors and experts, myself included, do not promote off-body carry as there are too many factors introduced into the carry situation that can lead to accidents or produce more problems for the carrier; but there are those who are committed to off-body. For those that are determined to carry in this manner, this purse does deliver a dedicated concealed carry pocket. Lined with hook-and-loop (aka Velcro), the interior is outfitted with loops and pairs with a holster sporting hooks.

For this review, I pulled out my trusty Crossbreed Holster shell that normally pairs with the Modular Belly Band. The shell is cut for the Glock 19 which also means it fits the new Shadow Systems MR918. Since I prefer a larger carry gun, I wanted to really put the purse to the test and see if it could handle the sub-compact. The Crossbreed shell and Shadow Systems pistol nestled into the concealed carry area – which secures with a magnet. My gun was a bit too tall for the pocket to full close which would leave it visible should anyone peer into my purse. Despite its potential visibility, the height made it easier to access when drawing because I wasn’t fighting against another closure.

How Does It Stack Up?

The purse itself uses a magnetic closure so that carriers don’t have to fiddle with buttons, straps or zippers to access the pistol. This is a logical design and one that works well. Though my draw time was much slower coming out of the purse than in my usual Dark Star Gear AIWB holster, I was able to thrust my hand into the purse, breaking the magnetic seal, to get to my gun. The author had to use one hand to draw the firearm and the other to hold the bag in place. (Photo: Jacki Billings/Guns.com)

Drawing took some practice and I highly suggest those that regularly off-body carry put in the time to acclimate to the awkward reach. I had to really dig into the purse to get a good grip on the gun and then I had to make sure my left hand was holding onto it so it wouldn’t move on the draw. Standing perfectly still it wasn’t too tough. Moving, on the other hand, required more practice.

This isn’t a unique fault to the Asfaleia bag as nearly every concealed carry bag I’ve ever tried suffers from this issue. It’s why, frankly, I don’t prefer this mode of carry. That being said, the bag is sturdy, and the Velcro does keep the gun in place. Though I griped about the extra weight from the Ballistic Armor earlier, it ended up coming in handy when concealed carrying as it helped keep the bag in place on the draw.

All in all, the bag does what’s intended – it retains the gun while still allowing reasonable accessibility.

The Verdict: Is It Worth The Price? The tote is inconspicuous and stylish — perfect for the concealed carrier who doesn’t want to look like their carrying. (Photo: Jacki Billings/Guns.com)

Asfaleia has gone out of its way to craft a stylish bag that looks like it belongs on the shelf of a high-end boutique rather than on the shelf of a gun store. It’s shining accomplishment definitely goes to its ballistics panel which I think makes for an excellent Option B in non-permissive environments — a real winner for teachers who can’t carry as well as dads or moms looking to keep fashion-conscious teens safe at school. While it suffers the same pitfalls as all off-body options, Asfaleia’s other strengths make it a viable contender for those committed to carrying in a bag.

There’s only one real catch here – price. Like any designer bag, Asfaleia’s designs aren’t cheap. The small Concealed Carry Tote I reviewed comes in at $299 while it’s larger sibling retails for $329. That’s the tip of the iceberg. Some of the company’s other bag options reach as high as $350; but if you’re tired of ugly carry bags and want something modern and classy, consider Asfaleia an investment.

Check out Guns.com’s inventory of new and used concealed carry pistols ready to pair with your favorite mode of carry. (Psst…don’t forget the ammo!)