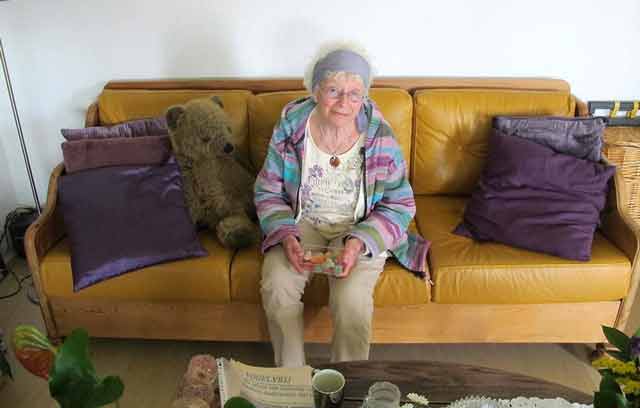 Freddie Oversteegen was just 14-years-old when she joined the Dutch resistance during the second World War along with her sister, Truus, who was 16-years-old at the time. But the Oversteegen girls had a rather unusual job: Set up the nazis to meet their deaths by seducing them.

Oversteegen, who is now 90-years-old, said she now thinks a lot about those who lost their lives during that dark time.

“I remember how people were taken from their homes,” she said in a recent interview with Vice. “The Germans were banging on doors with the butts of their rifles—that made so much noise, you’d hear it in the entire neighborhood. And they would always yell—it was very frightening.”

Oversteegen said they always helped to hide those in need, even before her parents divorced and the family lived on a boat.

“Before the war started in the Netherlands—when we were still living on the boat—we had some people from Lithuania hidden in the hold of the ship,” Oversteegen recalled. “And during the war, we had a Jewish couple living with us, which is why my sister and I knew a lot about what was going on.”

She said one day a man wearing a hat showed up at their house, after they no longer lived on the boat with their father, and asked her mother if he could talk to the girls about joining the resistance. Their mother – and the girls – agreed, but they really had no idea what they would be doing.

“I thought we would be starting a kind of secret army,” Oversteegen said. “The man that came to our door said that we would get military training, and they did teach us a thing or two. Someone taught us to shoot, and we learned to march in the woods.”

But their main job was simple: Seduce nazis.

Oversteegen recalled a time her sister met a man in a high-end bar, before he met his death.

“She was like, ‘Want to go for a stroll?’ And of course, he wanted to,” she recalled. “Then they ran into someone—which was made to seem a coincidence, but he was one of ours—and that friend said to Truus: ‘Girl, you know you’re not supposed to be here.’ They apologized, turned around, and walked away. And then shots were fired, so that man never knew what hit him.”

Oversteegen said a hole was already dug for the man, but they never stuck around to see that side of the job.

After the war, Oversteegen’s sister took to public speaking as a means of coping, while Oversteegen said she got married and had kids, regularly babysitting Truus’ children as well.

The two often talked of the war.

“We never had to say, ‘remember when,’ because it was always at the top of our minds,” she said.