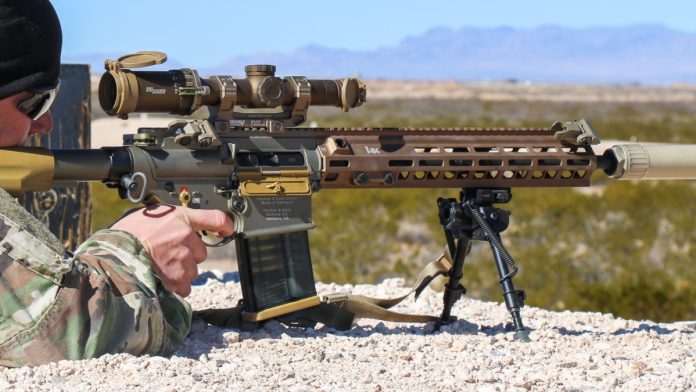 Soldiers at Fort Bliss recently fielded the new SDMR in a series of tests before the rifle reaches a wider Army-wide audience.

Troops of the 1st Infantry Division were photographed in late January at Bliss’s expansive McGregor Training Complex with the rifle, reportedly assisting PEO Soldier with collecting data on the newly developed weapon system and ammunition before mass fielding. The Army is moving to adopt some 6,000 Heckler & Koch G28E rifles as the service’s new SDMR platform, replacing modified M14 rifles used for the purpose over the past decade. While the same 7.62x51mm-caliber rifle, when classified as the M110A1 Compact Semi-Automatic Sniper System uses a Schmidt & Bender 3-20 power variable scope, Army officials said the SDMR variant, meant for use at the squad-level, would use an optic geared more towards close-quarters battle. As such the branch chose Sig Sauer’s 1-6x24mm Tango6 optic last May as the designated glass for the system.