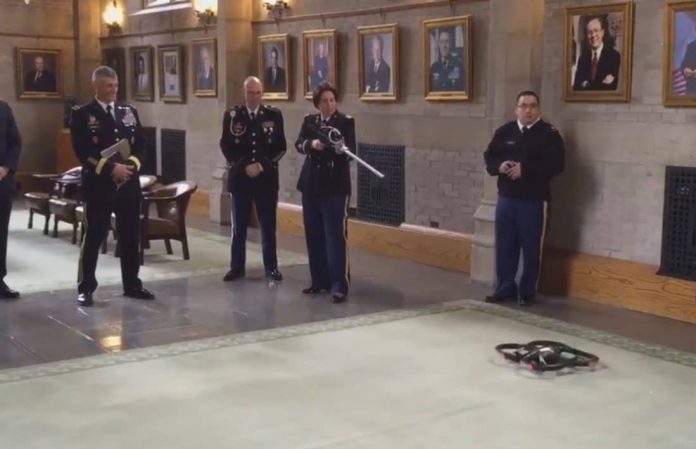 Three Army captains at West Point had a chance to demonstrate their $150 drone interrupting Cyber Capability Rifle to visiting brass this week.

The device, shown off to Secretary of Defense Ashton B. Carter on his first visit to the U.S. Military Academy, is the brainchild of Captains Brent Chapman, Matt Hutchison, and Erick Waage, members of the Army Cyber Institute at West Point’s Strategic Initiatives Group.

Not an official Army program, their “rifle” fires radio waves rather than bullets and was made in-house with readily available parts including a Raspberry Pi, Wi-Fi radio, and antenna, then mounted on an M4 stock.

“Successfully able to remotely disable an overhead UAV, we developed this proof-of-concept device in a dusty backyard garage, as amateur engineers and do-it-yourselfers, in about 10 hours with about $150 of spare parts,” wrote the captains last year for War on the Rocks.

“It was something that we built in order to illustrate the power of enabling the soldiers at the tactical level to ‘make’ in support of a mission,” Chapman told Popular Mechanics. “It’s an idea we call tactical making, or expeditionary making.”