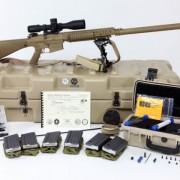 Following up on a Sources Sought released back in 2012, the US Army is moving forward with a potential acquisition for the next-generation Semi-Auto Sniper System (SASS), the aptly named “Compact-SASS” (CSASS). The current SASS is the M110 is manufactured by Knights Armament, chosen after a competition with Remington and DPMS. Reducing weight is a major priority. […]