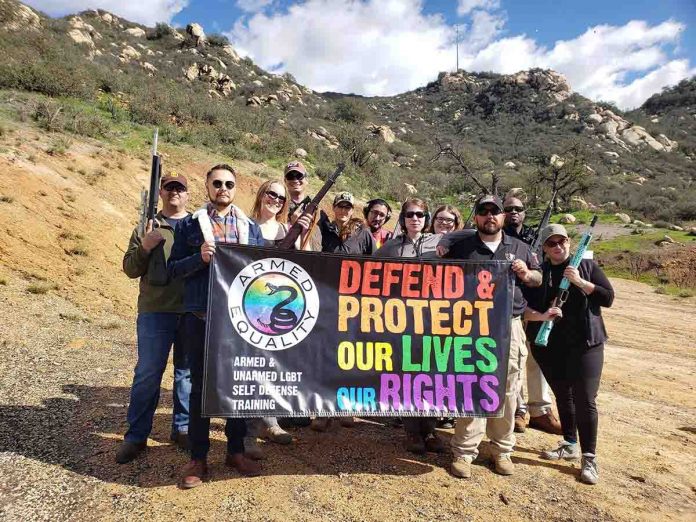 At a Memorial Day barbecue, a group of pro-gun supporters sit around a concrete table, eating and enjoying each other’s company like many Americans on this holiday. There’s a MAGA hat next to a Bernie hat and its wearers, a straight man and a trans woman, are brought together to support and celebrate a common issue: guns.

This was what Piper Smith, founder of Armed Equality, envisioned when she first established the pro-gun group in 2016. An LGBT friendly gun rights group, Armed Equality focuses on introducing LGBT members to the concept of self-defense while also educating those already immersed in the Second Amendment lifestyle about the LGBT community. It’s a give and a take. A shooting group where inclusivity is key. Anyone can join — gay, straight, bi-sexual or trans. No matter your color or creed, all are welcome.

“If you are LGBT inclusive and you are pro-2A you are more than welcome in our group,” Smith emphasized at the beginning of her chat with Guns.com.

Despite differing political views, the members of Armed Equality regularly come together to honor their shared love of guns, gear, training and the art of self-defense.

“A lot of people really love finding a group in a community in a circle that prioritizes viewing everybody else as human beings,” Smith told Guns.com. “ I’d say it’s actually a solid third of the membership are average straight white male pro-2A guys. We have some of the most diverse events that I think have ever happened in the United States.” Armed Equality wasn’t always on the forefront of Smith’s mind, though. She said, like most LGBT members, her focus was simply on living her own life. It wasn’t until the Pulse Nightclub shooting in Orlando, Florida in June 2016 that Smith realized the LGBT community faces a mounting tide of hate crimes but most of its members come unprepared for such events. Hearing the stories of innocent men and women, hunkered down unable to protect themselves amid volleys of gunfire from the lone shooter, spurred Smith to action.

“I started to realize that the vast majority of the so-called mainstream LGBT community was pretty anti -2A and pretty anti-self-defense and I didn’t understand it. I think we know it’s not logical,” Smith explained. “We have to admit that bad things happen and it doesn’t hurt to be prepared.”

Wanting those in her community to feel safe armed with the knowledge of self-defense, Smith created Armed Equality. Based in San Diego, the group centers on providing gun training and medical training to those in the LGBT community as well as any others interested in learning how to defend themselves.

“I didn’t see anybody else making it happen. There was no one else stepping up,” Smith said. “I want (my LGBT friends) to be safe and it seemed like at no point in their entire lives they’d been exposed to the idea that you can protect yourself. You can make yourself a much less vulnerable target and it’s actually not even that difficult to do that. It’s just going to require some training and we can make that happen.” Smith explained LGBT gun owners straddle competing political ideologies. That decision remains tough for those that must weigh their livelihood against their need to protect themselves. Smith thinks that the key to bolstering the Second Amendment lifestyle means removing political rhetoric of left versus right and focusing instead on human beings. Though the road of inclusivity on both sides of the political arena may prove long and arduous, Smith remains ever the optimist.

In the meantime, Smith and Armed Equality forge ahead in the gun space, educating and demonstrating that gun owners come in every shape, size, color and orientation. Amid all the drama and criticism, Armed Equality focuses on what it does best — bringing resources, training and education to gun enthusiasts.