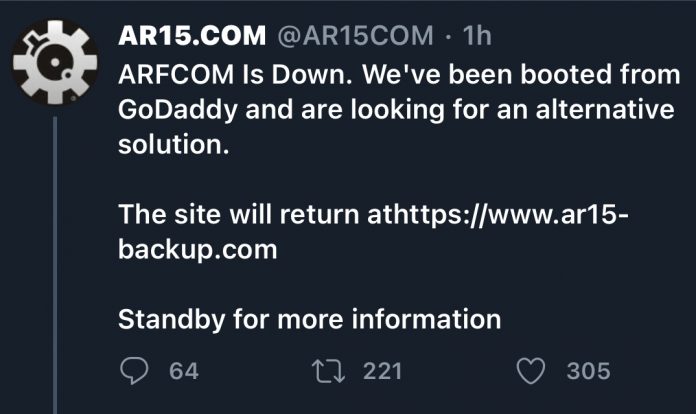 The popular firearm message board AR15.com, commonly referred to as ARFCOM got the boot from GoDaddy it appears.

No official explanation for it is currently in circulation, although that may change. The moves by Big Tech to quash anything remotely resembling insurrectional speech, in their efforts to root out hiding places for the “real deal” of actual organization (as if that could ever work on the internet as a whole) appears to be expanding. They are going to be using the broadest possible definitions.

The massive scope of the AR15.com message board and the number of topics covered makes it that much more likely they could find some pretense to pull the plug, and it appears they did. Or they just did and will cover pretense later, if they can be bothered at all.

Jokes aside, message boards and forums are under the magnifying glass and the magnifying glass is angled for the sun to do its work. For those of you who actively speak in groups, forums, and social media pockets, be very aware and make your groups and friends aware that the hosting entities are in a “Nuke ’em first, due process later.” type of mood when it comes to posts.

Yes, Twitter just lost $5,000,000,000 for this type of censoring action but we are currently sitting in mid-swing of the digital axe on the internet chopping block. Momentum is a difficult thing to cease.