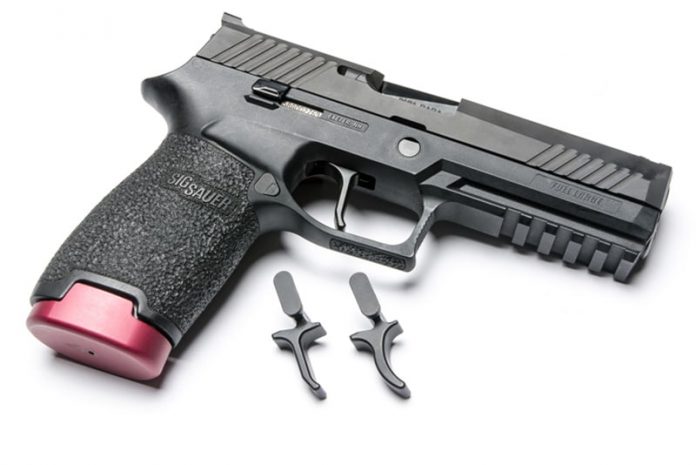 It was recently announced on our web site and dozens of others that the United States Army had selected the Sig Sauer P320 handgun to replace the Beretta 92 series pistols. It was also announced around this time that the United States Department of Homeland Security’s Immigration and Customs Enforcement (ICE) division had also selected the Sig P320 as their new sidearm.This prompted an immediate backlash by some groups who said the P320 trigger was terrible and had poor angles. Little did these people know that Apex Tactical Systems already had the solution to their complaints on the market for quite some time now.

Apex Tactical Systems has built a reputation for taking good guns with average triggers and transforming them into good guns with great triggers. When people said that the company couldn’t possibly take a trigger from a module style gun like the Sig Sauer P320 and change the geometry and lighten the pull Apex Tactical Systems seemed to accept that challenge and prove all the neigh sayers wrong. Not only did Apex do what they said they were going to do but they made two different styles of trigger for the P320 that are both lighter than the stock trigger. When you add that to the fact they new triggers install without the need of any tools it really just turns the whole deal into what I like to call a “Value +” set up. Lets take a look at the specifics of the two triggers.

I’ve tried the Sig Sauers P320 trigger at the local big box gun stores we have here locally in Alaska and I will say that I didn’t find the trigger terrible at all. That being said I am very curious to see how the pistol feels while using the flat trigger set up from Apex Tactical Systems. Flat triggers seem to be polarizing to some degree, I’ve found more than once when I ask someone about trigger jobs at all especially Apex drop in triggers some people just seem to loose their minds. Other times I have talked to people who swore that a flat trigger changed everything about how the trigger pull felt and how natural the straight trigger feels on their finger tips. I will admit I have zero trigger time on flat triggered guns aside from my own 1911 pistol.

If you are a Sig Sauer P320 owner we would like to hear from you, we have featured the pistol several times and have yet to have anyone who actually owns the pistols comment on an article. I know the pistol has many people in an uproar, maybe not as much as the Beretta Model 92 caused when it replaced the Colt 1911 pistol, but their is a fair amount of grumbling. If you want to submit your comments anonymously that’s fine too. We have no problem with fielding your comments off line and getting back to you. The flat trigger movement is one that seems to be drifting into many different pistol platforms over the last two years and its intriguing to me.

If I was going to install a flat trigger I would be sure to retain my original trigger just incase I needed it or I felt like changing back to the original trigger set up. One reason I personally would keep the original manufacturer parts is just in the off chance the pistol had to go back for warranty work. Especially in a system like the one that the Sig Sauer P320 has, where it’s so simple to swap the original trigger back in and with no tools needed it just makes sense to us. One final note before we forget, Apex has made installing this trigger so easy that they have included an quick and easy to follow video. You can see that it literally takes two minutes tops to change the trigger out and reinstall the module back into the Sig frame.