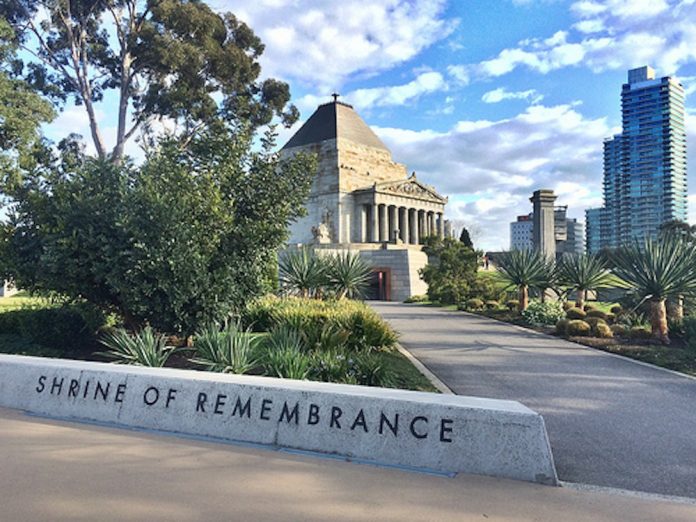 Whiskey-5, as in a Who/What/Where/When/Why. Be sure to read up and find out why you should be having a Gunfire Breakfast at least one time this month. Mad Duo

ANZAC Day is coming up on April 25th, and I wanted to share a little bit of the cultural significance behind it. It’s always meant a lot to me, especially being an ex-pat, and actually means more to me than Australia Day, January 26th.

Anzac Day marks the anniversary of the first campaign that led to major casualties for Australian and New Zealand forces during the First World War. The acronym ANZAC stands for Australian and New Zealand Army Corps, whose soldiers were known as the Anzacs. In 1915 the Allied forces landed on the Gallipoli Peninsula in an effort to take Constantinople and force Turkey out of the First World War.

But what had been planned by the British as a bold strike to knock the Ottomans out of the war became a stalemate. After the very difficult landing at what has been now officially renamed ANZAC Cove, the campaign dragged on for eight months. During the eight month campaign Allied casualties included 21,255 from the United Kingdom (of which 4000 were Irish soldiers from the Royal Irish Fusiliers), an estimated 10,000 dead soldiers from France, 8,709 from Australia, 2,721 from New Zealand, and 1,358 from British India. 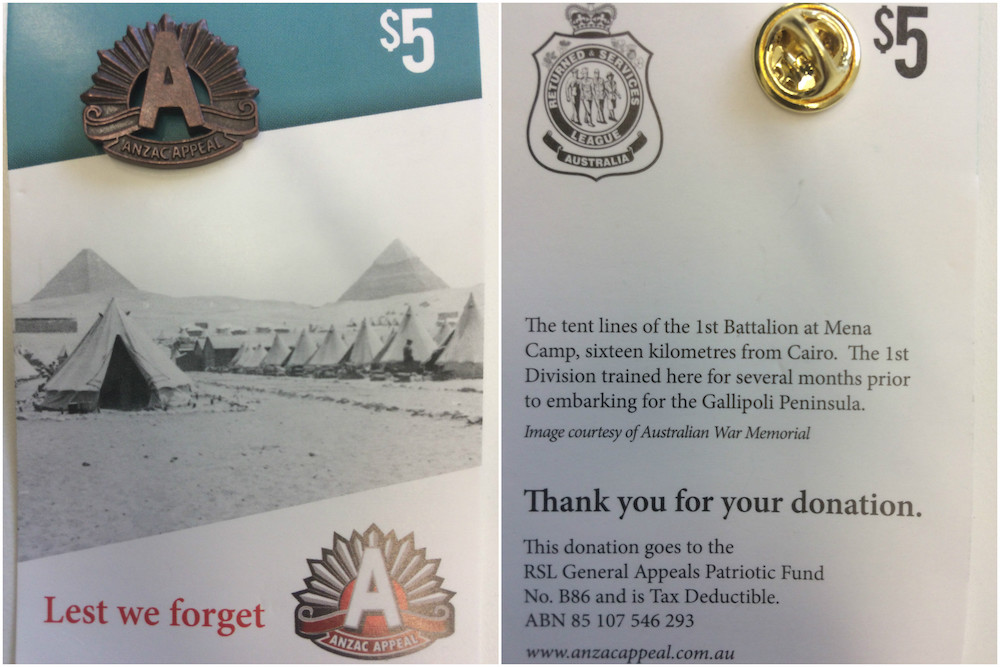 News of the landing at Gallipoli made a profound impact on Australians and New Zealanders at home, and 25 April quickly became the day on which they remembered the fallen. At the end of 1915, the Allied forces were evacuated after both sides had suffered heavy casualties and endured great hardships. The campaign actually failed in its objectives, but in the struggle, the Australian and New Zealand forces ignited the national spirit. And the concept of the ANZAC spirit was forged.

The Ottoman Army was commanded by Mustafa Kemal (later known as Atatürk, “Father of the Turks”). He fought the Allies into a standstill, later became the founder of modern Turkey, and addressed the first observance of ANZAC day in 1934 with the following dedication, now inscribed in Canberra, Wellington and at the Ari Burnu Cemetery on ANZAC Beach.

“Those heroes that shed their blood
And lost their lives.
You are now lying in the soil of a friendly country.
Therefore rest in peace.
There is no difference between the Johnnies
And the Mehmets to us where they lie side by side
Here in this country of ours.
You, the mothers,
Who sent their sons from far away countries
Wipe away your tears,
Your sons are now lying in our bosom
And are in peace
After having lost their lives on this land they have
Become our sons as well.”

This basically sums up why ANZAC Day means so much to me. 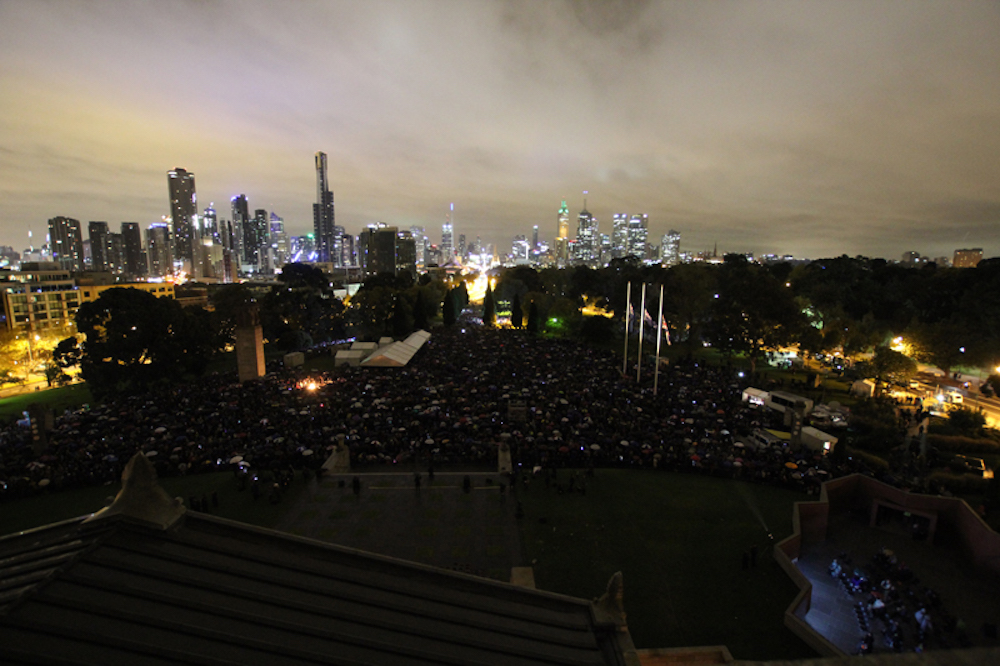 With the coming of the Second World War, Anzac Day became a day on which to commemorate the lives of Australians and New Zealanders lost in that war as well and in subsequent years and wars, with a symbolic Dawn Service.

Thronging as cities throng to watch a game
Or their own herds move southward with the year,
Secretly, swiftly, from their ports they came,
So that before half earth had heard their name
Half earth had learned to speak of them with fear;

Because of certain men who strove to reach,
Through the red surf, the crest no man might hold,
And gave their name for ever to a beach
Which shall outlive Troy’s tale when Time is old;

Typical modern dawn services follow a pattern now familiar to generations of Australians, containing the following features: an introduction by an MC, hymn, prayer, an address, laying of wreaths, recitation of the Ode, the playing of the Last Post, a minute of silence, Reveille, and the playing of both the New Zealand and Australian national anthems. 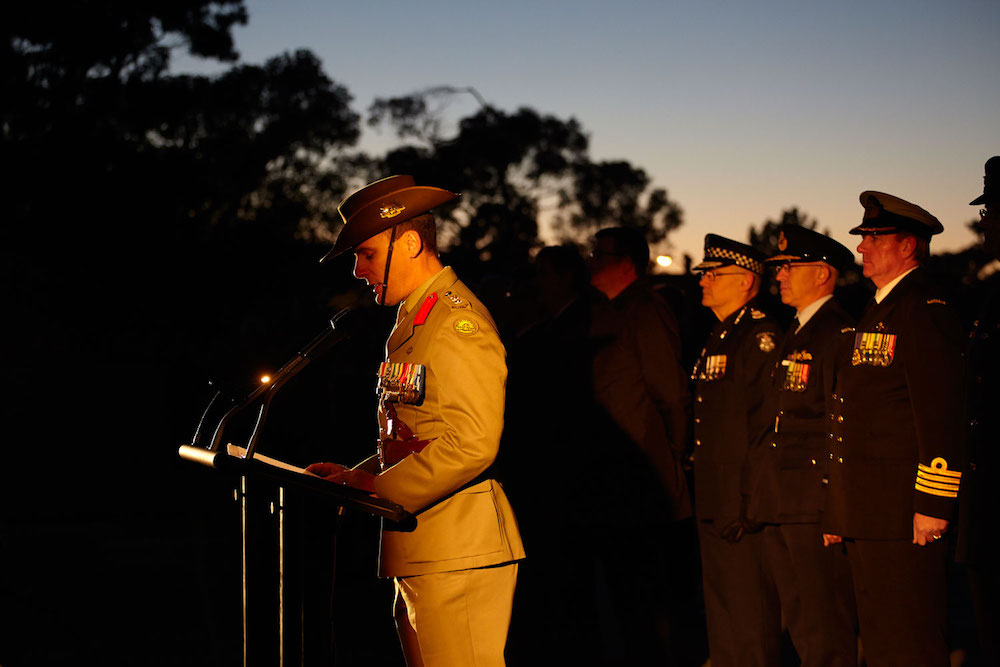 “They shall grow not old, as we that are left grow old;
Age shall not weary them, nor the years condemn.
At the going down of the sun and in the morning
We will remember them.”

I started going to the Dawn Service in my first year back in Australia as a young adult, when I was in my second last year of high school. My father’s reticence to go to any sort of ceremony stemmed from his treatment as a Vietnam veteran, I think. But I and my mates went, and even after we all went our separate ways after High School we would catch up for the Anzac Day ritual. One of the traditions of Anzac Day is the ‘gunfire breakfast’ (coffee or tea with rum added) which occurs shortly after many dawn ceremonies, and recalls the ‘breakfast’ taken by many soldiers before facing battle. I serve hot sweet  Turkish coffee, black as the night before dawn, and spiced like the diggers might have experienced. None of us have served, but a couple of our dads have, plus I have uncles, cousins and grandfathers who have. The least I can do, the least any of us can do, is take the time to remember.  I’ve taken my daughters to the post-dawn parade that follows, and tried to explain why it is important. 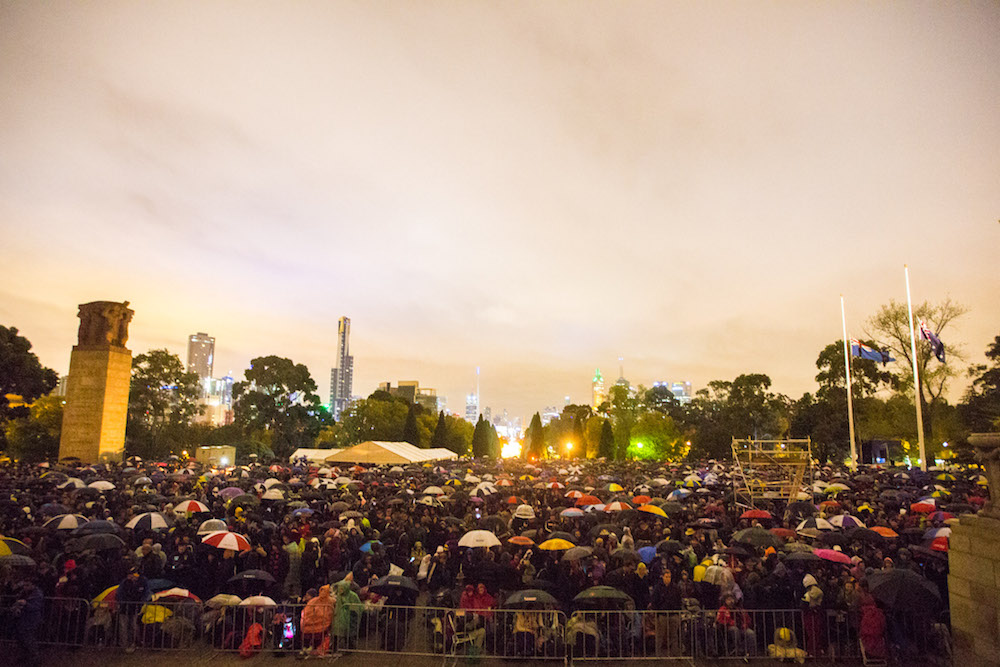 I try to make it to The Shrine, in Melbourne when I can, but the services at local RSL’s can be equally moving.

So, this coming April 25th, wish an Aussie or a Kiwi a happy ANZAC day. Shout them a beer.
-AJ