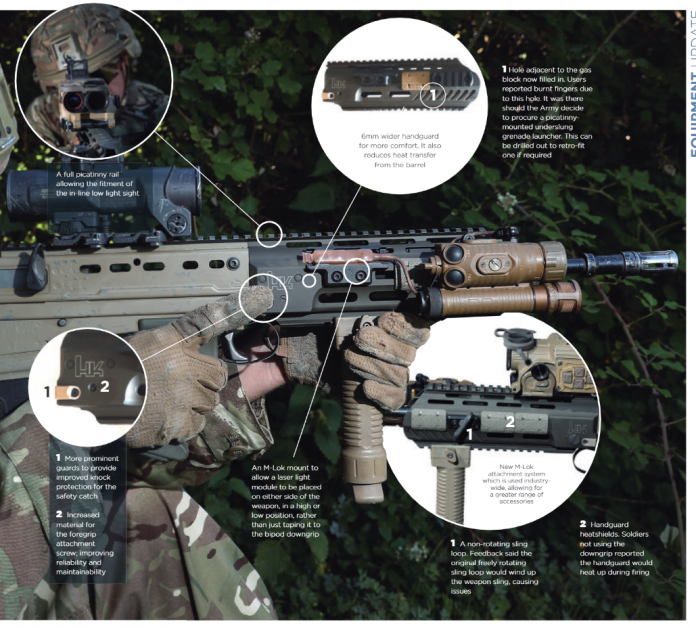 I read this announcement here first.

M-LOK has been added to the L85/SA80’s list of improvements for the service rifles first Product Improvement Program (PIP) as they are known here in the US DoD. A service wide or at least mass implemented upgrade to an item in armories to improve the utility to the individual using it.

The SA80 had a troubled start to life as it was designed by a group who had never before designed a rifle. It had to be fixed by H&K. As GWOT rolled on Daniel Defense added an upgrade series too, rails.

The SA80 has a more recent memory troubled reputation than the AR-15, and in the UK they don’t have nearly as large a group of folks providing real time relevant information on the rifle like they do for the AR-15 here in the US. Heck you’ll find much more info on the FAL than on the SA80 in the UK public, it is a better known rifle to them at large.

H&K managed to work the bugs out is the short version and the MoD is keeping the rifle.

The rifle itself is a bullpup AR-18 essentially. It isn’t a poor design or one that is drastically inferior to other 5.56 NATO carbines, especially the bullpups. I certainly wouldn’t pick it first given a slew of options, but I’m also not trained on it. My time and training bias me to pick the SCAR, X95, and M16/M4 before anything else. Were I handed an SA80A2 or A3 however and told, “this is what you’ve got.” then it is time to figure out the rifle and get to work. With a little familiarization time I’m sure I’d have it down in a day or so.

Anyway. The Brits have joined America (and if I recall correctly, Poland) in the CRANE backed selection of M-LOK as the negative space mounting system of choice. This change was done after the A3’s hit service start in 2018 and were designed ‘in the field’ with 3D printing technology. Soldiers would give feedback and it would be rapidly prototyped to put on the rifle.

The most visible change is the transition from HKey (Heckler & Koch’s own KeyMod system) to M-LOK attachment points. The changes were iteratively prototyped using 3D technology allowing the Infantry Trials and Development Unit (ITDU) to test changes as they were made. Major Richard McMahon, a senior member of the British Army’s dismounted close combat through-life support team said “the ability to produce 3D printed mock-ups allowed the project to move at substantial pace, with various designs tested and the ability to make quick changes as issues were encountered.” McMahon also noted that ITDU had procured its own 3D printer to allow greater experimentation in-house. -TFB

Also being added are rotation limited QD points for slings, something that still eludes most of the US service rifles even though it shouldn’t. More space for air-cooling and removal of a feature that was for an optional underbarrel grenade launcher the MoD hasn’t integrated, but still can with a milled in modification.

The US also appears to be moving away from underbarrel GLs as the M320 is often carried stand-alone instead of under an M4, at unit discretion. There is merit to carrying two lighter independent systems, since they are deployed quite differently on different threat types, than one heavier awkward combined system.