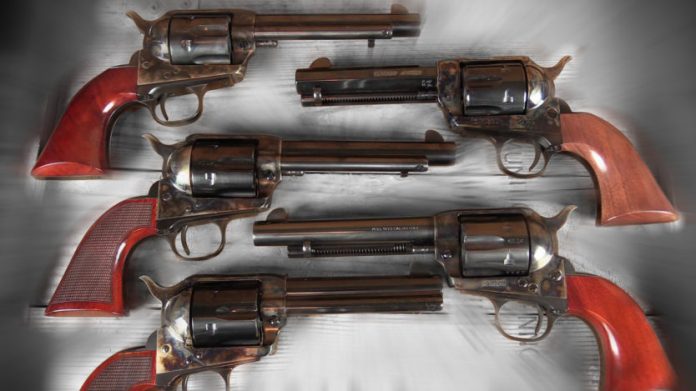 The last eight years saw an unprecedented expansion of gun ownership in America.  Some of us already owned a few before the “scare era” of gun buying began.  Those who did now own dozen, and those who are new gun owners may have listened to the suggestions of others as to what to buy in case it might become illegal before the next paycheck.  There’s no need to publicly identify which of these fits you; regardless of which category I bet you’re starting to look for something new.

Surplus guns are no longer $75 delivered and buying used is almost the same hassle as new in most states so where do we turn?  Perhaps something that is both new and old?  While the coyote-tan and multi-cam tacti-cool operation operated on a few company kept churning out designs 140 years old.  One of the earliest common carry piece has long been a fascination of mine and 140+ years later is still available: The 1873 Single-Action Army Revolver chambered in .45 Colt.

Before the debate starts about .45 Colt V .45 Colt let’s just accept that the correct and registered name is .45 Colt.  With that out of the way we can enjoy a projectile of typical weight between 220-

255gr moving around 600-800 fps.  That’s right folks, the ancient .45 Colt yields about the same energy as the .45 ACP (Auto COLT Pistol).  .45 Colt just does it with a bit more fan fare in the way of a larger case and a lot more smoke.  If you’ve never tried the cartridge before fear not, it is a gentle beast.  Not only is it fun to shoot, but it’s being made by many popular manufacturers such as Fiocchi and still readily available.

Fear not the cost-per-round, loading and unloading slows down your consumption plenty when using a Single-Action.  Thanks to the internet there’s no longer a reason to claim ignorance as a reason to avoid these modern antiques.  Watch the video below to learn a bit more about cowboy-action fun with pieces by Uberti, Cimarron, and Taylor’s & Co!