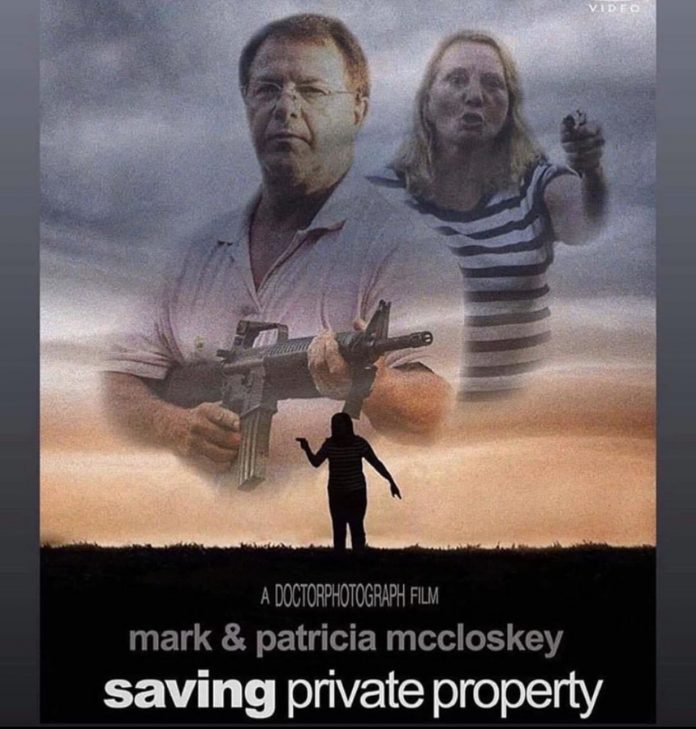 The McCloskey couple have overrun Social Media, especially in 2A circle, in a confused blitz of combined praise and mockery. The now famous lawyers are the subject of a myriad opinions ranging from “Hell yeah, that’s what the Second Amendment is for!” to “Ok, BoomerKaren.”

And the memes are truly legendary. Just truly spectacular.

For those unaware, the McCloskey’s are lawyers who lived in a legitimately gated community in a $1.1 million dollar home that is just as fancy as you could imagine. They had the misfortune, however, of living in the same community as St. Louis Mayor, Lyda Krewson, who had drawn the ire of the latest BLM protest march. The march started in the public domain and on public streets but then they broke down the gate into the private, marked ‘No Tresspassing’, neighborhood to reach Krewson’s home.

This put the crowd going right past the McCloskey’s home. The McCloskey’s responded to the group, who had just broken down the gate and entered the outdoor properties of the neighborhood, by grabbing an AR-15 and a pistol that looks like a Walther PPK and pointing them at the trespassing protest. They did this while barefoot and looking very very suburban. Their weapons handling was… sub-par. The specific legality of the situation is probably in the McCloskey’s favor, however opinions are all over the board and the optics are.. entertaining.

From the perspective of the (trespassing) crowd, who did break down the gate and certain reports have alleged were armed in some manner, this was two rich white people waving guns at them even though their overall aim was to yell at the Mayor down the street.

From the McCloskey’s perspective, a large group that is associated with instances of aggravated assault, arson, and looting, just forcibly entered their private neighborhood with unknown hostile/semi-hostile intent. The group had proven, that at the very least, destruction of property is on their list acceptable actions.

This is the very definition of they said/they said and they thought/they thought. It’s an optics and perspective game and who you believe or was in the right or in the wrong and to what degree is based entirely on perspective. Some will justify the McCloskey’s actions and their firearms brandishing and others will excuse the vandalism that allowed the crowd access to the private neighborhood. You all fall somewhere on that scale and have an opinion.

Couple in their 60’s, menaced by BLM mob who broke through their community gate, protect themselves by brandishing firearms.

Both are reasonably accurate headlines from the two points of view. I prefer a third perspective, however.

From where I sit, I think the McCloskey’s did what they felt they had to do. They just did so in a hilariously cringey manner.

And we get to benefit from it.

I love the internet.

Demand for M16A2 style rifles is about to go way up too. I suspect to see this arise again at the end of October in 2A Halloween circles.