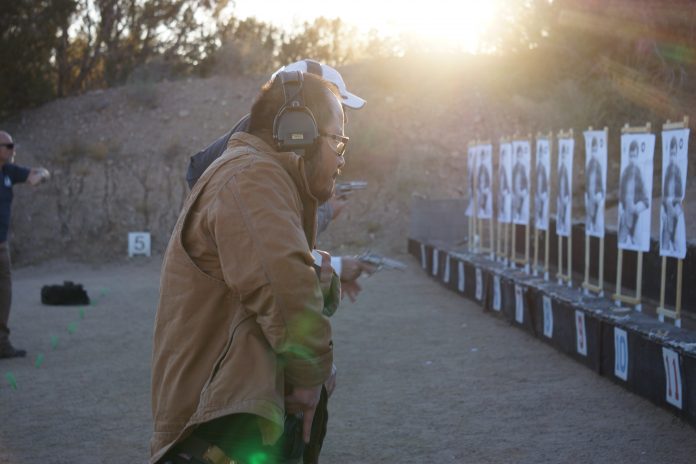 In this series of images, we’ll look at a breakdown of a very well executed draw from the appendix position by at student at the 2021 Revolver Roundup. The shooter was using a JM Custom Kydex AIWB holster and carrying a Ruger Speed Six, which basically makes him awesome by himself. In the first image, used in the head of this post, we can see he’s established his master grip, with his trigger finger straight down along the line of where his holster is.

In photo 2, the student has begun moving the pistol vertically to clear his holster, note again how straight and well clear of the trigger his index finger is.

Here you can see the shooter has begun to rotate the gun to the horizontal, again with his finger well clear of the trigger guard and the barrel clear of his support hand.

Now the gun begins to “get on the escalator” as I call it as the support hand approaches the grip. Note: finger still clear of the trigger, and his hands are going to come together in a natural position, not artificially close to the chest.

In this photo, the shooter is almost done completing his grip, and because the gun is flat and level towards the target, he begins to move his finger towards the trigger.

The strong hand thumb starts to come down, which completes the thumbs forward revolver grip, and now the shooter is fully on the trigger, starting to roll through his press.

The grip here is now fully formed, the gun is on target, and the shooter is fully engaged in pressing the trigger. The next photo in this series shows the gun in full recoil, as the shooter completed the shot process. He got a good hit too.

This is an excellent frame-by-frame example of how I teach the appendix draw, and this guy really did everything as right as I could ask any student to. This was in a class in the Roundup taught by Chuck Haggard.