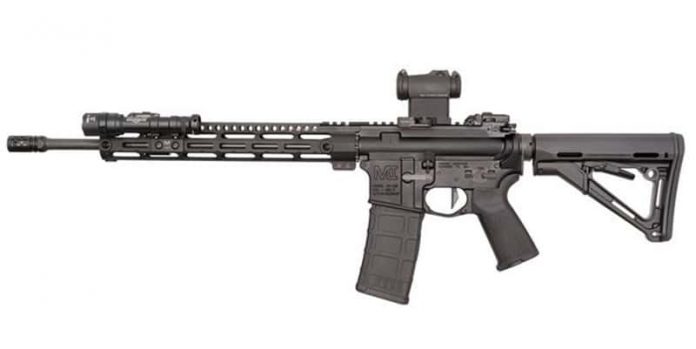 From the time that Europeans first landed on American soil, the gun has drastically influenced the course of events. Guns helped establish the original thirteen colonies, with early muskets giving settlers an advantage over Native Americans. “The shot heard round the world” that sparked the American Revolution was the first of many Brown Bess muskets to be used during the war against Britain. Guns were used throughout the years of slavery to oppress and control the inhumane industry throughout the southern United States. Then, during the American Civil War, the Springfield Musket played a large role in the liberation of people who were enslaved. Those same muskets were used to defend the Confederate Soldiers.

Later, the gun that won the West–the Winchester repeating rifle–was used to uproot Native Americans from their lands by forcing them away from their homes, inflicting a near-genocide upon them. As time has progressed, so has the weapon. American soldiers, with the aid of the Thompson submachine gun, heroically stormed the beaches of Normandy to liberate Europe and defeat Hitler. This is the same weapon that was identified as an essential part of the Prohibition-era gangster uniform.

This historical role of firearms throughout American history is unequivocally highly significant. Given that long and important history, the technicalities of firearm ownership, as well as the full meaning of the second amendment in a contemporary context, are still hotly contested.

As of late, one weapon has come to be the centerpiece for the modern American debate: the AR-15. Built to resemble the military-issued M-16 and M-4 automatic rifles, the AR-15 is an American icon that is internationally recognized as a symbol for its influence and power. The continued discussions concerning whether or not the AR-15 should be protected by our constitutional right to bear arms have increased sales and demand for the firearm in recent years. People on both sides of the argument have rallied behind the AR-15 both as their symbol for gun control and for gun rights. It is frequently carried during both protests and counter-protests–as a symbol or as a warning. As the rise in shootings of both innocent victims of police and police officers themselves has increased, the AR-15 has continually found a place on American news channels.

This mass popularity and exposure revolving around political issues has given rise to the AR-15 being seen throughout American culture. Since its inception, the AR has been viewed on the silver screen in dozens of movies that amassed millions in revenue. War documentaries, gangster flicks, and others feature this weapon. John Wayne carried this weapon in several of his movies. The AR is not only featured in movies, however. References to it are made throughout all types of popular media and modes of self-expression. It has been written into literature and song. It can be seen in internet memes and pictures, on clothing as a symbol of power or a political message, as tattoos, and as numerous other variations that seem to be becoming increasingly creative and diverse.

In addition, the AR itself has reflected some of these new ways of viewing the weapon. For example, there is a version of the weapon that features a Hello Kitty emblem, combining the supposedly innocent with the supposedly dangerous. Other versions demonstrate national pride with decorations depicting the stars and stripes of the American flag. AR prices have dropped in accordance with an item that has become more common, making it accessible to many more households over the years as well.

The AR is not only seen as a symbol; it is indeed one of the most customizable firearms available as well. The aftermarket supplies for the weapon are nearly endless, benefiting from the lower base price of the firearm because more people want to express themselves by making it unlike others. Inversely, this ability to customize the weapon is also cited as a major reason they are such a popular commodity. The AR-15 offers a full personalization of the rifle through the ability to switch out both AR Uppers and AR Lowers.

So what exactly is this icon of American weaponry?

The AR-15 is, technically speaking, a brand name, like Apple or Clorox. Similar to Apple and Clorox, the AR-15 has come to symbolize a specific market, and the term is used to represent all semi-automatic guns that look like the AR–just like there are few people who do not associate Clorox with bleach, even if that is not the bleach brand name they intended to use. The AR-15 has become the image people have for nearly all semi-automatic weapons, which is a tribute to the success of the brand and a testament to just how popular it has become.

Contrary to what some believe, “AR” is not an abbreviation for Assault Rifle. Instead, it stems from the company that conceived it, ArmaLite. ArmaLite has produced several other weapons as well, including the AR-1, AR-7, AR-16, and AR-17, but none have achieved the popularity that the AR-15 has. Since ArmaLite was founded in 1954, it has strived to manufacture civilian weapons with modern technologies and materials. In the company’s initial business plan, ArmaLite also laid out their intentions of crafting weapons for government and military use. In other words, from the outset, the AR-15’s history is interwoven with the concept of military-grade weaponry.

Civilian improvement of a military rifle.

Between 1954 and 1956, ArmaLite developed the AR-5 survival rifle for the U.S. Air Force. It was a .22 caliber bolt-action, modular rifle with a four-round magazine. The weapon was designed to not only be waterproof but also to float. It was ideal for downed fighter pilots and has been adapted to the Henry U.S. Survival Rifle. Simultaneously, the U.S. Army began to search for a replacement rifle to the M1 Garand, which saw a lot of action during World War II. The magazine capacity needed to be improved while also making the weapon lighter. The AR-10 featured a lightweight aluminum receiver and plastic stocks and handguards, weighing in at about seven pounds. The military saw the potential in the design and asked ArmaLite to produce a smaller-caliber version of the AR-10 design.

The end of the 1950s would see the sales in the AR-10 not doing well and most of ArmaLite’s revenue being generated from the AR-5 aquatic survival rifle. In 1959, ArmaLite licensed both the AR-10 and AR-15 designs to Colt Firearms; Colt then sold the early AR-15 rifles to what was then the Federation of Malaya (know known as Malaysia). In 1961, the U.S. Air Force performed tests on the rifle and made a mass purchase. By 1963, they standardized the AR-15 and referred to it as the M-16. The U.S. Army entered the market of the AR-15 that same year. By 1965, the M-16 was the military’s primary service rifle, with over 300,000 purchased from Colt. During the 1980s, ArmaLite was incorporated into the Elisco Tool Manufacturing Company out of the Philippines and ended operations in the U.S. Around that time, Colt also lost their government contract to supply M-16 rifles to the military.

The late 1980’s would see AR-15 Rifle patents expire, and a weapons manufacturer known as Eagle Arms begin to produce complete AR-15 rifles for the everyday consumer. Colt would make a reemergence in the late 1990s and attain another contract to supply the military with M-16 rifles. The 21st century would see some of the most heated debates surrounding the AR-15 and its uses for civilian life. It continues to be one of the most popular rifle platforms ever created, though some current legislation would halt its production and sales in certain calibers. These legal issues, though, have only been associated with an increase in the amount of AR-15s for sale. The AR-15 has been, and will continue to be, a highly sought-after weapon, though it is uncertain what government officials will try to mandate (if anything) in its future. To find out more information on purchasing an AR 15 , owning, or operating an AR-15, check out a trusted online gun store.