There is no shortage of rails in the marketplace for the AR-15. The usual suspects are the magpul drop ins, quad rails, free float rails and many variations on those. For many years it was an all or nothing mentality for AR-15 owners, you either kept the generic handguard or put a quad rail which was commonly referred to as a cheese grater on your gun. It does not take long for you to realise the added weight and uncomfortable ergonomics of a standard quad rail is not practical.

Companies started to develop inserts and protectors to make the quad rail more comfortable and rounded as the stance was adjusted to a more forward position on the handguard. However this added size in most cases made grabbing your handguard on par with grabbing the fat end of a baseball bat. Not ideal in most cases to say the least.

Free float rails have been adapting and changing to accommodate a less is more mentality, by developing ergonomically inspired round thin handguards and adding places to mount Picatinny rails. This provides the user with a lighter, smoother handguard, without sacrificing the ability to position lights, grips sights, and other gear as needed on the weapons system. This new generation of handguards have stepped it up again adding new types of connection systems such as the key mod and the new magpul M-LOK system. These are designed to no longer require the mounting of picatinny rails instead creating a line of gear that connects directly to the rail further lighting the equipment and allowing attachment point without need to access the underside of the rail system.

ALG Defense and subsidiary of Geissele is ahead of the pack when it comes to free float rails. We have been testing and using the ALG Defense ERGO Free Float Rails with thousands of rounds of ammo and have been very impresses with what it has done for us.

The Ergo Modular Rail or the abbreviated EMR is available in 3 sizes 10″, 12″ and 13″. For this review we are going to focus on the 10″ as that is what we have run the most. We have obtained a 12″ and will be using that for a future review on a 3 gun build we are working on.

Accessory rails can be attached anywhere along the length of the rail in 45° intervals, including the standard 12, 3, 6 and 9 o’clock positions. The 12 o’clock rail will “co-witness” with the top of an M4 upper receiver for use with any front BUIS.

The ALG EMR also includes 2 standard non-rotating QD slots on either side of the rail.

Accessory rails are attached via a captured slide nut (more on this below). 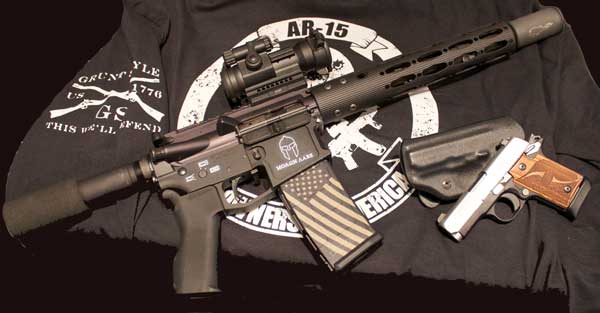 If you have built a AR in the past you know that installing the barrel nut can be a pain in the ass. For one it requires a torque wrench to ensure proper fit. In many cases getting the nut to properly index, allowing for the gas tube to fit is a challenge since all manufacturers do not have the same timing on the threads.

ALG built the EMR in a way that eliminates the need for special tools as well as ensuring proper timing with all upper receivers even the most out of spec ones.

ALG has a colored shim system that will allow you to attach the rail and receive perfect timing.

To start with you put the black shim on and then secure the barrel nut. You will hand tighten it and back it off 3 times to accurately seat the shim. The supplied barrel nut wrench will have a series of grooves that are used to determine which shims you need to install. The instructions will show you which notch represents which color. When you use the chart and find the proper color back off the but add the new shim and retighten. The wrench pre-torque should lien up perfectly now and simply tighten till you are lined up properly with the gas key.

Using the supplied barrel nut wrench (no extra purchase required) it is easy to get the perfect timing and perfect torque without the need of special tools.

Once the nut is in place you simply slide the rail on and secure it using 6 screws. It will fit over almost all muzzle breaks including my large KX3.

In the box you will receive 1 cowitness picatinny rail for mounting a front sight or other optic as well as 2 low profile picatinny rails.

There is no top series of picatinny on this rail as it is designed to be light and modular. If you need real estate for optics forward of the upper receiver this may not be the best rail for you. The first attachment point is about 3.5″ forward of the upper so it would be to far away to mount an optic on. Even with a large aimpoint PRO red dot and a 4x magnifier I can not find a reason to have to mount forward of my upper so personally this is not an issue. Just something to be aware of.

The lack of upper picatinny on the top was an advantage to my shooting style and I found it much easier to shoot that my Midwest Industries FF handguard that I had used previously.

These M1913 picatinny rails can be mounted at either the standard 90 degree positions: 12, 3, 6 and 9 o’clock but also at 45 degree intervals. This makes mounting a 45 degree offset back up sight or a light much easier.

We have been trained using the thumb over grip and mounting my light at the 45 between 12 and 3 makes it easy to activate with my thumb without changing my grip. With this rail system the light is held very close to the frame and I find it far more comfortable than running a 45 degree offset from a top mount as you would on many other handguards.

Various manufacturers have tried to develop a system that allows for a round handguard with the ability to attach picatinny rails to the aluminum handguard. There have been many flaws with how this has been done in the past.

Threads in the aluminum handguard itself lead to easy stripping which render that spot useless for mounting. If you’re in the field and you strip on of those holes you’re going to have a very bad day.

Another option was having actual nuts inside the rail. This poses an issue requiring all mounting to be done off the gun and then slid onto the weapon system. When using a flash suppressor like the KX3 there is not usually room to slide the handguard on. In the field it is also very difficult to work with this type of solution.

ALG has developed a steel slide nut offering improved strength for threading as well as an easily captured system so that you can install rails on handguard that is already mounted. Even when using with the KX3 I had no issues with getting the steel slide nut installed.

The 10″ rail from ALG will cost $135 retail and can be found at online retailers sometimes a bit lower. This is significantly less than most other free float rails on the market and was a driving factor in my decision to purchase it. It was only after getting my hands on this rail that I learned about the shim and barrel nut assembly as well as the advanced steel attachment system. Now knowing what I know it will be tough for me to buy anything but ALG handguards moving forward. I will admit that I plan on purchasing a Geissele M-Lok for review purposes however. If ALG made a M-Lok I would likely buy that instead.

The finish on this handguard is fantastic and it has held up well in both the black and desert dirt colors. It has held up to connecting and removing the QD as well as numerous installations on various guns for testing purposes. Rolling in the dirt as well as resting on block of wood at the range while shooting have not beaten it up yet.

It is lightweight yet durable. While the lack of an upper continuous rail may be a deal breaker for some others will find it a joy to hold. If you can I recommend you get your hands on one to see for yourself.

You can purchase the full line of rails as well as triggers direct form ALG http://algdefense.com/rails.html