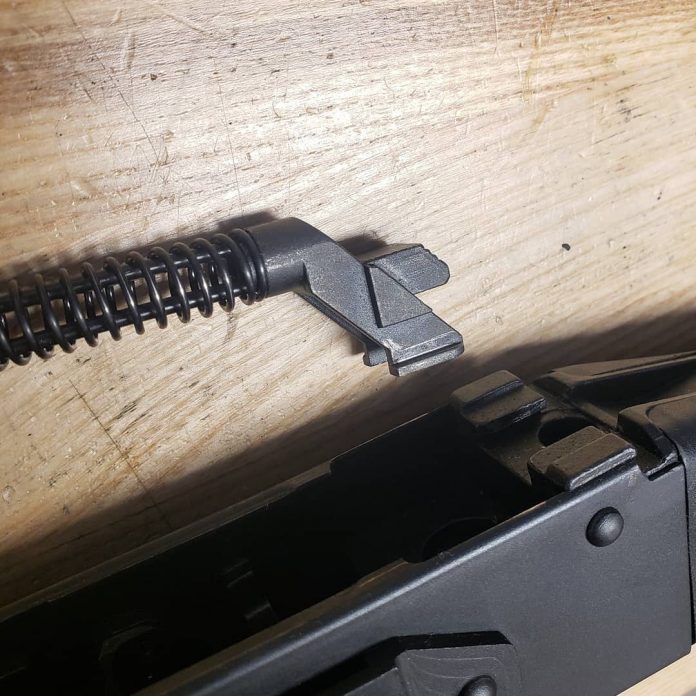 With AK’s taking over the market, more classes being held, and Rifle Dynamics Red Oktober event coming up, it is critical to ensure that simple things are installed on your AK correctly. One of those main things being the recoil spring.

This issue was found during a standard inspection of a large batch of American Made (well..American assembled and partly American made if we want to be particular..) AK-47’s. The Company will not be named.

A standard recoil spring on an AK has a rear guide that fits into a slot on the rear trunnion. Once that rear guide is seated the hinged or free dust cover is meant to basically pop over the back of the rear guide and click into place. Thus making the recoil rod have two jobs, cycle the weapon and hold the dust cover in place.

The recoil rod is constantly getting pushed during cycling and also during assembly and disassembly. Anytime there is friction burrs can be made. It is a very normal thing and can happen to any firearm. In this case, on the rear trunnion where the rear guide fits into burrs can sometimes be found. With how tight that trunnion is where the guide seats the burrs can be minimal and it could still cause two major issues.

Burrs found in the rear trunnion slot can cause the rear guide to not fully seat to the back of slot. This can cause issues during cycling or even permanently damage your guide rod, such as bending it.

A sharp piece of metal flying through the air under pressure of gas expelled from a firearm. Fun.

To fix these two possible issues all it takes is a skinny hand file. A few quick passes of the hand file inside the trunnion slot should remove the small burrs that are there. To verify, replace the spring and ensure it reaches all the way to the back of the trunnion. Install the dust cover. During racking and a functions check keep an eye on that rear guide now seated in the dust cover. If it “pops” into place during racking then obviously it wasn’t totally seated in the first place. Disassemble and take a few more passes with the hand file.

Note: Lube should still stay on just the bolt on AK’s so focus on removing the burrs and not immediately going to lube.

Seeing with your eye if the guide is seated in the trunnion takes time and honestly just takes a number of AK’s being in your hands and eye sight to start noticing when it’s not seating. You won’t notice the burrs with your eyes but you’ll notice the placement of the rod in the back of the dust cover.