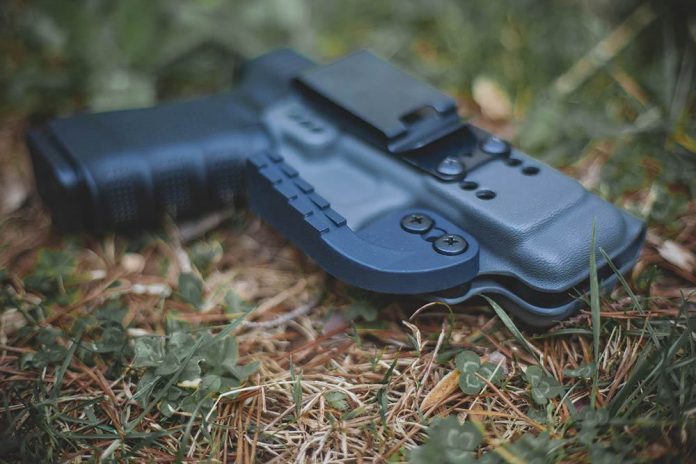 The key to flawless concealment easily comes down to finding a solid holster that does the hard work for you. With a copious number of failed holsters stuffed into multiple bins, I, like most serious concealed carriers, understand the struggle is real to find a system that meets those CC requirements. Dark Star Gear looks to help concealers revive older designs in their journey for better concealment with a new holster attachment ominously named The Dark Wing.

What is the Dark Wing?

The Dark Wing is a holster accessory that attaches to most common AIWB style holsters on the market. The attachment features standard industry hole spacing and works alongside standard #8 screws. Mounting to the front of AIWB holsters between the dustcover and trigger guard, the Dark Wing’s ramped construction presses against wearer’s belts ultimately rotating the grip inwards. The result? Reduced printing and better overall concealment. Installation of the wing is simple, just remove the previous attachment with a screw driver and place the Dark Wing in its stead. (Photo: Jacki Billings/Guns.com)

While the Dark Wing boasts compatibility with non-Dark Star Gear branded AIWB rigs, the attachment also works with existing Dark Star Gear holsters. I comfortably carry with the Orion, Dark Star Gear’s dedicated Glock 19 holster, on a daily basis but would the Dark Wing add any additional concealment to my already successful set-up? With a screwdriver in hand, I installed the attachment determined to find out whether it was possible to further elevate my AIWB concealment.

Concealment with the Dark Wing

I’ll admit I was skeptical at first. The Orion already features an RCS Vanguard Claw — one that has served me well for a while — so could the Dark Wing really compete or make a noticeable difference? In short, Dark Start Gear knew exactly what it was doing in creating the Dark Wing. From the moment I secured the Orion to my belt, I noticed a discernible difference in both fit and feel. The Dark Wing’s textured wing gripped my jeans more securely than the RCS Vanguard, really grabbing onto the fabric and reducing movement.

The Dark Wing does a superb job of concealing thanks to the angle at which it orients the gun. (Photo: Jacki Billings/Guns.com)

The Dark Wing also benefits from a greater thickness than the original claw. This extra junk in its trunk provides more rotation of the grip, thus pulling the gun’s grip further into the body. For AIWB, this is not only a neat party trick but also a necessity in order to conceal mid-size or full-size handguns. The added thickness goes the extra mile to fully conceal my Glock 19 even in the most difficult outfits. The Dark Wing does a superb job of concealing thanks to the angle at which it orients the gun. (Photo: Jacki Billings/Guns.com)

To really put it to the test, I pulled out a white and blue striped long sleeve t-shirt that often proves difficult to conceal my G19. The thin, white fabric is quick to show the Glock with standard AIWB holsters so it was perfect to test alongside the Dark Wing. With the Glock nestled in the Orion and the Dark Wing providing that counter pressure against my belt, I donned the shirt and to my surprise, the setup worked. The Glock’s grip pushed into my abdomen, concealing its normally blocky appearance. That’s a win in my book!

The Dark Wing didn’t impede any other action related to concealed carry. It allowed me to draw and present with the Glock as normal. The holster rode comfortably and securely while I went about my daily business.

The Dark Wing is a must have for AIWB concealers. Its lightweight build adds no extra weight to the holster, while it’s textured construction and thick design achieve better concealment. Best of all, it works with existing holster platforms so for just a few extra bucks, you get earn added concealment. All in all, the Dark Wing gained a permanent spot on my Orion holster. For, $11.99 it’s a worthy upgrade to any AIWB set-up.

The T-Series L2C – An Active Holster for an Active Lifestyle