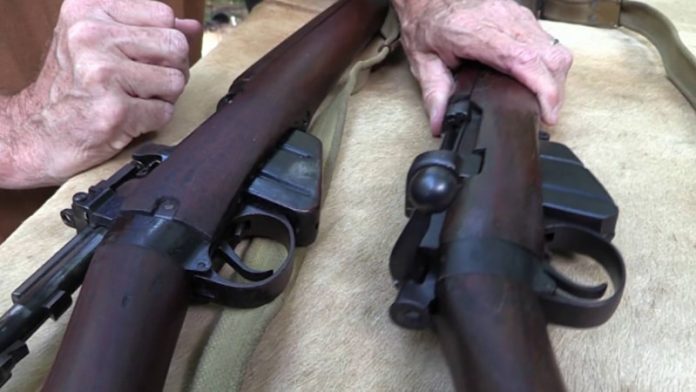 The typical British and Commonwealth infantryman of World War II carried a Lee-Enfield bolt-action rifle and Hickok45 has a beautiful 1942-vintage No. 4 Mk 1* example to try out.

Designed with experience gained fighting Mauser-armed Boer Commandos in South Africa, the Brits adopted the Short Magazine Lee–Enfield in 1907 and continually tweaked the design, using the rifle through both World Wars and the Korean conflict– only replacing them with a semi-auto version of the FN FAL (designated the L1A1 SLR) in the 1950s.

With its 10-round detachable magazine and Tommies trained to deliver “10 rounds, rapid” British troops could cough up a lot of firepower.

In the first part of WWII, the Brits put the No. 4 Mk I variant– with different sights and a slightly longer and heavier barrel with a simpler nosecap– into production, and that is the model Hick has his hands on, made in the third year of WWII at Royal Ordnance Factory Maltby.