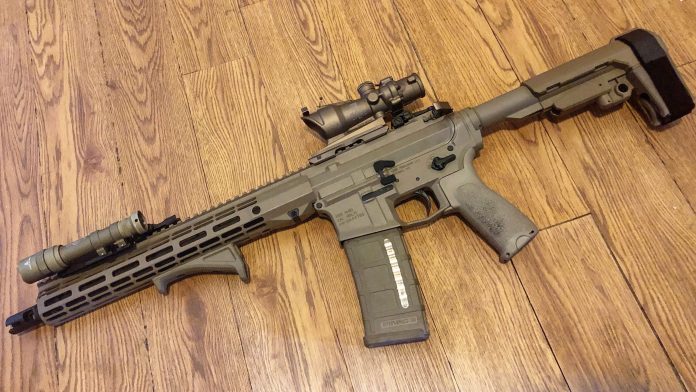 At this point if you have not heard of Aero Precision I need to know where you found your rock, I’m gonna go hide under there the next time the internet gets overly internetish.

For anyone who hasn’t heard nor seen Aero Precision pass across your feeds, they are probably among the best regarded manufacturers of AR-10 and AR-15 parts for the home builder. Builds are Aero’s specialty and helping you with the parts you need for your first, next, next next, or the one after that is what you go to Aero for.

So when I come up with a one off project like my SCDM, Aero is there going, “Why not? Let’s do it!”

The Designated Marksman (DM) concept has been deployed successfully in GWOT theaters for several years. Having a squad member with a more specialized rifle and optic system that can extend that weapons effective engagement range. Enabling the range of observation and engagement to be further than the general issue rifles in the squad.

So what I wanted personally was was the same thing… but different.

Built on a smaller scale and conforming to the goofy legal frameworks of rifle/pistol/firearm/SBR/whatever will they think of next. Also, as a Flat Dark Earth aficionado, I wanted this project in that color scheme. Aero Precision got me started.

Why not a regular rifle?

Like stated above the DM is carrying equipment to extend the effective range beyond the standard carbine in the team, in the pictured case assumed as the M4/M4A1.

My premise starts from the assumption that the “squad of boogaloo bois,” or whatever moniker we decide on for the gram, is running MK18-like AR pistol types. In whatever hypothetical emergency that has arisen, maybe the aliens really did get out of Area 51 in September and they’re pissed, the go guns are AR pistols in a ~10.5″ configuration running red dot sights and lights.

Pistols make the most sense as they are legally the most mobile, an SBR has form requirements to cross state lines which will make it a pain. (I know, that won’t matter once the feces hit fan blades, but prior to that it’s still a thing.)

So, everyone is rolling with their MK18esk, Driveway, Cul De Sac, Truck Cabin, Alien, Boogaloo specials… which are 0-100 meter effective PID type guns. They can get you around and out of the office building, move in and around a vehicle, and are providing that significant increase in individual and group firepower that having 5.56 carbines do. Go them! Go team!

My role, and the concept of this build, is that little group’s SDM. So I needed to build this with a few performance and design goals.

The base effective range of a ~10.5″ 5.56 rifle or pistol is 300 meters (per the MK18 CQBR specs), the gun itself can reach out that far with a high hit probability on a static target from a well supported firing position. I round that listed effective range down to 50-100 meters, factoring in the ability of the shooter to positively ID threat/non-threat with the unaided eye in a more complex environment. Dot sights make eye relief and sight alignment non issues over iron sights but they do not help you see and ID.

The red line at 2500 feet per second represents the rough terminal ballistics change. This is chart is specifically referencing 62gr M855 ammunition, however different 5.56 rounds won’t drastically alter the fact that more velocity increases your terminal effects. The ~10.5″ guns are right on the edge of that efficiency drop.

In response the SCDM would get a 12.5″ barrel. Aero has a matching M4E1 receiver set with an R-ONE ATLAS freefloat handguard. The barrel and bolt would be Daniel Defense, since that time a few more options have hit the market from Ballistic Advantage, however I am more than satisfied with the DD barrel and bolt. NOTE: The 12″ ATLAS is actually 12.56″, completing another proper spec M-LOK and machining pattern slot.

Across a vast variety of ammunition, about 150 feet per second of muzzle velocity is gained over the 10.5’s. Gained by using the 12.5″ barrel is a greater distance window for that increased terminal effectiveness.

Readers… you know I like ACOG’s. I won’t rehash that topic overmuch here.

The TA31 offers a robust combat proven system with 4x optical zoom. Battery free, set and forget, and lighter than any LPVO offering don’t hurt either. It rounds out the color scheme nicely.

Receiver: M4E1 and Geissele all the things

I must say, Aero Precision, you have the most user friendly upper and lower set to build on.

Safety selector is my favorite Noveske/Magpul collaboration, their STS. The pistol grip is my preferred BCM MOD 3. Easy day.

The buffer tube, receiver end cap, and castle nut were all done up in flat dark earth by my friends over at BG Defense. Pulled from their in stock production. Capping it off on the back is an SBA3 brace from SB Tactical and on the front was a spare AAC 51T Breakout I had in a parts box.

Lumens are courtesy of a Surefire M600 Scout (pictured) or an X300U with tapeswitch.

So far, about 1,000 rounds into it’s life, this is proving to be my absolute favorite AR. The SCDM feels and handles lighter than either of my 8.5″ guns, the LWRC M6IC PSD and IWI Galil ACE. It comes at the trade off of being a longer gun though and doesn’t stow and go quite as nicely.

This Aero project was 100% a recreational build. The SCDM was an entertaining concept from a goofy train of thought that proved out into a fantastically working rifle… or carbine… pistol? Firearm?

That’s another neat technical note about the SCDM build’s spec sheet. Due to the fact it’s measurable OAL (minus brace, that’s a non measurable accessory per the ATF right now) is over 26″ it can be built as an “Other Firearm” per Title I definitions instead of a “Handgun” under the same title rules. It is up to you, the assembler, to be certain of the legalities of what you are building from the receiver and unto which Title I definitions you want to ascribe your final product.

Now go get started on one!

Second Portal to feed the things from the first portal.