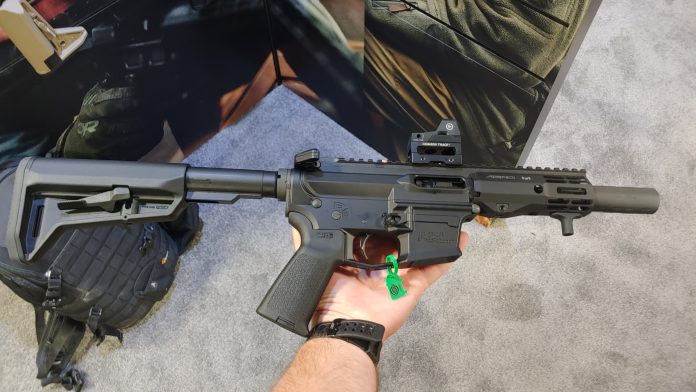 Aero Precision is one of my favorite AR 15 companies. They make a great product and do it at an excellent price point. The new PCC is a AR 15 based platform that’s designed off of the Aero Precision M4E1. This isn’t just a converted AR 15, but a purpose-built design that just uses the AR 15 as it’s basis. The PCC is brand new, in fact, the guys at Aero said they haven’t even finalized the name yet. I stopped by their booth at SHOT Show and took a peek at the new pistol caliber carbine rifles and pistols. They had numerous models, including full-sized rifles, micro-sized pistols, and even SBR variants.

What Makes the Aero PCC Different?

One of the big things is the magazine release. It’s extended quite a bit to make mag changes quick and easy with the weapon. This was a purpose-built deal to make the Aero PCC a bit faster for PCC multi-gun or USPSA matches. The extended latch makes it easy to reach with the trigger finger of the firing hand.

The gun has a last round bolt hold-open device that is built into the upper receiver. If you already have a lower the upper will give you that capability. The MSRP is 249.99 for both the upper and lower receiver. Both parts will be sold separately as well. The receiver kits do have a few proprietary parts, but those are all included when you purchase the receivers. The Aero PCC will be available as a builders kit as well.

The Aero PCC takes Glock magazines and the builder’s kits will be compatible with a few different calibers depending on where you go for bolts and parts. The PCC will be released at the end of the First Quarter, and hopefully, they’ll have a better name than Aero PCC.

For what’s its worth I found myself quite attracted to the Aero PCC. Thre are a lot of PCCs out there, especially in the AR realm, but the Aero model is gorgeous. I also have a lot of trust in Aero Precision and the gun’s feel and look rock-solid. I’m excited to get my hands on one and see just how awesome it is.