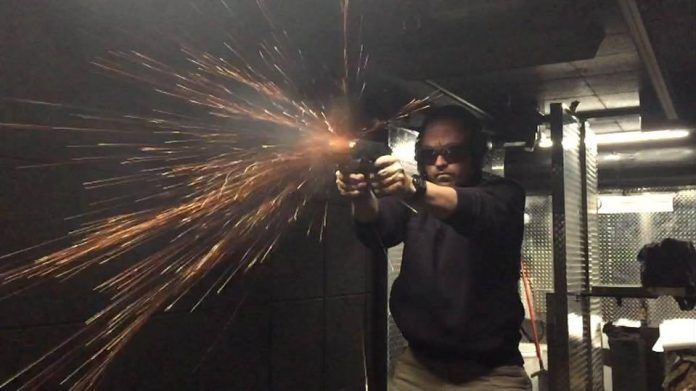 As defensive-minded shooters, we’re always preaching about how it’s important to train under adverse conditions, or train under stress. But what if there was a way that you could induce stress on yourself beyond just the stress of competition? Well let me tell you story.</p>

It’s 2012, and I’m at Bianchi Cup. Thursday morning I’m scheduled to shoot the Falling Plates, one of the toughest events at the Cup. You have to shoot a plate rack at 10, 15, 20, and 25 yards. You get two passes at each distance, for a total of 48 shots. Each plate is worth 10 points, and unlike the paper targets on other events, there are no 8 rings to help salvage a bad shot. It’s either hit and score and 10 points, or miss and score zero for that plate. Oh yeah, and if that wasn’t hard enough your shots are limited to six per string and there’s a par time. Piece of cake, right?

Back in the day, Bianchi Cup was the crown jewel of the shooting sports. The prize tables were off the charts, people would win cash, guns, and other high value items. No $20 leather holsters on this prize table; in fact either the 2011 or 2012 match, my shooter’s goodie bag had an Aimpoint Micro in it. It also had a sense of pomp and circumstance to it; on Wednesday there was a big social BBQ dinner for all the shooters, and on Saturday evening there was a formal awards banquet. The banquet was such a big deal that many of the women shooters in attendance would go all out on their attire, creating an event almost like a Gunslinger’s Prom for the competition shooting season. It was glorious, and like all good celebrations, once the guns were put away, the booze would flow. Boy would it ever.

So there I am, Wednesday night at the social BBQ. I’m 29, and celebrating the last year of my 20s like it’s my job. I’d driven down on Sunday so I could use the practice range, and I am partying my balls off. Like many of the shooters at the Cup who aren’t there to win, I’m there to have a good time, and test my skills a little bit; but mostly to have a good time. After I got fished out of the pool fully clothed and lamented ruining a good pair of cowboy boots, I decided it was time to retire for the evening since I did have to shoot the next day, and I was scheduled for the Plates first thing in the morning.

Hoo boy, did I regret that. I woke up the next day feeling like Chekov in Star Trek VI after drinking Romulan ale. I had a world-class hangover, and just wanted to go back to bed and regret my life choices. But I had to shoot. I made it to the range and got on line just to see I was shooting the same relay as Bruce Piatt, who is one of the best Bianchi shooters in the world. “Great, just great” I thought, chambering a round in my 38 Super Tanfoglio Stock II.

As the first timer sounded for the first relay, I just wanted everything to be over, so as my front sight settled on a plate, I hammered the trigger. “The faster I shoot the sooner this is over I can go back to bed,” I thought. I hammered again on the second string…and I got all six plates again. At 15 yards I went 12/12, and again at 20 yards. At 25 yards I suddenly realized I could get a perfect score if I didn’t mess up…so of course I missed a plate. I ended up 47/48, which put me in the top 10 in my division on that event. Nice.

Now, here’s the thing. I’m not saying you should go out and get hammered before a match, because there are lots of reasons that this is a terrible idea. But for me, in that moment, it actually helped my shooting. Why? Well, because I was so miserable I completely tuned everything else out except for the sight picture and the trigger. I didn’t care about where I finished, I didn’t care about who I was shooting against, and I certainly didn’t care when it started raining (side note: all of my best shooting I’ve done in the rain and I HATE shooting in the rain). The misery of being mercilessly hung over allowed me to let go of the external pressure I was putting on myself and just crack rounds.

To put it simply, remember the scene in the Last Samurai where Tom Cruise suddenly figures out how to sword fight, because the dude says “too many minds” to him? Sometimes, you have to let go of your feelings and just live in the moment, even if that moment is you being hungover as hell.