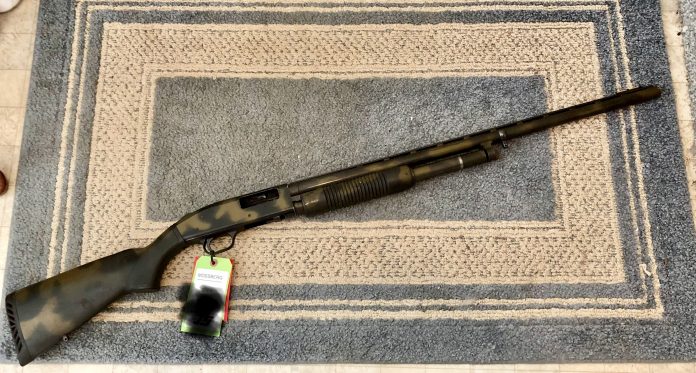 I recently welcomed a new “pet” into my home. She’s a bit of a senior girl, but still has a lot of life left in her.

Okay she’s a shotgun, not a Corgi, but I discovered that the used gun “adoption” process is not unlike bringing home a pet.

I am usually a buy-once-cry-once gal when it comes to guns, but when I found myself in the market for a tactical/HD shotgun, I decided that with a kid heading to graduate school and needing financial help, that I probably should not be buying any new guns this summer.

New tactical 12 gauges run in the 400 dollar and up range so my challenge was to try to rehabilitate a used gun on a budget.

Welcome to my New Project!

I started my search with calling around to several local pawn shops to see what they had in stock. Pawn shops are not unlike the local dog pound or humane society in that they are full of cast-offs that other people don’t want. I feel bad for all those lonely abandoned guns, but unfortunately I can’t take all of them home with me.

I had a little fun at the first pawn shop I visited, because I think the older guy in the camo ball cap thought he was going to “little lady” me. Admittedly, I was in my office wear and not tactical pants, but imagine the look on his face when I started unscrewing the end cap of the shotgun he just handed me, and started pulling the barrel off!

It was an 18.5 inch barrel, so that would have saved me money by not replacing it, but this boy had a good bit of mange on the underbelly, so I’d have probably needed to replace it anyway. Since I was just beginning my search and had a few other shops to visit, I thanked the man for his time and moved on. He was still gaping when I left.

The second pawn shop was where I hit paydirt. They had a Mossberg 500 12 gauge and were only asking $119 for it. The reason it was so cheap was not because it was due to be euthanized, but because the previous owner had taken a can of spray paint to it – presumably for turkey or waterfowl purposes. But it wasn’t even a full-on camo job – it was just squiggles of goldish-tan. This gun was an older model with a crummy paint job, but the action was smooth, the trigger was crisp, and the safety worked. The inside of the barrel didn’t even look bad despite the paint job on the outside. But because it was 26 inches long, I’d be replacing it with a shorter “tactical” version anyway.

Just as with adopting from a rescue group or humane society, you have to prove that you are a fit pet owner before you can take a gun home, so I filled out the forms and jumped through the hoops just as I would at any gun shop. We dealed a bit and I ended up out-the-door tax-and-all for $110 cash. I thought I did pretty well.

I got my new pet home and immediately tried to find out how old she was. You can apparently contact Mossberg directly with the serial number, but I found a partial serial number chart online which gave me a ballpark idea.

This girl was about 30 years old. No spring chicken, but she looked to be in decent shape for her age. She had a synthetic stock and forend and no obvious rust.

Taking her to a professional groomer would have defeated the purpose of a budget makeover, so I ordered a “care and keeping of your pet” book online and watched a couple videos before getting started on what was probably her first thorough bath since the Clinton Administration.

I took the stock off first, and though there was a good bit of crud in that seam, it did not prepare me for the debris that spilled out when I took out the trigger assembly. Wow, this girl had a bad case of fleas – but it was just crud, no rust. At least it wasn’t heartworm. A good bath and application of preventive should take care of everything.

That’s where I am so far in my adoption journey. The parts are still in the soak-and-toothbrush stage, but I am pleased with how everything is cleaning up at this point. I think my new pet and I are going to be very happy together.

In the meantime, I liked the pawn shop (and how I was treated) so much that I may make a little room in my safe with some cast-off safe queens of my own. Besides making room in the safe, that would give my makeover budget a little more breathing room too.

I may just leave the receiver as is for now and not refinish it yet. I haven’t decided on Rustoleum vs a true Cerakote job. I likewise haven’t yet decided if I want to home-hydrodip the stock and forend or if I want to spring for new Magpul furniture. We’ll see what the budget and my home skills come up with. I’ll be sure to update when she’s all finished and ready to become my new Emotional Support Gun.