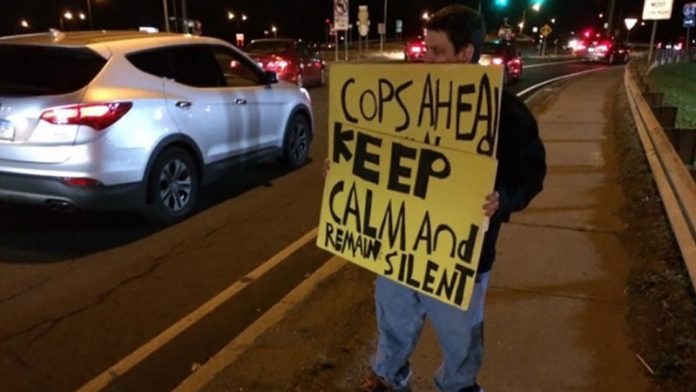 On Sept. 11, 2015, Michael Picard, known locally as an open carry advocate, was protesting at a Connecticut State Police checkpoint in West Hartford, which he feels are contrary to the Fourth Amendment, and a waste of public money. Standing several hundred feet from the checkpoint, Picard held a three-foot by two-foot yellow sign reading, “Cops Ahead: Keep Calm and Remain Silent.”

At the event, he had his camera, phone, legally carried pistol and pistol permit confiscated by troopers. He was subsequently cited by the troopers with use of a highway by a pedestrian and creating a public disturbance, then released.

However, what the state police did not apparently know was that Picard’s camera, left on the light bar of one of the trooper’s cruisers, was still recording and captured both the exchange and their conversation on how to charge Picard. In the video above as well as court documents, Master Sergeant Patrick Toreno says they can, “claim that in backup, we had multiple people” complain about Picard but that they “didn’t want to stay and give us a statement, so we took our own course of action.”

The ACLU contends there was never any such complaint to the police that evening.

At other points in the video as well as a longer version posted by Picard himself, troopers are heard saying “we gotta punch a number on this guy,” which the ACLU points out is slang for opening an investigation and “we really gotta cover our asses.” They also tell Picard they had reports from “motorists coming by that the weapon was in your hand,” though he contends the only time it left the retention holster was when troopers removed it.

The citation issued Picard notes that “several motorists complained about the exposed weapon, some complained he was holding a weapon in his hand.”

In court documents, attorneys for the ACLU contend that Hartford Police advised state police prior to the checkpoint that Picard would likely be there and that he was “harmless.” During the taped discussion on how to charge Picard, troopers discuss calling Hartford to see if they had any “grudges” against the activist.

The citations, which carried a fine of $178 plus court costs, were sent to Connecticut Superior Court, and later dropped.

The suit claims that Picard’s First Amendment rights were violated when police restricted the use of his camera and smartphone and that by taking the devices and his firearm, though they were later returned, his Fourth Amendment right against warrantless seizure was violated as well. Named as defendants are troopers John Barone, Patrick Torneo, and John Jacobi.

“Police should be focused on public safety, not punishing protesters and those who film public employees working on a public street,” said ACLU-CT legal director Dan Barrett, who is representing Picard in the lawsuit, in a statement. “As the video shows, these police officers were more concerned with thwarting Mr. Picard’s free speech and covering their tracks than upholding the law.”

Meanwhile, state police say this week they are planning to review the footage for misconduct.

“We hold our Troopers to the highest standard, and now that this video has come to our attention we will forward it to Professional Standards (IA) for review,” Trooper Kelly Grant told the Courant.