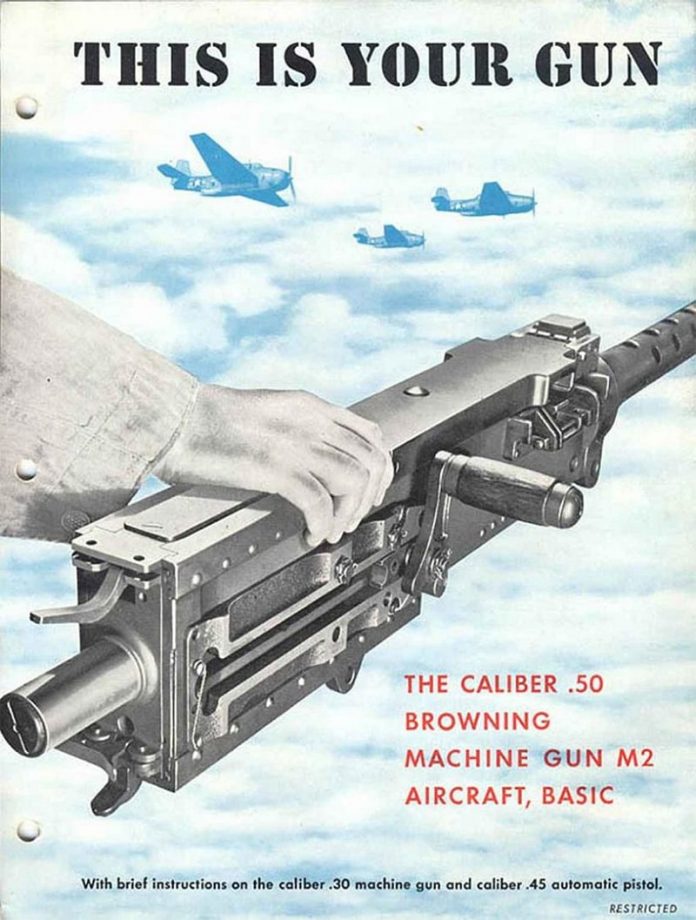 We’re familiar with the feats of marksmanship pulled off by snipers using scope-equipped .50 machine guns in Vietnam (this was also done in Korea, but less has been written about it). The Vietnam successes, particularly the late GySgt. Carlos Hathcock’s, paved the way for the development of purpose-built .50 sniper rifles (it’s no coincidence that the M82 Barrett came to fruition at the exact time that the word of Hathcock’s then-15-year-old-feats spread far and wide among serving soldiers and Marines). With all the ingenuity that was displayed in World War II, why wasn’t the M2HB used as a sniper weapon? A look at some wartime data from the Heavy Barrel’s close cousin, the aerial M2, might be instructive. The interesting website LoneSentry (which was this week’s W4) has a relevant document. They seem to alternate publishing press releases of new kits for modelers with fascinating original documents from the World War II era. And they’ve reprinted numerous excerpts from a 20th Air Force set of B-29 crew notes, which we’ll snag a short excerpt of:

There are several factors to consider in arriving at an answer to the question of how long a burst it is practical to fire. The ammunition has a high degree of accuracy. At 600 yards, when fired from an accuracy rifle held in a V-block, it will group in a circle 18″ in diameter. When fired single shot, using an aircraft machine gun on a tripod mount, tests have shown a 20″ circle of fire.

This is a Mann accuracy device, used for ammunition testing by the Army (this particular one is in 7.62 NATO on a Springfield acton). These were made in all calibers, and ammunition lots had to pass an accuracy test for acceptance.  Image: CMP (which has some of these for sale as collector curiosities).

So that’s the purpose of their investigation — how long a burst makes sense for an aerial gunner to fire. And the first thing they establish is that the theoretical accuracy of the ammunition, fired from a (presumably Mann) accuracy rifle, as roughly 2.87 MoA. (Angular calculation from here, using values of 1800 feet [600 yd] and 1.5 ft [18″]). Using the same calculator to solve angle for longer ranges, using that theoretical accuracy established at 600 yards, we get about a yard dispersion at 1200 yards and 43 inches and change at 1500. Again, this is the theoretical accuracy of the ammunition. Using single shots from an actual MG on a ground tripod (presumably with T&E, although the record doesn’t say) we see a slight degradation which makes that 1200 and 1500 yard shot on a man-sized target problematical (and with iron sights, functionally impossible). In single-shot mode, the differences between the ANM2 aerial machine gun (several variations of which are seen here) and its M2HB ground counterpart are not telling.

The information file goes on to address burst fire, of less interest vis-a-vis sniping but interesting in its own right.

In a burst of 10 or 12 on the same mount the group was approximately five feet. When longer bursts were fired, it was observed that the gun soon lost accuracy, even though it remained relatively stationary in the mount. When over fifty rounds were fired, in one burst, the projectiles tumbled in flight and dispersed over a 75 foot area at 600 yards.

Why is that? Does the barrel get “shot out” that quickly? Not exactly.

When the barrel has been overheated, it will be found that it cannot be relied upon for further accuracy even though the lands and grooves measure up well and the barrel, to all appearances, seems good. If the exterior of the barrel has a burned appearance, it should be tested by ordnance before further use. When a barrel becomes over-heated it expands to such an extent that the muzzle velocity decreases several hundred feet per second. This decrease continues as the barrel continues to expand, until a point is reached where tumbling of the projectiles takes place and controlled fire is reduced to a few hundred feet. If an enemy flew his plane to within “a few hundred feet” of a B-29, self-preservation was not high on his agenda. Pilots — German and Japanese alike — who excelled at attacking 4-engined day bombers tended to make fast, slashing, attacks from straight ahead — ahead high, if they could get up there (most of the Japanese fighters were doing well to get to the B-29’s bombing altitude). Pilots who settled in at short range to shoot the four engines out one at a time were in the convergence zone of several guns from that bomber and his cell mates, and their careers tended to the truncated.

The gunner instructors who wrote the document reached this conclusion:

The accuracy of the fire delivered, therefore, depends not only on how steadily the gun is held, but also on the length of the burst, and the condition of the barrel. If a gunner fires short bursts of three to five rounds, constantly using his sights, he will have a tight group and a high degree of accuracy. This is the most effective method of firing your machine guns.

Now, this has always been the advice for ground gunners using air-cooled guns, but it’s enlightening to see aerial gunners getting the same instruction. The ANM2’s principal differences with the M2HB were: a lighter barrel and a ventilated, full-length barrel shroud, on the theory that an aerial gun would be bathed in fast-flowing cooling air. (And, at bomber altitudes, cold air: 50 to 60 degrees below zero F). But they still suffered extreme accuracy degradation, and bullet tumbling, when long bursts were fired.

Many a Japanese fighter pilot’s last sight on Earth, although this photo, of the only surviving airworthy B-29, was taken at far lower altitude. Note that the upper turret is trained forward, the lower, aft; they can both be controlled by the bombardier in the nose. And yes, the picture embiggens. Bill Crump photo (CAF).

The 20th Air Force was the one that operated B-29s against Japan, first from Chinese bases and then, after the successful Marianas campaign, from Saipan and Tinian. To bring it full circle, its commander was General Curtis LeMay, who was an absolute gun nut, and as Chief of Staff of the Air Force would drive the US adoption of its longest-serving small arm: the M16 series.