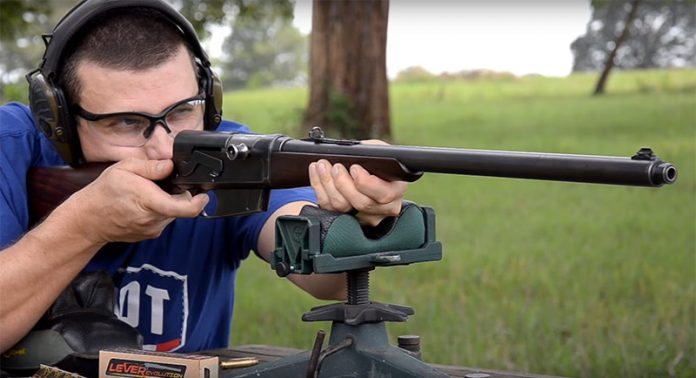 Produced until 1950, John Browning’s Remington Autoloading Rifle was a sweet shooting semi-autogun that that was a game changer for its time, and IV8888 has one to shoot.

Produced first as the RAL in 1906, then as the Model 8 and finally as the Model 81 Woodsmaster, the rifle had a 22-inch steel barrel, integral box magazine that could be filled by means of five-round stripper clips (a useful feature at the time) and came in a number of chamberings such as .25-30 Remington Auto and .35 Remington, it was a stout brush gun. The beefier .35 Rem version would only hold four rounds in the magazine, whereas the other calibers could hold five. Overall, the semi-auto rifle was groundbreakingly simple without the use of impingement gas systems.

These guns were ahead of their time and saw some limited use in World War I as well as by law enforcement (Texas Ranger Frank Hamer of Bonnie and Clyde fame used one with an extended magazine).

And the Model 8 that IV8888 is just an exceptional shooter.