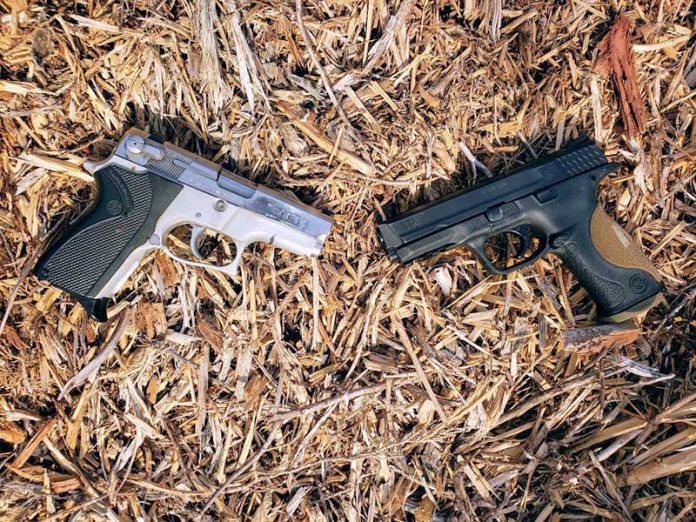 As a collector, gunsmith, and firearms instructor I’ve had almost every pistol available. From modern production to vintage firearms. So, when I had the opportunity to buy and review a couple of police trade-in’s – the Smith & Wesson 6906 and M&P40 — I jumped on the chance.

Without delving too much into 20th Century history, the origins of the M1911 and John Moses Browning are the stuff of legends. What is less well known, however, is that in 1953, the US military was looking to replace their aging inventory of 1911s. Smith & Wesson stepped up, answering the call by borrowing elements from the Walther P38 and creating the Model 39. Although the US military chose the Model 39, Smith & Wesson flooded the market with a mind-numbing array of models, variants and calibers.

Fast forward to the mid-80s when“hair bands” ruled the airwaves and Miami Vice was must-see TV, Smith & Wesson was faced with a new challenge in the form of large capacity, polymer framed, striker fired Austrian invaders. The introduction of Gaston Glock’s pistol to the NYPD back in 1985 challenged Smith & Wesson’s supreme rule in civilian and law enforcement markets. It was obvious that Smith & Wesson had to completely modernize from the ground up. With the troubling launch of the Sigma and the resulting litigation with Glock, Smith & Wesson needed a winner and needed it badly. The M&P was that winner.

The real question is how do the Smith & Wesson 6906 and M&P stack up? The 6906 is a DA/SA compact 3rd generation double-stack pistol with a stainless steel slide and aluminum frame. After its manufacture in the United States, it was exported to Israel where it protected the Holy Land before being imported by Mach1 and then into my hands.

One of the best things about the 6906 is that there are spare parts and sights and mags almost everywhere, so I won’t be high and dry in the unlikely event of a failure. The external finish and exterior has some wear and dings, but I’ve yet to see one which has appreciable wear on the internals because they’re typically carried a lot and shot a little.

In contrast, the full-size M&P40 I purchased spent its lifetime here on American soil. One thing that many shooters aren’t aware of is this is a multi-caliber firearm, being able to shoot .357SIG, .40 Smith & Wesson and 9mm. A shooter could have a three-caliber setup for a little over $500, which is an insane amount of value. Along with the versatility, aftermarket support is outstanding. For one, the author doesn’t particularly like the articulated trigger, but there are many options out there to suit my preferences better for a more custom fit. With the ability to customize accessories, the options are endless with the Smith & Wessson M&P.

The M&P sports a more natural point grip angle, modularity of backstraps, a hinged trigger safety, and the elimination of the need to pull the trigger to field strip it, the M&P burst into the market to favorable reception.

Which one would I plink with, or carry in an every day carry or uniformed officer capacity? For EDC, the 6906 works quite well. For uniformed officer carry, I would pick the M&P due to the weight difference and increased capacity. Either way, I am pleased to have these two in my collection, especially with their history and their price points.

For more, check out the product listing for the 5906, the M&P40 and other Smith & Wesson firearms inside the Guns.com Vault and collection of Certified Used Guns.