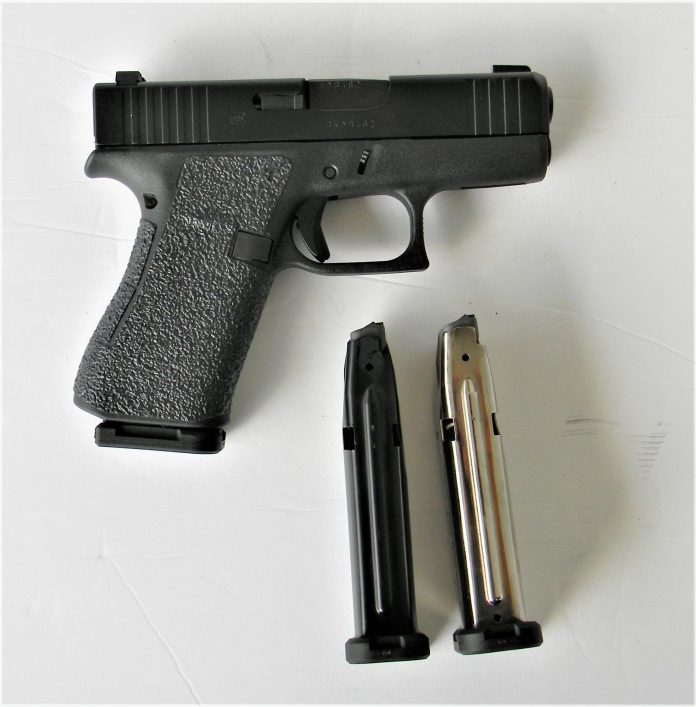 When it comes to personal defense my primary concern is accurate shot placement, control, and wound potential. Most of my personal defense firearms have an eight to fifteen round capacity. A compact handgun that holds ten rounds of 9mm Luger but has a small footprint and is easy to conceal is attractive.

The Glock 43 was a long waited slimline 9mm, Glock’s first. Glock more recently introduced the Glock 43X and Glock 48. Each features ten round magazines. This is possible as the 43X has a longer grip frame than the Glock 43. These are typical Glock magazines in design with a polymer shield covering a steel inner structure. The Glock 43 is a very reliable handgun. On that basis I am reluctant to modify the Glock or any other reliable handgun with aftermarket parts.

After a considerable test and evaluation I find the Shield Arms conversion magazines a viable upgrade for those wishing to have greater magazine capacity. Magazine capacity isn’t everything but in this case it seems well worthwhile to upgrade the pistol. Shieldarms.com

I had on hand several Shield Arms magazines. Some high capacity magazines are difficult to load to full capacity. It is good to have a strong spring but not good to have difficulty loading the last few rounds. All magazines were loaded without difficulty, just a firm push to finish up loading. I did find that when loaded to full capacity a firm slap is needed to fully seat them if the slide is at rest, not unusual.

My recommendation is to load the magazines to fifteen rounds and then lock the slide back before loading the pistol. Insert the magazine firmly home then drop the magazine. I loaded and unloaded the magazines in the pistol and found that all locked in place in a positive manner. Original Glock ten round magazines still function but require more effort to remove they do not drop free. This isn’t a important as the shooter will be deploying fifteen round steel magazines.