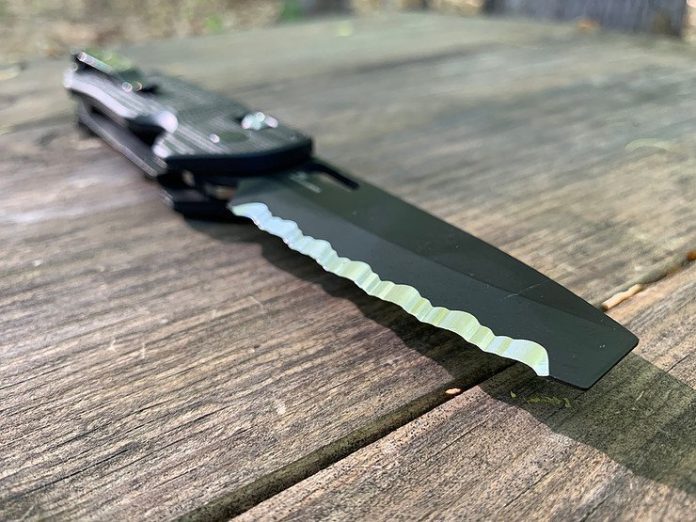 I’ve not only seen a lot of rescue tools, I’ve used a few as well. In the Ranger Regiment, we practiced extracting pilots and soldiers from aircraft and other vehicles. When you have a dedicated C-SAR (Combat-Search And Rescue) team, you have the luxury of having all the tools necessary plus the personal to operate them. If you’re like me, you still carry a few of these tools and a medical kit in your vehicle. Should a situation arise that requires you to fall back on previous training. A new tool from Benchmade that has made its way into my truck EDC is the 365 Outlast.

What appears to be nothing more than a folding pocket knife, the 365 Outlast remains pretty unassuming. A closer look reveals not one, but a pair of blades housed between the black G-10 scales. A new variation of their Axis locking mechanism called the Option Lock was developed to accommodate two blades. The butt end of the 365 Outlast features a carbide tipped glass breaker. Finally, a rescue hook can be unfolded from the back of the handle as well. Making this one hell of a versatile rescue tool.

No expense was spared on the Outlast 365. Utilizing S30V steel for the drop tip blade insures a long rust free service life. The blades and tools are also Cerakoted matte black as this falls into Benchmade’s “Tactical” and “Rescue” categories. The second serrated blade is made from CPM-3V steel and features an oxygen bottle wrench as well as a blunt pry-tip that can be used as a flat screwdriver.

Final Thoughts: The Benchmade 365 Outlast includes all the tools you’d need to hastily extricate a driver or passenger in a vehicle accident. Breaking the side window of the vehicle with the carbide tipped point will gain access to the victim. If they are unconscious or hung if the vehicle is inverted, the safety hook will make short work of any seatbelt. Allowing rescuers to pull the victim to safety. Two different blades add to the knifes versatility. The straight blade can be used to cut away clothing as can the rescue hook. The serrated blade can be used for more stubborn material. Or even a branch to fashion a hasty splint. Being prepared is key and the 365 Outlast from Benchmade is a solid choice for your vehicle preparedness kit.

Erik Meisner served in Attack Company, 2nd Battalion 75th Ranger Regiment as a rifle team leader with deployments to the Middle East, Central America and Asia. He’s a licensed pilot, SCUBA diver and enjoys Alpine skiing, shooting, Overland camping, boating, sea kayaking, traveling and golf. Growing up in a military family, Erik had the pleasure to live and ski all over North America and Europe. Now residing in beautiful Northern Michigan with his wife and 2 sons they continue to enjoy the outdoors as much as possible.