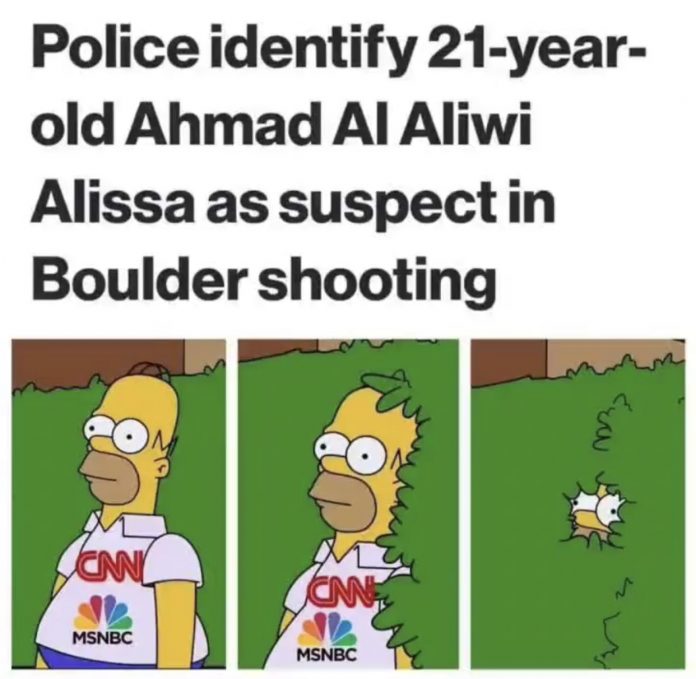 Did anyone else notice how quickly certain tweets and comments vanished after the name of the Boulder Colorado shooter was released?

These denizens of ‘internet justice’ were almost gleefully expecting another Robert Aaron Long, another man of certain ‘privileges’ that are extended to not being shot on sight by police, even after committing a massacre. So they claim.

The footage of the unclothed wounded man being taken into custody kicked off a firestorm of declarations, like the one below. Until…

Ahmad Al Aliwi Alissa. Syrian. Immigrated as a child. Grew up here. Experienced a Post-9/11 United States. Not exactly who the earlier #StopWhiteTerrorism tweeters were hoping it was.

After a week of the media, both professional and social, whipping us into a frenzy over the fact that Long had attacked Asian massage parlors. Compounded by the fact that six of the victims were women of Asian decent, the only conclusion that was possible was that the attack in Atlanta was racially motivated. Right? So they hungrily speculated on this next atrocity at the hands of a certain racial demographic… oops.

Back to Atlanta for a moment.

Completely disregarded was the stated motive from the killer himself, a completely plausible one, that Long was grappling with a sexual desire he was mentally unprepared for due to, in part at least, his religious background. Certainly race had a tangential influence in that the parlors were attacked because of a sexual stereotype, however the primary motivation (if we believe Long and don’t assign a motive for him) was that of sexual and religious conflict. Those are very old reasons to kill in humanity’s history. But that wasn’t narratively satisfactory apparently.

So, after Long was taken into custody and charged, a long (no pun intended) litany of abuse was laid out on the societal scale of just how oppressed the Asian community is in America. The Asian community themselves have had a mixed reaction. On the one hand, some are thankful the problems are being highlighted. On the other, they recognize all the signs that they are a currently convenient social pawn and that the narrative being parroted is a far cry from the dirty reality of the situation.

Among those dirty realities is the reality of unsanctioned sex work out of ‘massage parlors’ being a real and driving underground economic item. They are especially prevalent in larger urban areas, cities like Atlanta. You can argue about consensual sexual massages being grey market or black market items until we are blue in the face, but the fact of the matter is these places exist.

So given that the motivation Long stated is entirely plausible, why change it?

It doesn’t fit the narrative that tweety politico types wanted to drive, so they altered it. That alteration makes Long’s actions no less abhorrent, but it furthers their baseline racial bias narrative instead of the more complex one of a religiously motivated killing spree with undertones of mental anguish and sexual trauma or frustration. The racism card is easier, its also lazy. It doesn’t humanize Long at all and provide the murderer with possibly sympathetic qualities, and doesn’t suggest that any of the murder victims were perhaps part of something they should not be, which would make them less sympathetic. Doing either of those robs the narrative of its pure moral punch and instead seeds it as one more tragic tale of the seedier side of city enterprises.

It shouldn’t rob the narrative of anything. Those eight people, regardless of if they were engaging in consensual sex work, didn’t deserve a bullet any more than your neighbor might. Barring some radical finding like the parlors were trafficking women, the murders were as cold blooded as can be imagined. Even then, and that is a mighty hypothetical then, the murders were still driven by a religious and sexual motive, not some altruism of preventing exploitative practices.

But if we ever really want to look at preventing attacks, motive is everything. Stating that motive wrongly, on purpose, to push a political agenda is abhorrent too. Even the police are now saying that there is not enough evidence to suggest this was a hate crime, a crime driven by an ethnic or religious background, but that Long’s motive may in fact be exactly what he stated.

So that brings us back to Ahmad Al Aliwi Alissa.

A young man the same age as Long, who killed 10 people a week after Long killed 8 for an as yet unknown motive. More poignantly, how once we knew that his name was Ahmad Al Aliwi Alissa… all comparative speculation about his motive ceased immediately.

The tweety masses were happy to assign Long the motive (even though he had given his already) of racial hatred. But they are very very silent on Alissa, the Syrian immigrant.

Speculation around Alissa is suggesting his personal history included aggression, paranoia, and an assault conviction from high school. Wrestling peers stated he was removed from the team after a violent verbal outburst from losing a match in which he threatened to kill his team mates. Family, including his older brother seem to indicate he suffered mental illness. Some sources are saying his social media was rapidly anti-American, perhaps self-radicalized?

My question in this instance is, why wasn’t he ‘Red Flagged’? Why wasn’t Alissa prohibited, even temporarily due to his alleged paranoid state? What are the circumstances that led to Alissa being able to buy the Ruger AR pistol if all of this was known about him? “We” knew, combined, all of these things about Alissa ahead of time and yet NICS didn’t?

Does that perhaps mean, background checks don’t work? That someone as apparently paranoid and aggressive as Alissa is, exactly who NICS is supposed to screen, didn’t get screened? Perhaps, because they can’t?

The mass shooting suspect has made statements to investigators, Dougherty said.

“We’re collecting those statements now and we’ll be providing those in the weeks ahead,” Dougherty said. – CNN

What will those statements be? But more importantly will we (meaning the loud social voices) assign a motive to Alissa as rapidly and defiantly as we did Long?

Or does the fact it turns out it was a Syrian change the convenience of that narrative too much?

I mean.. we know that answer. But I will still ask the question.