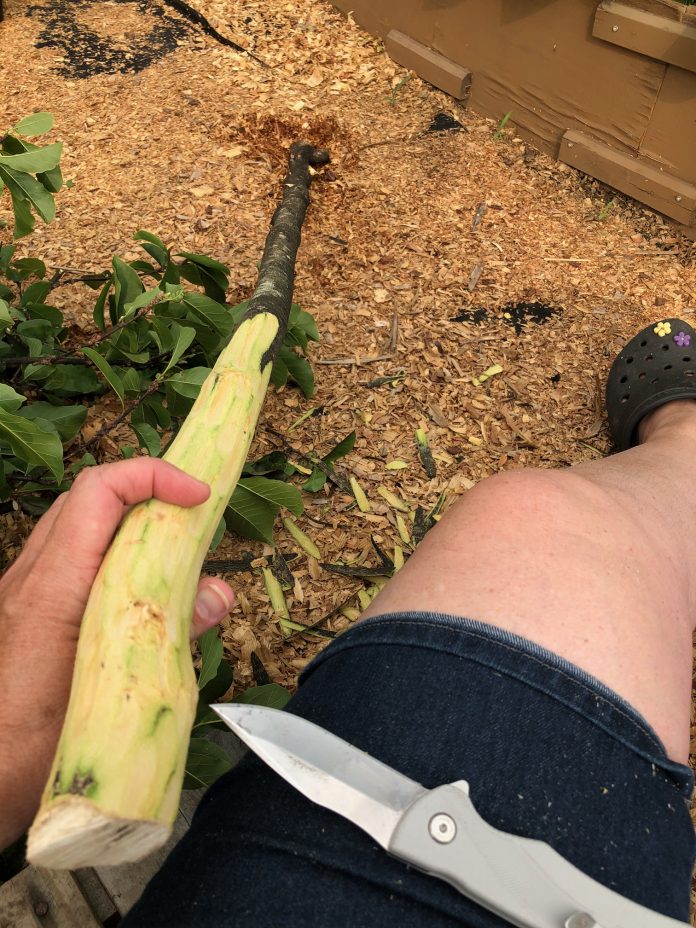 Some recent trimming of the landscaping brought me back to my childhood, and I thought I’d tell you about it.

My first pocketknife was my Dad’s. Oh how I coveted that knife. He would let me borrow it, but only after he gave me strict safety lessons about only cutting away from myself, keeping my other hand out of the way, always closing it before handing it to someone else, etc.

Not that I ever did anything useful with said pocket knife. I was just shaving sticks – “whittling”. But it made me feel grown up sitting on the front porch whittling a stick with a real knife when I was eight years old.

When I was a kid sticks could be anything. There were no computers or video games in my day – we had sticks and rocks and woods to run around in – so there was imagination involved in this whittling as well. Was this stick a caveman spear? An Indian bow? A muzzleloader? A sword of the Three Musketeers? The possibilities were limitless.

When I went to Girl Scout camp, the knife was officially mine and was put to use with more whittling  – trimming down the end of a stick to use for hot dogs and marshmallows on the campfire, and occasionally impaling bugs.

And so with that personal history, I found myself last weekend trimming out some overgrown landscaping when one of the branches called out to me that it was rather straight-ish and wouldn’t it make a nice garden stick?

What – sticks don’t call out to you? Well if not, I think someone needs to get back in touch with their childhood, that’s what I think.

I have a Buck knife folder that I keep in my pocket when I’m gardening and doing yard work. This knife has become my go-to garden tool. I won it at the Buck knife-throwing booth at SHOT Range Day one year. (I won one three years in a row actually) I use this knife to open bags of soil and manure and wood chips, cut zucchini off the vine, and pry the recalcitrant lid off the composter. Buck would probably be horrified at the abuse I give this knife. But hey – it’s a tool.

But that day my Buck knife took me back to my childhood as I sat on a pallet in my garden and stripped the bark off my newly trimmed garden stick. Suddenly I was back sitting on the porch step of my childhood home, whittling with my Dad’s pocket knife, “making” nothing in particular but a stick. It was a rather soothing experience and brought back pleasant memories of a simpler time.

Now it is the older adult me rather than the child who needs the stick these days. My garden is getting overgrown with squash vines, and the arthritis in my feet and ankles sometimes affects my balance as I’m taking giant steps and picking my way through the vines. So I thought a garden stick would be nice to have as a third point of contact when I’m gathering produce and inspecting leaves for bugs in viney territory.

I do have the aluminum alloy survival stick that I wrote about last year, but that one lives in the car and honestly it has no “soul” in its weapon and gadget-infused metallic frame. It’s just a factory manufactured tool.

But my new garden stick is living wood that I cut myself, and trimmed the branches from myself, and then stripped the bark from myself. I’ve had personal interaction and quiet garden time with this stick in only a couple of days. My garden stick and I have already started bonding. What an unexpected and pleasant surprise – just me and my stick. I’m eight years old again on a summer afternoon. It’s a nice place to be.