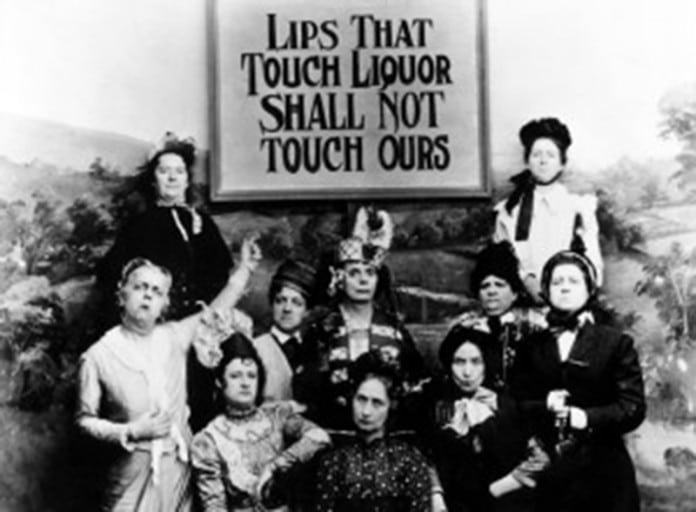 In my previous blog postings, I have presented an abundance of evidence showing that there is no correlation between increased gun ownership/availability and an increase in gun related crime. The fact is that the majority of the public believes that gun crime and crime in general are at an all time high. As I pointed out in ‘The Other Country Fallacy’, there are sets and subsets of crime. As gun homicides are a subset of all homicides, gun crime is also a subset of all crime. To get a true feeling for what factors contribute or correlate to crime rates, we need to look at crime over as long a period of time as possible and look towards important events and legislation that may have aided in the rise and fall of crime. The first variable that has been correlated with a rise in crime has to do with prohibition. The dry movement came about as a Christian moralist agenda that started in the 1840’s, but came to a head in the 1910’s. At the time, there was immense pressure for women’s suffrage, and though that was obviously a very positive and necessary action, the same women who banded together to support their rights to vote were also the same ones pushing for prohibition. One social movement supported the other and the passage of the 18th Amendment was ratified almost a year after the ending of World War I and went into effect in 1920. It’s clear that the Women’s Christian Temperance Union had fantastic marketing and campaign strategies as exemplified below.

The premise behind the prohibition movement is that alcohol was a primary driver of crime. The idea was that if the prohibition movement were able to ban alcohol, the crime rates would drop and moral values will rule the day. As history has proved, that was not the case at all. The prohibition of alcohol made it an extremely valuable commodity, one that would give rise to one of the most famously violent times in US history, the roaring twenties. The end of the first world war brought back millions of American soldiers and there was a huge boom in the stock market as well as manufacturing. This influx of money gave rise to people wanting to spend their money on leisure and entertainment. If people weren’t desperate enough to make your own wine, they had to acquire it illegally. The underground booze market was quickly capitalized on by organized crime who organized bootlegging and distribution networks that netted gangs hundreds of millions of dollars. Because there was harsh competition for money and turf where each gang held dominance, the simplest way to get rid of the competition was to kill them. There were hundreds of murders by and of organized crime syndicates, the most famous being the St. Valentine’s Day massacre (Febuary 1929), which ultimately lead to the passing of the NFA Act in 1934. Another factor that correlated very strongly with firearm related suicides was the Stock Market Crash of 1929. Figure 1 shows a significant jump during that specific period of time that doesn’t normalize till sometime in the mid-40’s.

The passing of the 21st Amendment ended prohibition in 1933, this is the point at with the climb in violence peaked and started a drastic fall because organized crime was no longer able to hold a monopoly on the illegal sales of alcohol.

What many people may not realize is that a number of other recreational drugs were made illegal during the same time as prohibition. Regulations on marijuana started to pile up, the number of people who were smoking it were increasing and  it was thought that hemp might compete directly with common manufactured and synthetic products such as paper and nylon. The billionaires of the day (Hearst, Mellon, and Du Pont) pushed hard to pass extra taxes and regulations on the production and recreational use of both hemp and marijuana. Politicians seemed bound and determined to follow in the footsteps of the prohibitionists before them by finally banning marijuana use and labeling it a schedule 1 drug in the Controlled Substances Act of 1970. Identical patterns followed with both heroin and cocaine.

From 1933 to 1937, America went through very difficult times during the Great Depression. Programs like The New Deal attempted to reform the banking system, employ out of work Americans, and restart a floundering economy. That all changed when on December 7th, 1941, Japan attacked Pearl Harbor. The war caused an explosion in manufacturing in all industries to support the effort of the Allies. During this time between the great depression and the end of WWII, homicides were on a steady and slow decline. Much of the money and power that was amassed during the prohibition years by organized crime needed to be shifted and refocused in other ways. While the government’s efforts were focused overseas during the dawn of the cold war , the syndicates were slowly restructuring and finding ways to launder the hundreds of millions of dollars that prohibition had netted them. In an effort to avoid being pursued by law enforcement, a number of different organized crime gangs shifted their efforts to a mix of  legitimate and illegitimate businesses that lay in  and out of legal grey areas, gambling, drugs, legal and illegal liquor production. Las Vegas, itself, was born on the backs of Hoover Dam workers and fueled by the mob’s desire to build a gambling mecca that would multiply their ill-gotten gains hundreds and thousands of times over. The power and the profits of organized crime grew steadily into the late 60’s and early 70’s. Along with the growth, came an increase in the crime and homicide rates. Because crime families would have leaderships roles that delegated criminal acts to be committed by ‘foot soldiers’, the Nixon administration passed the Organized Crime Control Act of 1970 to prosecute using what was called the RICO Act which, “focuses specifically on racketeering, and it allows the leaders of a syndicate to be tried for the crimes which they ordered others to do or assisted them, closing a perceived loophole that allowed a person who instructed someone else to, for example, murder, to be exempt from the trial because he did not actually commit the crime personally.” This was an extremely violent time in the history of the US, and while the government had started eliminating one source of crime, they were actively creating an entirely new source in South America.

The Iran Contra scandal is one of the more famously corrupt actions of the American Government. Iran was under a weapons embargo while, at the same time, in the middle of a war with their neighbor, Iraq. One of the primary facilitators of the ordeal, Oliver North, was involved in the secret selling of arms to Iran in exchange for money and US hostages which was then used to fund anti-communist fighters in Nicaragua. The contra rebels were able to further fund the war against the communists by selling cocaine. Since the drugs needed to be sold, there was a need to find buyers, the CIA facilitated this by flooding the US with the illegal drugs through intermediaries and directly the causing the crack epidemic of the early 1990’s. Though they vehemently denied involvement, there is there is plenty of evidence to point to the contrary.

We have now reached the period in time which was the peak of crime in American history. To get a bit more context of the years to follow, we need to step back in time a bit to acknowledge a few other variables that lead to the decline in crime that followed the peak in 1993. One man can be relationally linked to the starkest drop in crime in America, that man’s name was Clair Cameron Patterson. Clair was a scientist who had made a name for himself, having accurately estimated the age of the earth to be around 4.550 billion years old. It was during his research to determine the age of the earth when Clair came across another discovery that would greatly impact the health of all Americans. In 1965, Clair was able to prove that lead contamination through gasoline, consumer, and food products had not only general health effects, but also psychological ones. Scientists have been able to track the data between the crime rate and the use of lead in various products and have found such a strong correlation that it could be considered one of the causal factors in abnormal behavior that leads to crime. Below is a chart showing the relationship.

Another monumental event occurred during the same time period as Clair’s fight with the gasoline and lead companies. Roe v Wade was decided and abortion was legalized, federally in 1973. Considered a landmark decision for women’s right to choose, the decision to allow abortion is also credited with being a factor which helped lower the crime rates following the early 1990’s. In the image above, there is a large increase in the rates of abortion from 1973 to around 1980 and then a slow taper down to near original levels at 2011. The theories postulated and supported by scientists and economists is that the availability of abortions gave women the option to not be forced into caring for an unwanted child. Children are not only expensive to care for, but if not in daycare, they require the full time attention of a parent. If that parent is a single parent, they are condemned to being on poverty, unable to attain an education, and forced to raise children in an underprivileged environment. This acts as a vicious cycle that is constantly repeating itself and creating more and more uneducated, poor, out of work families that often turn to crime and violence. As one study puts it, “Studies have shown a reduction in infanticide, teen age drug use, and teen age childbearing consistent with the theory that abortion will reduce other social ills similar to crime.” The Bureau of Justice Statistics shows that the age groups involved in the most acts of crime are between 16-24, if we count the years since the legalization of abortion in 1973, those unwanted children would have been in those age ranges between 1989 and 1997, right when crime reached its peak and began its decline.

Crime is a multi-faceted, complex organism that is fueled by a multitude of variables. Some of these variables come from places that we would expect, a number of them do not, and some are purely speculation. So when looking at crime and how to deal with it, it is important that we try to understand it from a global view. Looking at the factors that are most likely to be causal instead of correlational (or even circumstantial) is the way in which we will arrive at solutions. There are a number of radically new theories and approaches that have real chances of success, it’s only a matter of finding the will to move past the politics and partisanship and on to action.